The NFL Draft is over, and we cannot head into the three-month abyss that is the offseason without looking at what all 259 selections mean for each franchise. Whilst too early to judge just how successful a draft class each team’s was, we can look at how rookies fit within schemes, where they stand on depth charts, and who we can expect to make an impact in 2021. We continue our team by team series with the Philadelphia Eagles:

After the tumultuous and well-publicised start to the offseason the Eagles have had, it was probably nice for them to get to the draft. A pre-draft trade took them from 6 to 12 and an in-draft trade got them from 12 to 10. I think with all of those moves they will have got the player they wanted, and that was Heisman Trophy winner Devonta Smith. The numbers during his last college season were phenomenal, but the thing that strikes you most is his technique, which is second to none. Obviously, concerns have been raised about his size, but when you watched him play on Saturdays you didn’t see it and I expect the same will be the case on Sundays too. If you are an Eagles fan the hope is you get the production of former similar-sized receiver Marvin Harrison – and if you do, then what a pick this is…

Smith’s move to the pro’s should be helped by having his former QB Jalen Hurts throwing him the ball; Eagles fans will hope this is a mutually beneficial partnership, with Hurts looking to cement his place as a starter in the league. The Eagles needed offensive talent ,and I believe they got the best WR in the draft.

The Eagles had two picks on day 2, and the first one was seen by many as a bit of a gamble. In ‘Bama center Landon Dickerson, the Eagles know in terms of talent they were getting a first round guy. The big issue is can he stay healthy? Dickerson has had two ACL tears and major ankle injury during his college career, both in Tuscaloosa and also Tallahassee with Florida State. This was seen as a major red flag by many, but the Eagles must have been happy with the medical and took him. If he can stay healthy this improves the Eagles o-line dramatically, and again gives Hurts more chance to cement his starting position given the improvement their new lineman will bring.

In the 3rd round the Eagles took Milton Williams, a defensive tackle. This pick will probably be best remembered for the negative reaction in the draft room as there seemed to be dissention between Howie Roseman and Tom Donahue. In terms of the pick, Williams measured extremely well for his position being in the 99th percentile for a number of metrics. The question will be, does this translate to on the field play, and can he help the Eagles defend the run straight away? With this pick I believe the Eagles will be looking for a day 1 starter, and it is yet to be seen whether Williams is one of them.

In Round 4 the Eagles started to address one of their major issues of 2020, that being cornerback. In Zech McPhearson they believe they have drafted a player who will battle for starter minutes right away, and the Eagles will hope his ball skills make up for his less than elite speed.

“Elegance isn’t always an adjective you can use when describing how someone plays the game of football, but Zech McPhearson makes it seem the most natural thing in the world to bail out to a deep zone, identify the threat, flow to the catch point and make a play. Observant and intelligent, little fools him and he’s a valuable asset to his coaches on the field. He played some slot for the Red Raiders but I think a lack of aggression and play strength makes him more suited as an outside cover corner. He’s by no means got everything you wish for, but he’ll fit certain schemes very well. He left Penn State looking for more game time, and something clicked for him as a senior that suggests upside as a day three pick.”

In the 5th round the Eagles picked up Memphis RB Kenny Gainwell; we will discuss him more later on, but this could be a perfect fit for the Eagles. In the 6th Round Philly had 3 picks and went defense with all of them. In Marlon Tuipulotu, Tarron Jackson and JaCoby Stevens, the Eagles hope to have acquired players who will assist in sub packages in year 1 and progress to more prominent roles going forward. Of the three I expect Tuipuloto to have the biggest immediate impact, certainly as an early down run stuffer.

One To Watch: Kenneth Gainwell

Given the expected offensive scheme and a pretty raw QB it is not surprising that the one to watch is a RB who can catch out of the backfield. Gainwell opted out of 2020 but in 2019 he was spectacular for the Memphis Tigers, gaining over 2000 yards from scrimmage and scoring 16 TD’s. The return of Jordan Howard and addition of Kerryon Johnson makes it a crowded position group behind entrenched starter Miles Sanders, but Gainwell brings a level of explosiveness that should make him stand out from the pack. 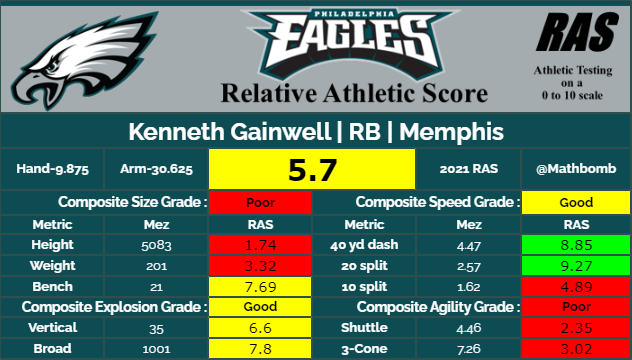 New head coach Nick Sirianni will be hoping that Gainwell commands his share of third down snaps with an impressive training camp and as he familiarises himself with the playbook his skill and versatility will get him on the field more and more. Eagles fans will be praying Gainwell emulates his fellow Tigers alumni and becomes the 3rd successful RB out of Memphis in recent years (Tony Pollard and Antonio Gibson) – and given the opportunity he could find himself, this is very much a realistic opportunity.

The Eagles picked up 7 UDFA’s to bolster the roster and battle in camp. Three interesting names are all on offense: Jamie Newman will be seen as a developmental QB who has a chance to make the roster as a third stringer behind Hurts and Flacco. Whilst at wideout the Eagles picked up Trevon Grimes and Jhamon Ausbon; both are X receivers who will look to challenge the already existing – and embattled – WR’s in Philly. Whilst neither of them may ultimately make the roster I think taking fliers on more receiving talent tells the fans that, despite the arrival of DeVonta Smith, Philly are still on the lookout for more weapons. Stoll, Crider, Bailey and Awosika will  all face tough challenges to make the roster, but being given the opportunity is a start.

People will have concerns around The Eagles’ first two picks but I love both of them, and if they hit this draft will be seen as a massive win. Given my thoughts on Gainwell I really like how the Eagles have looked to address their offensive issues in 2020 and try and surround Hurts with talent that will allow him to succeed. The players picked on defense aren’t as spectacular, but if they add depth and versatility this season then the notoriously difficult to please Eagles fanbase should be delighted with that the front office has achieved over draft weekend.

END_OF_DOCUMENT_TOKEN_TO_BE_REPLACED
Get 20% off PFF ELITE and prepare to win in 2019!