The NFL Draft is over, and we cannot head into the three-month abyss that is the offseason without looking at what all 259 selections mean for each franchise. Whilst too early to judge just how successful a draft class each team’s was, we can look at how rookies fit within schemes, where they stand on depth charts, and who we can expect to make an impact in 2021. We continue our team by team series with the Houston Texans:

The Houston Texans, thanks in large part to the incompetence of Bill O’Brien and the McNair family’s willingness to give him evermore power until his firing in October last year, didn’t have a selection in the first round of this year’s NFL Draft. Indeed, they would hear their name called for the first time in round three, meaning Texans fans had to make sure their fridges and snack helmets were fully stocked to see them through.

So why the dearth of draft picks? Well, it’s hard to find a good place to begin. Basically, BOB had an intriguing if not deranged roster building strategy of trading away star players for peanuts whilst simultaneously spending a king’s ransom on expensive acquisitions. The key examples would be sending DeAndre Hopkins to Arizona for not much more than a second round pick, whilst bringing in the admittedly talented Laremy Tunsil for multiple first round picks – a trade that will still be having ramifications for benefitting teams in the 2022 draft.

Unsurprisingly, it wasn’t a vision destined for long-term success. O’Brien was booted and a new GM-HC team in Nick Caserio and David Culley brought in to pick up the pieces. And if they thought the state of the roster and the draft capital to fix it was bad, things were about to take an even worse turn…

When high-flying front office executives are considering general manager job offers, something they often look for is a franchise quarterback in place – the idea being they are rarer than rocking horse sh*t and having one makes your life a lot easier. How much Nick Caserio knew when taking the Texans top job only he knows, but Deshaun Watson’s demands for a trade followed by a serious legal situation following the allegations of sexual misconduct by twenty-two different women meant that, if QB hadn’t been an area of focus upon his hiring, it certainly was by the NFL Draft.

Almost backed into a corner, the Texans selected Davis Mills with the 67th overall pick – their first selection of draft weekend. Mills was the third QB to come off the board in four picks as teams attacked the second wave of signal callers on day two. The hipsters favourite quarterback outside of the top five big names, Mills comes with some upside; notably flashes of high football IQ and a big arm. The problem is he’s only started 11 games at college thanks to a litany of injuries and a shortened PAC-12 COVID season. Whether or not he’s NFL ready by week 1 remains to be seen, but I wouldn’t be surprised if we see Tyrod Taylor be named QB1 with Mills waiting in the wings for his shot.

Twenty-two picks later the Texans were back on the clock after trading up twenty places to take Nico Collins. The former Michigan man is a big-bodied receiver who isn’t going to blow you away with the ball in his hands, but is extremely difficult to control at the catch point and can be unplayable on his day. There’s the feeling we’re yet to see the best of Collins, and as a possession receiver it’s possible Nick Caserio had his rookie quarterback in mind with this selection.

Houston had only three picks left to their name come day three, so quality over quantity was the key. And in Brevin Jordan they seemed to have gotten impressive value so late in the draft. Jordan isn’t your stereotypical NFL-shaped Tight End; with more of a running back’s frame the Miami product was extremely reliable for the Hurricanes over the course of his college career. He had impressive yards after contact and was something of a playmaker with the ball in his hands. His selection showed a dedication from this new front office to give whoever is under center more weapons in 2021, and whilst Jordan will have been hoping to come off the board earlier it’s a great landing spot to see significant game time from day one.

Finally addressing the defensive side of the ball with pick 170, The Texans bolstered their linebacker corps with the addition of Garrett Wallow from TCU. Now, full disclaimer here; I’m an absolute Wallow fanboy. He is an absolute pest of a linebacker, in and around everything and never stops moving. His ability in pass coverage stems from his time playing safety at high school, and it will be interesting to see if new defensive co-ordinator Lovie Smith uses him as a conventional Will ‘backer, or has updated his traditional Tampa-2 defense to move with the times and have Wallow operate more of a hybrid role:

“Garrett Wallow used to be a safety at high school and he brings that agility and comfort in space with him to a linebacker role. He’s played across the formation for TCU and offers real versatility where he can line up. His best attributes are pass coverage and ability to scrape to the football and tackle forcefully. I think he’s a sleeper with a high floor and high ceiling. Not quite the finished article but he can start for a team as a 4-3 Sam with potential to become a Will with experience or even a Mike if he adds more muscle mass. If he falls to day three he’s a steal.”

Houston had used some of their late round draft capital adding small pieces to their team in free agency, so Roy Lopez was the final selection in round six. The former Arizona Wildcat spent just one season in Tucson after transferring from New Mexico State where he put up some impressive numbers. A big dude, his 318lbs suggests he will add more depth to the nose tackle position behind starter Ross Blacklock, recent addition Jaleel Johnson and last year’s free agent rookie Auzoyah Alufohai.

One To Watch: Brevin Jordan

As mentioned, out of all of The Texans selections over draft weekend, it feels like Brevin Jordan has the opportunity to make the biggest impact in 2021. A position group that – let’s be generous here – is a mixed bag of Jordan Akins, Pharoah Brown and Kahale Warring, along with Ryan Izzo who Nick Caserio traded for from his former employers. None of those guys stands out as a lock for first team duties, and one look at Jordan’s production at Miami suggests he has the game to command his fair share of snaps…

During his time with the Hurricanes, Jordan posted 1,358 yards, 105 catches and 13 touchdowns in thirty games. In his final season in Miami he averaged 9.8 yards after the catch, and recorded a whopping 365 yards with the ball in his hand – the most out of any FBS tight end in 2020. That coveted ability to gain hidden yards helps move chains, something that will be critical for the Texans considering the uncertainty at quarterback. 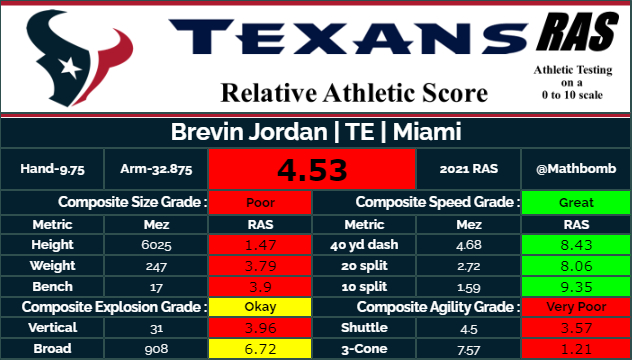 Watching him at Miami, Brevin Jordan was utilised in a number of roles including as a traditional inline tight end and also as a pseudo slot receiver where he was able to attack the seams. His straight line speed is sneaky and an array of double moves and well-timed breaks seem to bring him comfortable separation. Whilst his size is far from ideal as a pass catcher, his lower centre of gravity aids him with the ball in his hand, and could also find him time as a makeshift fullback, something he has a little experience of during his college career.

Considering the Texans have a roster that is far from challenging for the playoffs, I expected Nick Caserio to be rather busy after the draft scooping up some talent that fell through the cracks. Instead, the new general manager made just four moves, again looking to strengthen the offense. Marlon Williams is an intriguing addition; the former UCF Knight saw his production explode in his final season in Orlando, and projects to be the kind of ‘big slot’ receiver in today’s NFL. Reminiscent of Devin Duvernay from last year’s draft, he might be a candidate to be given the ball in space and has a shot at being a long-term replacement for Randall Cobb, a receiver with a similar skillset.

The other receiver added, Damon Hazelton, had a nomadic college career and struggled for consistency as a result. He flashed some big play ability but little in the way of athletic prowess and I would argue he has a tougher task to make the roster, despite it being a comparatively weaker group to most teams in the NFL. Meanwhile, it seems Caserio stayed in-state to recruit two Texas A&M Aggies to bolster their offensive line,with both Ryan McCollum and Carson Green having a fair opportunity to crack the final 53 considering the competition ahead of them.

Considering the lack of draft picks and the poor hand that Nick Caserio was dealt heading into this year’s annual selection meeting, I’m not sure many Texans fans would complain about the small haul of talent he was able to bring into the organisation over the course of draft weekend. Most new General Managers will live and die by the selection of their first quarterback, but considering the round Davis Mills was taken and the situation Houston found themselves in, most would appreciate that it was a shot worth taking.

The subsequent selections undoubtedly helped this franchise, particularly on offense. Nico Collins and Brevin Jordan both have routes to game time for an instant return on their investment, and considering they were late day two or day three picks, you can’t really ask for more than that. The Texans find themselves in a division with two legitimate playoff contenders, and anybody expecting an immediate turnaround will be undoubtedly disappointed. This was a draft with one eye on the future, a long-term project; and whilst there are many questions still unresolved, Houston, despite the odds, got better.

END_OF_DOCUMENT_TOKEN_TO_BE_REPLACED
Get 20% off PFF ELITE and prepare to win in 2019!