The NFL Draft is over, and we cannot head into the three-month abyss that is the offseason without looking at what all 259 selections mean for each franchise. Whilst too early to judge just how successful a draft class each team’s was, we can look at how rookies fit within schemes, where they stand on depth charts, and who we can expect to make an impact in 2021. We continue our team by team series with the New Orleans Saints:

Having successfully maneuvered their way through cap hell for another season, the New Orleans Saints had a handful of holes to fill, and only a few picks to fill them with. One of the more prominent positions of need was at defensive end, having lost 13.5 sacks from Trey Hendrickson. With pick 28, the Saints selected Payton Turner, from Houston.

It’s worth saying now that Payton Turner is absolutely not Trey Hendrickson. It’s highly unlikely he’s going to come in and put up double-digit sacks in year one. What he is, however, is big, powerful, and aggressive. If all goes to plan, he’s the sort of player who is going to harass linemen (when he gets on the field), and really squeeze the pocket. On rushing downs, he’ll be capable of closing lanes before they open. That is a big “if”, however. Payton Turner is a bit of a project, and the Saints have struggled to get the most from “projects” in recent years (hello Marcus Davenport). He’s a bit of a risk, is Turner. But the rewards, should they pull it off, are as valuable as they come.

Heading into day two, New Orleans had three picks, thanks to the Atlanta Falcons hiring Terry Fontenot from the Saints as their new General Manager. They opted to package their two thirds (98 and 105) together, and made a trade with Denver, moving up to the 76th overall pick. With picks number 60 and 76, the Saints selected Pete Werner and Paulson Adebo, the linebacker and cornerback from Ohio State and Stanford respectively.

In Pete Werner, the Saints are getting a powerful outside linebacker, likely brought in to bolster their run defense. Our man Simon Carroll described him as having a “downhill thumper-style of aggression”, which suggests he’s capable of laying down the hammer on on-coming ball carriers. His limitations are obvious, however. His coverage skills leave plenty to be desired, which ultimately affects his dynamism. With that, you get the impression the Saints have drafted him to be a situational player, based purely on need. I don’t think it’s unfair to question whether that sort of selection was worthy of a second-round pick.

They did, as we’ve established, move up for Paulson Adebo. Adebo is a rangy corner, capable of creating turnovers. The Saints needed a long-term plan at cornerback, and Adebo is clearly a step into enacting that plan. 6 foot 1, 190lbs, Adebo is the ideal build to become a dominating cornerback for the New Orleans Saints. The problem? He’s extremely raw. His highlights are so fun to watch, but his lowlights are really, really bad. He needs time to really grow into himself, and work on his angles. In the third round, however, you’d argue that it’s worth taking a swing on a player with considerable upside.

The Saints made three selections on the final day of the draft. Notre Dame’s quarterback, Ian Book in round 4, Kentucky’s offensive tackle, Landon Young, in round 6 and South Alabama’s wide receiver, Kawaan Baker, in round 7. The big story in New Orleans prior to the draft, aside from their financial situation, was what they’d do at the quarterback position. Of course, they retained Jameis Winston, and managed to work Taysom Hill’s contract to a comical degree. What they don’t have is a long term solution at the position, and they’ll be hoping that Ian Book can provide just that. Notre Dame’s signal-caller is both accurate and sturdy, but his arm strength may be a cause for concern. Given the play from their most recent starter, however, that might well be something they can overcome. More likely a development option than a legitimate competitor for the starting gig in season 1.

“There’s something magnetic about Ian Book’s reckless style of play that you just cannot help but love. He’s like a gunslinger without the live arm who brings many of the intangibles you look for in an NFL quarterback but little in the way of traits. His accuracy is wayward, arm strength not quite to the level you want, and his decision making with the football under duress questionable to say the least, and with that in mind it’s highly unlikely he’ll ever be a starter at the next level. But he’s an absolute gamer who won’t back down from anything, and had a knack for just getting the job done at Notre Dame, particularly in his final season as they made the college football playoffs. He’s not conventional backup material in that he’s as far removed from a ‘safe pair of hands’ as you could imagine, yet he’s probably more likely to win you a game than the likes of a Mike Glennon. I truly hope he makes a roster and we see him step into the breach and bring his unique brand of entertainment to the NFL - just hopefully not for my team!"

In recent years, the New Orleans Saints have done an excellent job of drafting across the offensive line. Landon Young is the latest name to join that list, though he’s one who may need a bit of time to settle. Young was an excellent prospect coming out of high school, though his college career stuttered a bit. The Saints will be hoping they can coax some of that five-star potential out of him. He’s incredibly unlikely to unseat Terron Armstead or Ryan Ramczyk in 2021. With steady development, however, he might be a useful option to call on, as they continue to wade through the deep waters of cap hell.

One To Watch: Paulson Adebo

Of all the names the Saints picked up in 2021, Adebo feels like the one most likely to make an impact. The Saints passing defense was far from awful in 2020 (5th fewest yards conceded), but they could always stand to bolster. As previously mentioned, Adebo does need to grow into himself. If he does, and if he manages to tidy up some of his play, there’s every chance he’ll make a name for himself in New Orleans. 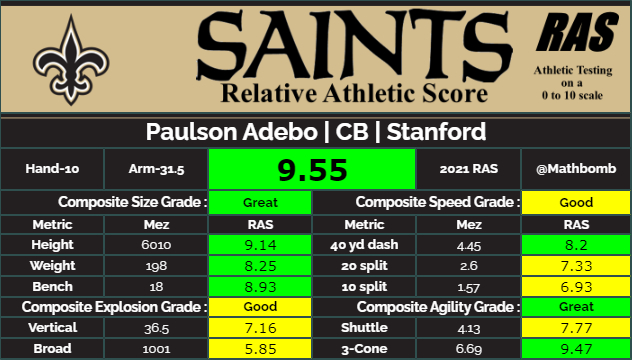 The key to all this is the future of Marshon Lattimore, who is at the end of his rookie contract with the Saints. Given the Saints’ ongoing cap issues, jettisoning Lattimore may well be seen as the ideal scenario for a side strapped for cash in 2022 and beyond. Expect Adebo to be given every opportunity to stake a claim at a starting role in the Saints secondary with that in mind.

The Saints used the UDFA market to add a further eleven names, though Syracuse safety, Trill Williams, was waived only a few weeks after the fact. Of the remaining names from the initial group, Iowa State tight end, Dylan Soehner, feels like the most likely to stick around. He’s most likely to see snaps as a blocking tight end, though his receiving acumen shouldn’t be dismissed. The Saints have a storied history of success at the tight end position (Jimmy Graham, Jared Cook, and Taysom Hill to name but three), and Soehner might well be able to carve a position for himself in a less than vintage room.

This year’s Saints draft class is a weird one to evaluate immediately. It’s difficult to imagine many, if any, of these players becoming key contributors in 2021. It feels, to me, like Mickey Loomis and company opted to take swings on the highest “ceiling” players available, floor be damned, with the plan to develop them into starters in 2022 and beyond. That’s, obviously, a high-risk plan to enact. With Sean Payton at the helm, however, you wouldn’t bet against them seeing it through. In 4 years time, don’t be surprised if we’re openly questioning how some of these players fell as far as they did.

END_OF_DOCUMENT_TOKEN_TO_BE_REPLACED
Get 20% off PFF ELITE and prepare to win in 2019!