The NFL Draft is over, and we cannot head into the three-month abyss that is the offseason without looking at what all 259 selections mean for each franchise. Whilst too early to judge just how successful a draft class each team’s was, we can look at how rookies fit within schemes, where they stand on depth charts, and who we can expect to make an impact in 2021. We continue our team by team series with the New York Jets:

The New York Jets came into the 2021 NFL Draft with needs everywhere. A miserable two-win campaign in 2020 left the Jets with the second overall pick. With a new regime in charge, the Jets were likely to move on from former saviour Sam Darnold. They shipped the USC product to Carolina and targeted a quarterback in this year’s draft. With Trevor Lawrence selected first, the Jets still had a plethora of options. In the end, New York decided on Zach Wilson from BYU. The debate raged in the pre-draft process about QB2, but Joe Douglas had his guy all along. The Jets plumped for Wilson to be the new saviour of the beleaguered franchise.

Wilson is a highlight-reel quarterback. He possesses a powerful throwing arm, and he can throw from different angles. Wilson is a playmaker; he can excel out of structure. Add that to his penchant for using his legs, and it easy to see why the ‘Mormon Manizel’ moniker caught on in Utah. Wilson is a fascinating talent. The ceiling is tantalizingly high; the floor is dangerously low. Wilson needs refining; the gun-slinger talent must get managed.

The Jets held another pick in round one. They were due to select again at pick 23; instead, they traded up to draft offensive lineman Alijah Vera-Tucker. The Jets know they must build an elite line to protect Wilson; Vera-Tucker is another piece of this developing jigsaw. Vera-Tucker is a smart protector, he uses his hands to stick defensive tackles, and his footwork is solid for a man his size. Adding another offensive lineman to work with Mekhi Becton is an intelligent decision. The Jets drafted their franchise quarterback; then they traded up to get him another protector. Overall, on day one, the Jets made wise decisions to rebuild the franchise.

On day two, Roger Goodell called the Jets’ name just once. The Jets didn’t waste that pick either as they got more help for their new quarterback, selecting Ole Miss wideout Elijah Moore. The Ole Miss product may be a tad undersized; however, he makes up for it with solid hands, reasonable body control and versatility. Although he did lineup all over the field in a Rebels uniform, Moore looks like a classic slot receiver. Moore will compete for a starting spot during the offseason programme. His lack of size will always concern teams and evaluators; conversely, Moore may make up for that as he is ferociously competitive.

After drafting a quarterback, then an offensive lineman, it made sense that the Jets would draft a skill position player. Moore ticked that box, and he should slot in nicely in Mike La Fleur’s offense. That offense clicks with a solid run game that then uses positional mismatches for the pass-catchers. Moore’s experience of playing in different alignments should help him adapt as quick as possible.

After a quiet day two, the Jets were incredibly busy on day three, starting drafting UNC running back Michael Carter. The UNC alum is an excellent fit for this offense, demonstrating the ability to bend and turn the corner with speed; In this outside-zone running scheme, offensive coordinators covet that type of skill. Carter’s vision is another excellent trait that will mesh well with Mike La Fleur, though his slight build and lack of power may limit his ability to develop into a bell-cow back. Ultimately, it is a wise pick; Carter could shine in 2021.

“Javonte Williams may be drawing all the attention for the North Carolina backfield in the pre-draft process, but don’t sleep on Michael Carter, who actually had more rushing and receiving yards in his Tar Heel career, and a better YPC in his final year too, rolling for 1245 yards from 156 carries at 8 yards a tote. The first thing you notice is that Carter will never be a three-down back in the NFL - his size simply precludes that from happening, despite his efforts and physicality. That limits his draft stock, but having him as a complementary piece of a running game would not only maximise his skillset and ability in the passing game but also elongate his career too. As far as the skillset he provides for the role he is likely to have at the next level, there is very little to dislike.”

The official Jets website lists Jamien Sherwood as a linebacker. Several draftniks viewed him as a safety in the pre-draft process. Whatever position Sherwood transitions into, the Auburn product is an intriguing pick. He is a strong tackler who plays well in the tackle box. Sherwood is a player with high energy; he can roam from sideline to sideline. His lack of top speed and propensity to take bad angles are the negatives in his game. Sherwood’s strength at shedding blocks and physical nature could make him a linebacker in the long term. How Robert Saleh chooses to deploy him is a fascinating offseason storyline.

The Jets then decided to confuse everyone and draft another player called Michael Carter. The Duke defensive back is a player who could line up at safety or cornerback in the defensive backfield. Carter is an aggressive, hungry defender with a good understanding of pass coverage assignments. He is also a heavy-hitting tackler in the run game. Carter is probably too small to play on the outside as a corner; plus, he tends to turn his back. As it stands, Carter looks like a Safety, although Robert Saleh may use him in sub-packages in a specialized role. Following Carter, the Jets got more help for the secondary with Pittsburgh cornerback Jason Pinnock. He is a corner with decent speed, can compete with quick wideouts, and his movement is fluid. The genuine concern with Pinnock is his play recognition ability.

The Jets rounded out their draft by selecting Hamsah Nasirildeen and Brandin Echols. Nasirildeen is a versatile defender with physical tools galore. The former Florida State Seminole could carve out a role as a swiss-army knife defender in sub formations. He hits hard, competes and diagnoses plays to a reasonable level. Brandin Echols is a small, speedy corner who holds good eye discipline and plays to the ball. Echols is too limited to become a genuine outside cornerback, but he may develop into a good slot corner and contribute to special teams.

Hamsah Nasirildeen is a fascinating prospect. To use baseball parlance, he owns all the tools necessary to be successful in the NFL. Nasirildeen is a rare blend of speed, power and raw athleticism. He excels when lined up in the box; Nasirildeen owns good awareness in the run game and attacks downhill with solid knowledge of gap assignments. 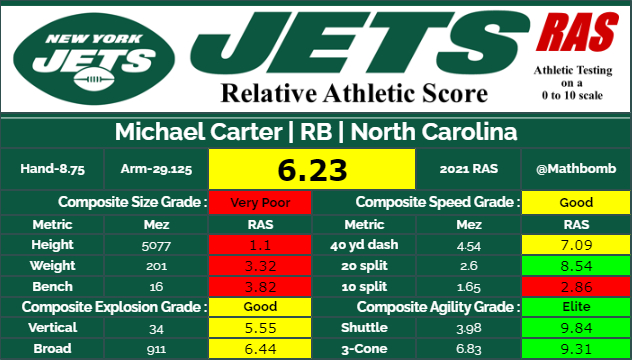 The Flordia State alum is one of the new-style hybrid safety’s that can do a little bit of everything. Nasirildeen owns a good foundation in pass defense, particularly in zone coverage. He can man the underneath zones on the hash marks competently. Couple that with the size to match tight ends in pass defense, and Nasirildeen could be an excellent addition to the Jets defense. Some members of the draft cognoscenti compared him to Kam Chancellor in the pre-draft buildup. Nasirildeen is a Bishop, a Rook and a Knight in one shiny chess piece.

There are inconsistencies, and the injury history is a concern. Overall, this versatile defender owns a healthy array of physical and mental skills as he jumps up into the NFL. The Jets could line him up all over the field to create dysfunction for the offense. He could line up as a disguised linebacker for run defense and then bail out to drop into coverage.

New York might use him as a ‘free’ defender in sub formations, especially if there is an extra defensive back on the field. He could fly downhill as a blitzer, man a curl zone if the Jets play zone defense or match up with a tight end in man coverage. Robert Saleh is an excellent defensive mind; he could work wonders with Nasirildeen.

The Jets added players in most areas of the field. They signed players on the offensive line, secondary, and the defensive front seven. Hamilcar Rashed JR is an undersized edge player, but his high energy and intensity is something to watch this offseason. Kenny Yeboah is a decent pass-catching tight end who could make the roster with a good offseason. The Jets are in the midst of a significant rebuild; it is prudent to sign so many undrafted free agents. They will evaluate the talent and give themselves more options at finding talent that can make the roster.

The Jets reshaped the roster during the NFL draft. It is the start of a new era, and the draft signalled it – choosing their new franchise quarterback before doubling down by getting him help. After focusing on the offensive side, the Jets got their defensive-minded head coach some tools to re-design the defense. New York prioritized raw, athletic players that can get moulded into elite players. There is certainly some risk attached to the draft class, New York hitched itself to Zach Wilson. The former BYU man needs time, coaching and a fair chance to succeed in New York. The Jets draft class will live and die if the quarterback succeeds or fails.

END_OF_DOCUMENT_TOKEN_TO_BE_REPLACED
Get 20% off PFF ELITE and prepare to win in 2019!