The NFL Draft is over, and we cannot head into the three-month abyss that is the offseason without looking at what all 259 selections mean for each franchise. Whilst too early to judge just how successful a draft class each team’s was, we can look at how rookies fit within schemes, where they stand on depth charts, and who we can expect to make an impact in 2021. We continue our team by team series with the Cleveland Browns:

Fortunes are changing in Cleveland. Following a first playoff berth in 18 years and a January triumph over the old enemy and ever present Pittsburgh Steelers, the Dawg Pound had plenty of optimism heading into the offseason and that has only grown in the past two months.

After acquiring a number of high profile defensive starters in free agency including John Johnson and Jadeveon Clowney, GM Andrew Berry set about bolstering that side of the ball in the draft. For Browns fans who have dreaded the draft weekend for decades, the 2021 showpiece held in Cleveland marked another huge step in the right direction.

The Browns successful weekend started with the selection of hugely talented cornerback Gregory Newsome II with the 26th overall pick. Newsome has the build, technique, and instincts to step in immediately and demand significant playtime on the perimeter, regardless of veteran Greedy Williams’ health.

The Northwestern standout has been successful in Cover-3 zone and press schemes and his ability to hold his own in various schemes speaks to his versatility and overall talent level. Cleveland found a great player on day one, who can provide stability for their pass defense alongside former first-round pick Denzel Ward. His feet are easily the best in what shapes up as an impressive defensive back class.

After benefiting from Newsome’s slide in round one, GM Berry was not prepared to wait in the second, moving up seven spots to snag versatile Notre Dame linebacker Jeremiah Owusu-Koramoah. Analysts lauded the selection as one of the best value picks of the entire draft, with the Fighting Irish star worthy to many of being a mid-first-rounder. It is easy to see why; Owusu-Koramoah thrust himself into the national spotlight recording 62 tackles, 11 for loss and three forced fumbles in 2020, all with a disrupted summer due to the pandemic.

Aside from the numbers he has the ability to line up just about anywhere on defense and projects as the ultimate hybrid talent, who could potentially play safety or even line up in the slot. With the ability to excel in coverage and the pass rush, Owusu-Koramoah gives the Browns’ defense so much versatility and he should make an impact from day one.

The pandemonium in Cleveland continued when Berry added former US track star, speedster Anthony Schwartz in the third round. Schwartz was the fastest player in the 2020 draft and uses his speed and quick cuts to create conflict for cover defenders and destroy pursuit angles for tacklers. Schwartz needs to grow into more of a well-rounded, reliable receiver, but he has the rare natural speed and burst that could cause havoc for NFL defenses. If the Auburn wideout can refine his pass-catching skills, getting him in the third round will look like another steal.

The cards continued to fall right for Berry and the front office on Saturday with the Browns landing two players with high ceilings on the defensive side of the ball in the fourth and fifth round. DT Tommy Toigai has tremendous upside despite not seeing the field much at Ohio State. He has a strong athletic profile with good explosion and really impressive agility and is extremely strong in the weight room. If Toigai makes the right adjustments he projects to be a really nice player down the road for the Browns, adding to their defensive line depth.

“An accomplished run defender, Togiai was a force to be reckoned with in Columbus. Ohio State’s struggles in the National Championship Game showed their reliance on the disruptive linemen, and it should be a similar story for a team in the NFL. Questions about his measurables and lack of production as a pass rusher will likely force him to only be courted by scouts looking for an A or B gapper in a 4-3 scheme, but he’s the kind of guy to have a low-key, consistently effective 10 year pro career.”

Fifth round pick, former Georgia Bulldog Richard LeCounte looks like another smart addition to what is now the league’s deepest secondary outside of Colorado. An excellent communicator on the back end, with a high football IQ, LeCounte will contribute from day one on special teams and has a high enough ceiling to one day make the transition to starting safety. Other intriguing picks included Demetric Felton (more later) and fourth round offensive tackle James Hudson, who will help bolster the depth in the trenches.

One To Watch: Demetric Felton

Versatility is something that featured throughout Cleveland’s 2021 draft class and perhaps nobody epitomises that more than sixth round pick UCLA Bruin RB Demetric Felton. Felton was used as a wide receiver and running back during his four seasons with the Bruins. This past season, he started five of six games and amassed 668 rushing yards and five touchdowns to go along with 22 catches for 159 yards and three more scores. 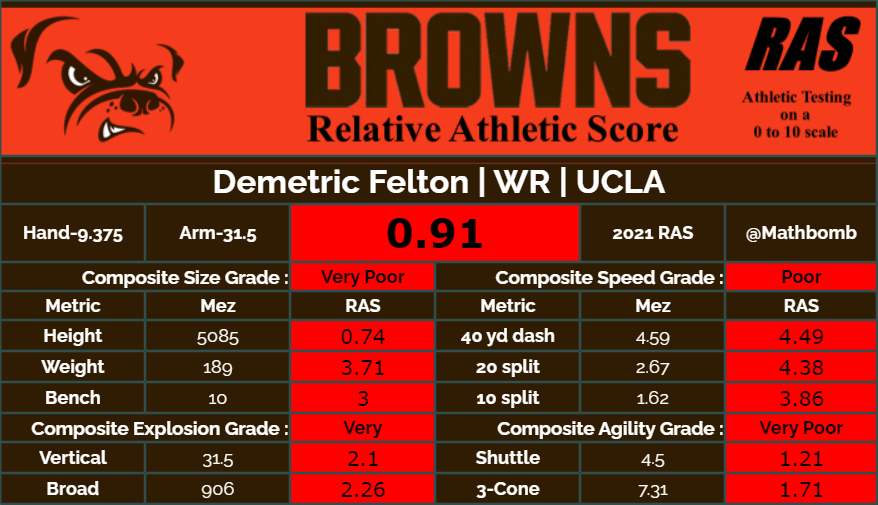 Head coach Kevin Stefanski revealed after the draft that Felton will begin his professional career as a running back but is poised to make an impact all across the offense. Whether Felton contributes or not, snagging him in the sixth round screams low risk, high reward.

In a somewhat NFL offseason rarity the Browns only added six undrafted free agents to their roster following their impressive draft haul. Of the players that were added, Florida State DT Marvin Wilson could prove a nice addition to the pass rush rotation if he regains some of the form of his early college seasons. Charlotte running back Tre Harbison III is also an intriguing project; Harbison put together successive seasons of 1,000 yards at Northern Illinois before transferring to Charlotte for 2020.

After years of having a front office not on the same page as the coaching staff and dealing with a perpetual power struggle, Cleveland finally has a plan and is moving in the right direction. Nothing symbolised that more than the draft. For parts of the weekend it felt like it was Andrew Berry’s world and everyone else was living in it.

A defense that held this roster back last year has been transformed this offseason into one of the stronger groups in the league on paper, and the draft helped cement that. The Browns added five players on that side of the ball – Newsome, Owusu-Koramoah, Togiai, Fields and safety LeCounte – all without sacrificing any players or future key draft capital in the process.

In Newsome and Owusu-Koramoah they have players who were in the top 20 of many draft boards, and both are expected have an immediate impact on the field – and with the Browns only one score away from the AFC title game last year the Dawg Pound are starting to believe that this could be their season.

FORMERLY THE EDITOR OF THE SPORTS GAZETTE, ALEX IS AN EXPERIENCED SPORTS JOURNALIST CURRENTLY SPECIALISING IN FEATURE WRITING. A LIFELONG EAGLES FAN, HE PLAYED THE GAME FOR THREE YEARS AS AN OUTSIDE LINEBACKER FOR THE LEICESTER LONGHORNS AND IS DESPERATE TO SEE THE DELAWARE WING-T OFFENSE TO RETURN TO COLLEGE FOOTBALL.

END_OF_DOCUMENT_TOKEN_TO_BE_REPLACED
Get 20% off PFF ELITE and prepare to win in 2019!