The NFL Draft is over, and we cannot head into the three-month abyss that is the offseason without looking at what all 259 selections mean for each franchise. Whilst too early to judge just how successful a draft class each team’s was, we can look at how rookies fit within schemes, where they stand on depth charts, and who we can expect to make an impact in 2021. We continue our team by team series with the Denver Broncos:

Many football fans in and outside of Denver assumed the Broncos would be in play for a quarterback this offseason. Drew Lock’s somewhat inconsistent performances under center brought back painful memories of John Elway’s track record when it comes to acquiring talent at the most important position in professional sports. Since Peyton Manning rode off into the sunset with his second ring, the list of quarterbacks to wear the famous Denver orange reads Brock Osweiler, Trevor Siemian, Paxton Lynch, Case Keenum, Joe Flacco, and Lock himself.

With new GM George Paton assuming control of the roster, perhaps he has seen enough of Lock to give him the keys to the offense for another season – bringing in Teddy Bridgewater is, at best, someone they can turn to if their starter does indeed become the final flop on Elway’s list. Essentially, Paton and the Broncos opted out of getting involved in the game of QB musical chairs that the draft threw up. And despite Justin Fields still being on the board, they decided to go in a different direction, selecting Alabama cornerback Patrick Surtain with the 9th overall pick.

Surtain was often referred to as ‘the safest pick in the draft’ by many scouts, which somehow became a negative, as if they were perhaps taking a high floor, low ceiling prospect rather than shooting for the stars. I’m here to tell you that Patrick Surtain is an extremely talented footballer who was clearly the most complete corner in this draft class; he absolutely dominated at every facet of the position in his college career, and I would argue he’s already capable of playing on an island and neutralising an offense’s greatest receiving threat. In what is now a stacked secondary, he figures to start on the outside opposite Kyle Fuller, with Ronald Darby picking up nickel duties.

Moving up five spots to snag Javonte Williams one spot ahead of a potential landing spot in Miami was amongst the more surprising moves early on day two. Not that Williams is in any way undeserving of that draft spot; he’s a fantastic running back who rightly won a lot of admiration from the NFL Draft community for his aggressive style of play. The position wasn’t deemed a particular area of need for Denver, despite the loss of Philip Lindsay in free agency. But Paton must have felt differently, perhaps suggesting that a strong run game will take the pressure off Drew Lock…

Williams will command his fair share of snaps in this offense. Melvin Gordon can still tote the rock at a good yards per carry, but his ability to stay on the field suggests The Broncos’ determination to put him in a backfield committee makes sense. Williams’ ability to maintain balance through contact is phenomenal – the former Tar Heel just bounces off would be tacklers and racks up yardage he simply has no right getting. It won’t be long before he is considered the lead back in this offense.

Not content with taking just one media darling on day two, the Broncos added two more names in round three. Interior offensive lineman Quinn Meinerz may be more famous to casual fans for his affinity to let his ‘belly breathe’, but his performances at the Senior Bowl will have Pat Shurmur hoping he can be a real asset to this offense. His positional versatility will be valued, but with Lloyd Cushenberry the current starter at center there is very much a route to gametime early on if he impresses. Baron Browning will be discussed in depth later, but acquiring such a rated talent at a position of need late on day two can be seen as a big win for this franchise.

I think it’s fair to assume that the new regime in Denver considered the secondary as a weakness when they arrived this offseason. Despite tying Justin Simmonds down to a long-term deal, picking up Ronald Darby and Kyle Fuller in free agency AND drafting Surtain in the first round, they proceeded add another trio of names on day three to their back end.

Caden Sterns and Jamar Johnson come in at safety. Sterns was highly touted when he first arrived at Texas but didn’t quite hit the heights expected in his Longhorn career, whereas Johnson was less well celebrated but shot to fame when he picked off Justin Fields twice in Indiana’s game with Ohio State this past year. Both played mixed roles in their college careers and will challenge for backup duties behind entrenched starters Justin Simmonds and Kareem Jackson. Meanwhile, Kary Vincent falling to the seventh round was a surprise – the supremely athletic and aggressive corner looks ideal to add depth at the nickel corner position:

“Kary Vincent would have had Al Davis all hot under the collar. Lightning in a pair of cleats, there’s not many faster prospects in this draft class, and he can reach parts of the field that his peers cannot. That being said, football is yet to come naturally to him and there is a monumental learning curve ahead before he is ready for NFL action. He saw some time at free safety and that ultimately might be where his position will be; he’s comfortable in space and can hair towards the football at breakneck speed. He’s without doubt a project, but as the former Raiders owner once said, ‘you can’t teach speed’."

Don’t sleep on Seth Williams either folks – for my money he was the best receiver out of Auburn this year, despite the infatuation with Anthony Schwartz’s speed, who ended up heading to Cleveland three rounds earlier. Williams isn’t going to take the top off a defense anytime soon, but on jump balls he’s extremely hard to beat. As a reliable pair of hands to move the chains and a serious redzone threat, he offers something different than the current crop of Broncos receivers. With uncertainty at quarterback, a possession receiver such as Williams has the opportunity to make a name for himself.

One To Watch: Baron Browning

If i’m honest, I was less high on Baron Browning than a lot of other draft scouts heading into this year’s annual selection meeting. It seemed that his natural talent led Ohio State to move him around a little too much to the point where he never really developed instincts for one position. A true team-first, high character guy, Browning never gave less than 100% in each role, but some subtle nuances such as anticipation, timing and positioning are areas he can improve. 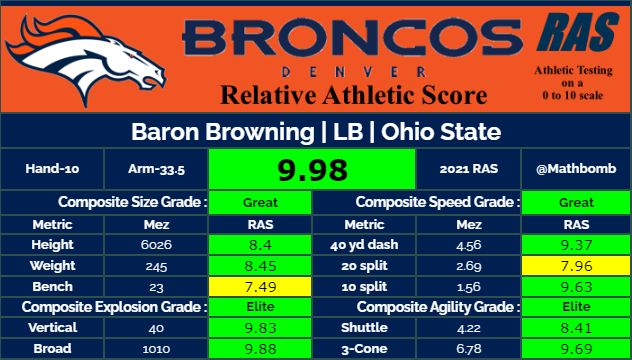 That being said, Browning is a phenomenal athlete. He brings ideal size, strength and speed to the position, with a hard hitting mentality that will endear himself to Broncos fans. Denver went into this draft looking for some competition for Josey Jewell and Alexander Johnson at inside linebacker, and they will have been delighted to find Browning still on the board at pick 105. It’s the perfect landing spot for the former Buckeye, who can spend 2021 honing his craft before becoming the long-term starter – and potential team captain – for the next decade.

The Broncos certainly weren’t shy in targeting talent still available after the draft, with ten more names added to the roster as UDFA’s. Notable positions addressed were the offensive line and pass catcher, further evidence that this new regime is giving Drew Lock every chance to prove he is a franchise quarterback this season.

Formerly a position of grave concern, the offensive line undoubtedly improved throughout the 2020 season. Yet there is still work to be done. Out of all the UDFA’s signed it would appear that Drew Himmelman from Illinois State may have the best chance to crack the final 53; the former Redbird brings rare size to the position, clocking in at a ridiculous 6’9” and 315lbs. Those measurables may have seen him drafted, yet his career at a small school and him being an older prospect (25) likely were the reasons he didn’t hear his name called. As a swing tackle he would be my bet to be the fifth man at offensive tackle on this roster come September.

How you feel about The Broncos’ draft performance is largely predicated on your opinion of Drew Lock; those who feel the third year gunslinger just doesn’t have what it takes will be mortified that they passed on Justin Fields with the number nine pick, particularly considering they didn’t have to use draft capital to position themselves for him. Much like all those teams that passed on Patrick Mahomes in 2017, Denver could be forever reminded of their decision should Lock fade out of the league and Fields become an icon over in Chicago.

But for those happy with their current quarterback, the NFL Draft could not have gone any better. New general manager George Paton did a phenomenal job of identifying areas of need, and finding corresponding prospects that would fit Vic Fangio and Pat Shurmur’s schemes. Patrick Surtain has the ability to become an All-Pro, whilst Javonte Williams, Quinn Meinerz and Baron Browning could well be fan favourites before too long. This is a draft that helps Denver get closer to challenging the Chiefs in the AFC West, and if they ultimately do need a new quarterback, then all the chips can be pushed in for the next John Elway this time next year.

END_OF_DOCUMENT_TOKEN_TO_BE_REPLACED
Get 20% off PFF ELITE and prepare to win in 2019!