The NFL Draft is over, and we cannot head into the three-month abyss that is the offseason without looking at what all 259 selections mean for each franchise. Whilst too early to judge just how successful a draft class each team’s was, we can look at how rookies fit within schemes, where they stand on depth charts, and who we can expect to make an impact in 2021. We continue our team by team series with the Baltimore Ravens:

As the dawn breaks on a new NFL season, the Baltimore Ravens once again set their sights on Super Bowl glory, as General Manager Eric DeCosta goes about building a roster capable of bringing the Lombardi Trophy back to Charm City.

Entering this year’s Draft in Cleveland, Baltimore’s main areas of need were wide receiver, edge, and offensive line. As DeCosta and the Ravens front office returned to their seats in Baltimore’s war-room, the agonising process of addressing these areas, and reconstructing next year’s team would lie ahead. With the necessary improvements, Baltimore could well be on the brink of further successes next season, as the Ravens look to become a real contender in the AFC.

With star-quarterback Lamar Jackson now approaching the final year of his rookie contract, this will be an instrumental year for the Ravens, and their signal caller.

The absence of an elite wide receiver has long been a troubling and enigmatic concern for the Baltimore Ravens. But after selecting Rashod Bateman in the first round, it seems that Baltimore finally got their man.

The Ravens’ passing offense was ranked dead last in the NFL last season, and 27th in 2019. Determined to change this, the Ravens will be delighted that Bateman fell to them at 27th overall. In two-and-a-half highly productive seasons in Minnesota, he made 147 receptions for 2395 yards and 19 touchdowns. A stronger, more physical receiver who is effective over the middle, Bateman will likely play in the slot next season, providing a reliable target for Lamar Jackson.

Bateman joins a receiving core that already has free agent signing Sammy Watkins, and Marquise Brown, Baltimore’s first round pick from 2019, who has established himself as a deep-threat, who can take the top-off of defenses.

Ravens fans will be hopeful, after years of poor production from the receiver position, that Bateman’s selection can inspire a more potent aerial attack for years to come.

With the 31st pick acquired from the Kansas City Chiefs in the Orlando Brown Trade, Eric DeCosta opted for Oweh, a highly athletic outside linebacker out of Penn State. An elite prospect, he undoubtedly brings some much-needed physicality, and an appetite for big hits to Baltimore’s defensive line. Despite the defense’s proficiency in recent seasons under coordinator Don Martindale, there has been a dearth of elite pass rushers. Last season, the Ravens struggled to get much pressure on opposing quarterbacks, with only 39 sacks.

To make matters worse, Matt Judon, who led the team in sacks in each of the last two seasons, signed with the New England Patriots this offseason, with Yannick Ngakoue also departing.

There’s no escaping the fact that Oweh didn’t register any sacks in 2020, and only had seven in his three year college career. Nonetheless, Oweh is extremely effective against the run, and there is a strong belief that he can become a stalwart on Baltimore’s defensive line. Perhaps a more risky pick, Oweh was favoured over pass rushers with much higher production in college, but there is no doubting his immense potential.

Having passed-up on the opportunity to draft an offensive lineman earlier in the draft, Baltimore selected the former Georgia guard in the third round. Having already made headlines for his love of hunting squirrels, the Georgian giant – at 6’6″, 343 lbs – will be tasked with protecting former league MVP Lamar Jackson. His arrival could see Bradley Bozeman, who played at left guard last season, move to center next year.

The Ravens next selected defensive back Brandon Stephens out of Southern Methodist University. According to DeCosta, Stephens will likely switch from corner to safety, in order to provide greater depth at the position behind Deshon Elliot and Chuck Clark.

DeCosta doubled down, as the Ravens selected another wide receiver in Tylan Wallace in the fourth round. A reliable pass-catcher who hardly dropped a pass at Oklahoma State, Wallace was touted as having second round potential, although a chequered injury history (a torn ACL in 2019, and a sprain on the same knee in 2020) caused him to fall. Averaging over 1,100 yards and eight touchdowns over his last three seasons, Wallace was nevertheless a prolific receiver at Oklahoma State, and providing that he stays healthy, he can become another viable option for Lamar Jackson:

“Tylan Wallace exploded onto the scene as a sophomore in 2018, and despite maintaining that production and offering The Pokes an elite weapon on the outside he seems to have got lost in the shuffle somewhat in an overcrowded position group full of dynamic threats. Wallace doesn’t quite have the game changing ability with the ball in his hand as the likes of the Moore’s, Toney’s and Eskridge’s of this world, but I would argue his game is more diverse; despite being used vertically his crisp route running is underrated and his feisty attitude could serve well from the slot or running a lot more crossers where the game gets more physical. Sometimes his athletic or physical profile brings you hesitation but he routinely outperforms any supposed limitations, and at some point you just have to admit the kid has got the lot. He’s NFL ready and one of my favourites to make an instant impact as a rookie.”

Once again, the Ravens opted for a pass rusher when they selected outside linebacker Daelin Hayes out of Notre Dame. A proven leader both on and off the field, who has personally led rallies for social justice, Hayes has had solid production in college in terms of sacks and tackles. Slightly undersized, and with a recurring shoulder injury, there are some question marks over his capacity to become an elite pass rusher. His ability to get after quarterbacks, however, will be essential to a defensive front that has recently struggled to pressure opposing quarterbacks.

Baltimore’s final selection will be all too familiar to head coach John Harbaugh, having been coached by his brother Jim at Michigan. Nicknamed “Bench Press”, the fullback is an astute blocker who will be a valuable asset to Baltimore’s run-first offense.

Just last year, Wade was one of the highest rated cornerback prospects in the country, and was considered a certain first round pick. However, after an injury-plagued 2020 season, his stock plummeted, and the former Ohio State Buckeye slid all the way to the fifth round. 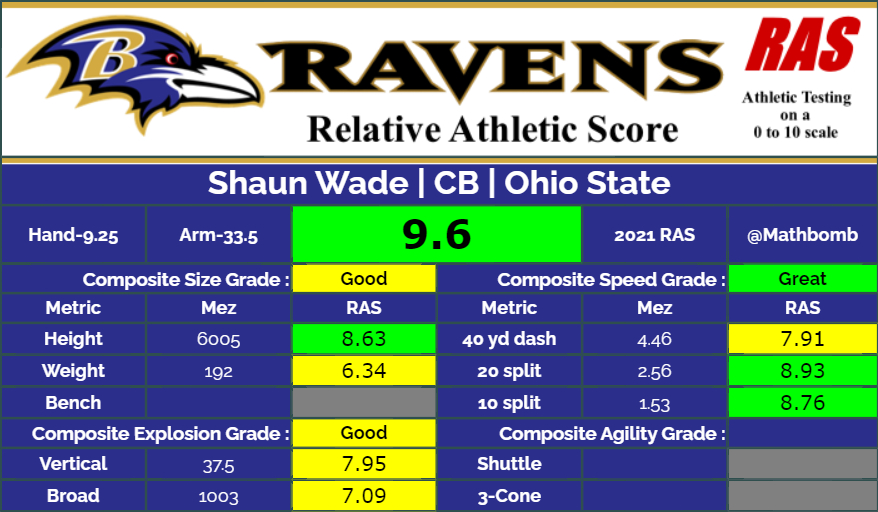 Most effective as a nickelback, the Ravens will most likely use Wade in the slot next season, as he joins an already established secondary. With two All-Pro cornerbacks – Marlon Humphrey and Marcus Peters – Baltimore is a great place for any new cornerback to develop. Wade’s selection has immense upside, and he will be looking to prove many of his doubters wrong in the coming seasons.

In what looks like a home-run-hitting pickup, the signing of safety Ar’Darius Washington out of TCU seems like an absolute steal. The 57th overall ranked player by Pro Football Focus heading into the draft, Washington was overlooked, mainly for being undersized at 5’8, 178 lbs. The second highest graded safety in college football in 2019 according to PFF, he signs with Baltimore as a talented defensive back with good football instincts and a new-found motivation after going undrafted.

The Ravens also signed three offensive linemen, and two defensive lineman to provide further competition for roster spots, as the team looks to fill the gaps on both sides of the trenches.

Overall, the Ravens were successful in finding replacements in the three position groups of the most concern heading into the offseason. While Bateman and Wallace’s selections will be sure to excite Ravens fans, there remains some doubts over the status of the Ravens’ pass rush as we look towards the next season. Perhaps as training camp approaches, the Ravens could explore veteran options via free agency, such as Justin Houston to bolster the position.

Baltimore’s offensive line is still something of a mystery at this stage, as it has undergone a full makeover this offseason. If Ben Cleveland can live up to his billing, he will be crucial to the Ravens’ prolific running game, and to the protection of star quarterback – Lamar Jackson.

Only time will reveal whether DeCosta made the right moves in this year’s Draft. But if a few of these selections prove effective, fans will have much to cheer about as they flock back to M&T Bank Stadium next season.

RORY JONES IS A SPORTS JOURNALIST ORIGINALLY FROM WEST YORKSHIRE. HE HAS BEEN COVERING THE NFL AND NCAA FOR THE LAST FOUR SEASONS FOR BOTH BRITISH AND AMERICAN PUBLICATIONS. RORY IS ALSO THE FOUNDER AND CO-HOST OF THE SPORTS BUBBLE PODCAST, WHICH AIMS TO RAISE THE PROFILE OF THE NFL IN THE UK. FIND HIM ON TWITTER @RORYSJONES11

END_OF_DOCUMENT_TOKEN_TO_BE_REPLACED
Get 20% off PFF ELITE and prepare to win in 2019!