The NFL Draft is over, and we cannot head into the three-month abyss that is the offseason without looking at what all 259 selections mean for each franchise. Whilst too early to judge just how successful a draft class each team’s was, we can look at how rookies fit within schemes, where they stand on depth charts, and who we can expect to make an impact in 2021. We continue our team by team series with the Chicago Bears:

The 2021 draft for the Chicago Bears was far from quiet. They came aggressive, fearless and ready to make moves, starting straight away on Day 1. Having made the decision to move on from Mitchell Trubisky, a QB was always on the cards this off season. Linked with names like Deshaun Watson, Carson Wentz and Russell Wilson, they left their fans feeling somewhat underwhelmed when signing Andy Dalton and naming him as QB1. Talk of them selecting a QB was all over the internet, but as they sat at #20 in round 1, it was unlikely that one of the top names would fall to them.

As the first names started to come off the board, with three QBs taken with the first three picks, the chances of the Bears staying put at #20 and landing their QB were getting shorter with each selection. As they moved into the double figures, two premiere QBs remained available, Justin Fields and Mac Jones – and that’s when GM Ryan Pace made his move.

Chicago sent pick #20 and a 2021 fifth round pick, along with picks in the 1st and 4th rounds in 2022 to the New York Giants, in exchange for pick #11 – a decent haul to go up and get their QB of the future. That man was Justin Fields, who for the majority of the year had been  considered as the best QB in the draft not named Trevor Lawrence.

It is likely that Andy Dalton starts the season as the Bears’ QB1, but Justin Fields put up underrated numbers last season, throwing for 2100 yards and 22 touchdowns in just 8 games. With his big arm and big play ability, good mobility, fantastic accuracy and infamous leadership it is realistic to believe that the Ohio State standout could well be starting in Chicago sooner rather than later.

Day two began and there was plenty of talent still on the board that could have gone in round one. Three particular names were interesting Bears fans; offensive tackles Tevin Jenkins and  Dillon Radunz, and safety Trevon Moehrig. Both Moehrig and Jenkins could have been options for the Bears had they stayed at number 20, and Radunz was one who could potentially have been in play for selection at #52, especially with improvements required on the offensive line.

But Ryan Pace maintained his aggression. He had got his QB in round 1, and now had his eyes on top level protection for his new man. So he picked up the phone and made another move.

Pace traded pick #52, as well as pick #83 in round 3 and pick #204 in round six to move all the way up to make a selection at #36, as well as gaining #151 in round 5. This move meant  there would be 112 selections between the Bears 2nd and 3rd picks in this year draft… but it allowed them to land offensive tackle Tevin Jenkins.

Jenkins was a man a lot of analysts saw being taken in the second half of the first round. Primarily a right tackle in his three years starting at Oklahoma State, he also has experience  at left tackle – which provides the Bears with some fantastic flexibility, especially after their release of long term starter Charles Leno.

With great athleticism, footwork and an exciting ability to manoeuvre defenders off course  and away from play, this young, aggressive, mobile tackle is an excellent option to build a  long term relationship with Justin Fields . Between them, they could be the first pieces of a  whole new offensive future for the Bears.

After the Jenkins pick the Bears and their fans had plenty time to rest, get some drinks in, and binge watch YouTube highlights of their shiny new prospects. After picking 7th in the 2nd round they sat out rounds three or four, and had to wait for pick #151 in round five until they got another reason to be excited. From there they somewhat took centre stage, #151 followed by three picks in round six and one in round seven. There were plenty of new Bears on the way…

At this stage, options were wide open, but an acid test of social media suggested fans were hoping they would address the Wide Receiver position. But first Pace decided to double down on their o-line by taking Larry Borom, the tackle out of Missouri. With lots of potential but an equal amount of refinement needed, Borom seems more of a project pick, with great size for an interior NFL lineman. He has quick movement that contradicts his size, yet with untidiness in his assignments and blocking work it may be a while before Borom makes an impact on the  Bears o-line.

Then followed a very busy sixth round – and what a sixth round it was! They went in with three picks, and came out with Khalil Herbert, Dazz Newsome and Thomas Graham Jr. Three players who all have the potential to make an impact in year 1. Herbert won’t likely worry current RB1 David Montgomery, but has great bursts of speeds and open field elusiveness that should definitely see him take meaningful snaps.

Newsome comes into a WR group which  has playmakers in there already, but with Robinson playing on the tag and Anthony Miller having production and disciplinary issues it is not a settled group. Newsome is reliable with the ball in the air, a fighter and a great eye for knowing when he may be targeted  unexpectedly. He may never be WR1 in Chicago, but could be around for a long time.

“Dyami Brown might get all the plaudits when it comes to North Carolina receivers, but don’t sleep on Dazz Newsome, who had almost the exact same number of his yards as his teammate in 2019 despite operating out of the slot. Newsome projects to the same role in the NFL, and his skillset makes you believe he will thrive in a pass-happy, vertical offense that allows their guys to get open and attack through the air. His lack of functional strength makes it unlikely that he will have a significant role as an outside receiver, which puts him a little further down the pecking order than some similar slot prospects in this class. And it remains to be seen if he enjoys a similar return of separation at the next level. But as a day three guy who can attack all three levels of the field between the numbers, he’s very effective.”

Thomas Graham Jr had opted out of the 2020 season, but showed enough in his previous years starting on the Oregon back end to convince Pace he could make an impact. Another fighter who will play off the WRs, stay close and make receptions really difficult for them – the selection of Graham made for a really nice 6th round for Ryan Pace.

They rounded off the draft with the explosive DT Khyiris Tonga out of BYU. Tonga can come and learn from the teams’ current group and build on his impressive physical traits. This pick  rounded off one hell of a draft for Chicago where they made huge splashes on days 1 and 2  before plugging gaps on day 3 with high value, low risk selections. For a front office under fire, there certainly was a lot to like about the way they did their business over draft weekend

One To Watch: Justin Fields

There really can only be one direction to look when considering a rookie to watch. They traded a fair haul of draft capital to move up and get this man. Fans have been clambering for a QB they can get excited about ever since Mitch Trubisky didn’t live up to expectations, and now those expectations will transfer onto Justin Fields. It seems he is ready for this.

Fields had a strange lead up to the draft. He did everything right, he even beat Number 1 pick  Trevor Lawrence in the college football playoffs, in a game that Fields completely dominated from start to finish. He interviewed well, he played the media game smartly, took good advice in the background and had a very tidy and efficient pro day.

Despite this, he dropped from everyone’s QB2 (behind only Lawrence), to the fourth quarterback taken behind Zach Wilson and Trey Lance. This reason alone will give Fields extra fuel to an already burning fire to prove his worth in the NFL. 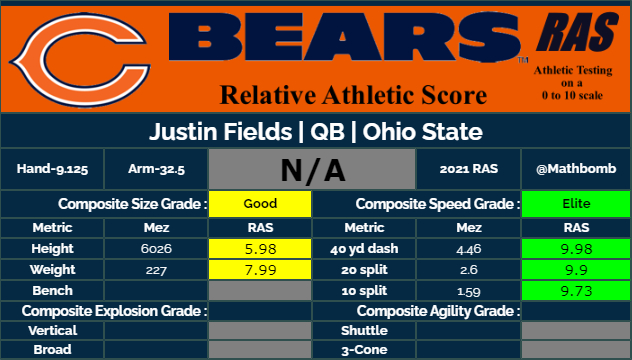 Personality wise he should translate well into an NFL leader, especially if he can benefit from sharing his rookie year QB room with Andy Dalton. Already on day 1 of Rookie Camp, after a wide receiver ran a misread route which led to an incompletion, Fields was straight over to him to highlight what went wrong and where to correct it. On Day 1, Fields had enough understanding of the playbook and play calls, as well as the personality and leadership, to come out and coach improvements in his offense.

Justin Fields, the future leader of the Chicago Bears, has already begun making an impact.

There were different approaches to UDFAs this year, after a year of opt outs, a lack of in-person scouting and no team visits pre-draft. Some teams chose to limit the number of risks and just take a small sample of UDFAs, while others took large numbers in the hopes of unearthing a hidden gem. The Bears definitely fall into the second category.

With a lot of names on the list, there will be hits and misses galore. Some will make the roster, others will find the practice squad and some will disappear from Bears uniforms. There are some names to look out for as roster candidates however…

Gunnar Vogel, an offensive lineman from Northwestern, demonstrated positional versatility with the local Wildcats that could see him find his way into consideration. With experience as a tackle, but athletic abilities more inline with an interior guard, Vogel could provide cover for multiple spots.

Daniel Archibong – the DT from Temple – was a surprise to slip out of the draft unselected. His draft stock likely suffering from Temple’s poor form in his final year, Archibong can be disruptive to interior linemen. He’s adept at squeezing the pocket to put pressure on QBs and create room for onrushing linebackers.

Chicago came to the 2021 NFL Draft to play. They saw their chances and took their shots. This was much needed after an offseason that built up tension and excitement, but failed to deliver; No high ticket QB, no dominant lineman, and no long-term deal for prized asset Allen Robinson.

However they made up for this through the draft by going and getting some top targets in round 1 and 2, relying on quality over quantity when they saw the board falling their way.

Throw in some day three selections who have a very real chance at making an impact and a UDFA haul with potential to throw up some rough diamonds, and you have to look at the Bear’s draft  with admiration. And if you’re a Chicago Bears fan, a bucket load of excitement – it’s time to get excited in The Windy City.

A LONG TERM DOLPHINS FAN, JMR LOVES TALKING AND TWEETING ABOUT PAST, PRESENT AND FUTURE MIAMI DOLPHINS. YOU CAN INTERACT WITH JMR ON TWITTER @JMRPHIN.

END_OF_DOCUMENT_TOKEN_TO_BE_REPLACED
Get 20% off PFF ELITE and prepare to win in 2019!