The NFL Draft is over, and we cannot head into the three-month abyss that is the offseason without looking at what all 259 selections mean for each franchise. Whilst too early to judge just how successful a draft class each team’s was, we can look at how rookies fit within schemes, where they stand on depth charts, and who we can expect to make an impact in 2021. We continue our team by team series with the Los Angeles Chargers:

It was no secret that the Chargers were looking to fortify their offensive line early in this draft. Years of neglect took its toll on Philip Rivers and the team will not want a similar fate to befall their new franchise quarterback Justin Herbert. Amazingly for the Chargers, one of the top two offensive line prospects fell right into their lap at #13.

Rashawn Slater became something of a social media hero in the pre draft process, relocating parked cars and chest squatting 500lbs. He oozes power, has a stout anchor and huge hands that, when they find the numbers of his opponent, are very difficult to disengage from. A quick mental processor and quick across the turf and into his pass sets, Slater looks set to be the ideal replacement – and a huge upgrade – at left tackle for the departed Sam Tevi. Not having to move up to get their long-term blindside protector must be seen as a win for this front office.

The Chargers continued to appease draftniks everywhere with their selection of Asante Samuel Jr. in the second round. The son of former pro bowl Eagles, Patriots & Falcons cornerback Asante Samuel Sr, Junior is an undersized but physical cornerback who is proficient in both press man and zone coverage concepts. With Casey Hayward released Samuel will be mooted to start on the outside opposite Michael Davis, despite his physical stature perhaps suggesting a nickel or slot role to be more suitable.

Taking Josh Palmer in round three turned some heads. Not considered a huge need, Palmer didn’t rack up the stats in Tennessee, and his athletic testing didn’t particularly wow scouts either. What Palmer does bring to the table is an undeniable aggression at the catch point – he simply reels in everything thrown his direction. An astute route runner, Palmer seems to create separation without possessing serious speed or quickness, and his all-round game is reminiscent of Doug Baldwin. With Mike Williams entering a contract year, Palmer perhaps offers Tom Telesco not only collateral in negotiations, but also a viable alternative if Williams departs.

Day three saw The Chargers focus on upside and still address some areas of need. Tre McKitty – much like Josh Palmer – had a disappointing career at Georgia in terms of production, but flashed some athleticism at the Senior Bowl that suggests his best days are yet to come. Chris Rumph, a pickup in round four, is another undersized prospect whose measurables will likely reduce him to a situational role in LA as a designated pass rusher, but was no doubt respected by the Bolts front office for the intangibles he brings:

“Watching Rumph on tape is fun. There’s so much to be impressed by - you can see the dedication he has to football, it jumps off the screen. He’s a film junkie, workhorse and perfectionist. But he’s too small to be on the field for three downs in the NFL. That obviously limits his draft stock, but I think defensive co-ordinators who like exotic blitz packages could have some fun with him. I’d also like to see what he offers as an off the ball linebacker in coverage - speed at that position is vogue in the league right now, and he has bags of it.”

Later selections included reinforcements at linebacker with Nick Niemann and on the interior of the offensive line in Brendan Jaimes; perhaps a direct correlation to the losses of Denzel Perryman and Trai Turner. And in true Tom Telesco style The Chargers saw fit to bring in a running back with an almost identical draft profile to Joshua Kelley, their late-round RB selection in 2020. Larry Rountree is a robust, physical ball carrier who will fight for the hard yards and relieve the pressure on Austin Ekeler, who they hope to keep healthy this season.

One To Watch: Nick Niemann

A common theme in this year’s draft was the drafting of prospects who showcased elite athleticism at their pro days. With little meaningful contact between team and prospect and information at a premium in this COVID-interrupted season, franchise’s felt more comfortable drafting based on traits, a commodity you cannot teach. This was almost certainly the case for Nick Neimann, who was a rather obscure name before dazzling onlookers with a 4.51 second 40 yard dash and a 6.67 second three-cone drill – in the 92nd and 96th percentile across all prospects. This earned him a Relative Athletic Score of 9.51, good enough to rank 105th out of 2,137 linebackers going back to 1987: 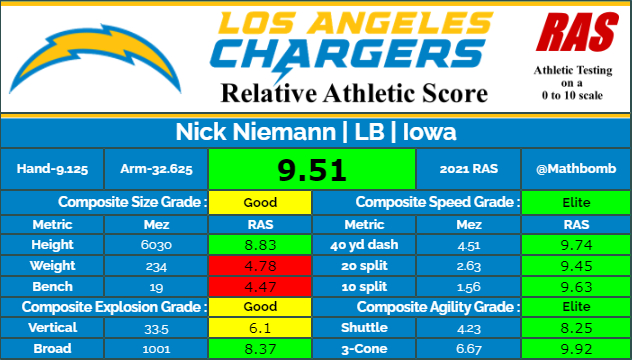 Flashing the athleticism to shine on Sundays, the Chargers will have gone back to the tape, and obviously liked what they saw; an intuitive linebacker with good play diagnosis who lined up predomiantly as a weakside linebacker but sometimes kicked inside in the Hawkeye’s subpackage 3-4 defense. It will be interesting to see Niemann’s utilisation in Brandon Staley’s defense, perhaps offering some competition for Khyzir White.

Pretending to know what teams are thinking with UDFA signings directly after the draft is a fool’s errand; the Atlanta Falcons signed almost a whole roster whilst the New England Patriots didn’t bother to bring a single soul in. Having said that, outside of offering Michael Badgley some competition at kicker, the Chargers will have been pleased to add another linebacker…

Amen Ogbongbemiga was expected to be drafted and fell through the cracks – the Canadian born former Oklahoma State Cowboy struggled to showcase his playmaking qualities in his final year in Stillwater after contracting COVID in the offseason. Despite that, his undeniable nose for the football sees him in and around every play, and he has the potential to earn defensive snaps whilst he forges a big role on special teams.

The Chargers got better over draft weekend, of that there is no doubt. Fans of the Bolts will be optimistic but cautiously so – injury and bad luck have cursed this team for too long to be anything but sceptical that somehow, some way they will find a way to disappoint. That being said, there was a dedicated attempt to improve the offensive line this offseason, something that has been needed for some time, and that alone bodes well for Justin Herbert as he enters his second season in a powder blue uniform.

There are still questions. Have they reinforced that protection enough? Should they have targeted a true three-down edge rusher earlier in the draft? And will Asante Samuel be able to survive on the outside or is he set to be the next Jason Verrett? In a tough division where at least two of their rivals also got better this offseason, the answers to these questions will ultimately dictate whether we see the Chargers back in the playoffs in January next year.

END_OF_DOCUMENT_TOKEN_TO_BE_REPLACED
Get 20% off PFF ELITE and prepare to win in 2019!