The NFL Draft is over, and we cannot head into the three-month abyss that is the offseason without looking at what all 259 selections mean for each franchise. Whilst too early to judge just how successful a draft class each team’s was, we can look at how rookies fit within schemes, where they stand on depth charts, and who we can expect to make an impact in 2021. We continue our team by team series with the Detroit Lions:

The Detroit Lions arrived into the draft with the seventh overall pick. With a new head coach and front office in place, there was a litany of ways the team could have used the selection; wide receiver, linebacker, even quarterback were all positions that got touted by Lions fans and many members of the draft cognoscenti. In the end, the Detroit Lions played the board and took the best player available, selecting Penei Sewell out of Oregon. The offensive tackle was the consensus #1 offensive lineman on almost everyone’s boards.

With Taylor Decker, Jonah Jackson and newly minted center Frank Ragnow already on the roster, one could argue it wasn’t a position of need. However, Sewell is a generational prospect that will seal the right side of the Detroit line. Sewell’s hands and, in particular his footwork, make him a blue-chip player. Add that to his mentality of wanting to compete and maul opponents at the line of scrimmage; it is an excellent bit of business from the Lions brass. No wonder the war room got excited after they turned the card in. The Lions now own two franchise tackles, a franchise center and a developing left guard. The Sewell pick enhances the protection for Jared Goff, and it should open more running lanes for D’Andre Swift. Everything starts with the fundamentals in the trenches.

Detroit’s first pick on day two saw them neglect the wide receiver position and draft a player on the opposite side of the line of scrimmage. The Lions selected interior defensive lineman Levi Onwuzurike from Washington. Onwuzurike may be a tad undersized at 293 pounds to play as a classic nose tackle; nevertheless, in Detroit’s base 3-4, he shouldn’t see much action there, he will surely be the three technique. Onwuzurike is a raw athlete with explosive get-off and the power to penetrate the interior of the pocket. Onwuzurike’s RAS measured at 8.74; he makes up for his lack of size with speed, agility and an explosive first step. Lastly, Onwuzurike embodies the attitude Dan Campbell is attempting to create. In an expletive-laden press conference, Onwuzurike confirmed he is coming to rip someone’s kneecap off.

Detroit then doubled down with their next pick, selecting nose tackle Alim McNeill. Dan Campbell already confirmed they like the 320 pound NC State alum as the nose tackle in Detroit. However, they don’t view him as a pure run-stuffing nose like incumbent John Penisini – McNeill matches his size with speed. The former NC State star is a monstrous figure with violent hands, a sharp burst of speed, and power to generate internal pressure from the zero tech. Again, with Penisini on the roster, it wasn’t a huge need; nevertheless, McNeill is a significant upgrade, can stay on the field three downs and once again reinforces the trenches.

Detroit’s last pick on day two saw them choose Ifeatu Melifonwu. The Syracuse cornerback is a big, rangy defensive back. Note the words defensive back. In some people’s eyes, Melifonwu will develop into a starting outside cornerback. Others view his tools differently; some experts feel he could evolve into a safety or a nickelback on sub-packages. That is where this pick makes a ton of sense. Aaron Glenn is now the defensive coordinator in Detroit; he came from New Orleans, where DC Dennis Allen used a lot of nickel, big nickel and dime formations. Melifonwu’s skillset could see him contribute early on in this role while he develops his all-around skills. Similar to the previous picks, Detroit selected a top athlete with the raw tools to grow.

On day three, Detroit began to draft positions of need. With the 112th pick, they took receiver Amon Ra St. Brown. The USC alum will immediately battle Kalif Raymond for the starting role in the slot. St. Brown owns good hands with decent body control, while he is also a willing blocker in the running game. That is a crucial element Detroit prioritised as they look to build around D’Andre Swift.

“Coming from a football family, Amon-Ra St. Brown follows his brother Equanimious into the NFL. He will hope to emulate what his brother has achieved in Green Bay with a game that looks suited to the role of slot receiver at the next level. Playing with excellent football smarts and knowledge of defensive schemes, St. Brown always seems to find space in the tightest area of the field, and whilst he doesn’t have the deep speed to be a consistent vertical threat he does have enough shiftiness to make a living in the short to intermediate areas. He knows where the chains are and he should prove to be a valuable asset to an NFL offense.”

Moments later, Detroit sent the card in for Purdue linebacker Derrick Barnes. He is a fast, stocky off-ball linebacker with great length in his arms. Barnes could develop into a sideline-to-sideline linebacker that hits everything in sight. The Lions’ last pick was running back Jermar Jefferson. His RAS was relatively poor, but he is an experienced zone runner with solid one-cut ability. Anthony Lynn covets that type of skillset; Jefferson will be a fascinating camp story, even more so now that Detroit has moved on from Kerryon Johnson.

One To Watch: Derrick Barnes

Barnes played a mixture of roles in his collegiate career. He played as an edge rusher as well as an off-ball linebacker. Barnes rarely dropped into pass coverage; this will be a tough learning curve in the NFL when he’s asked to do it. His speed and his tackling make him a solid prospect in run-defense. The Lions were a terrible tackling team in 2020; Barnes’ speed and skill could make him an essential asset from the get-go. With Alex Anzalone and Jamie Collins at the top of the depth chart, Barnes will see action in limited roles. That could be a plus for him while he learns the nuances of playing linebacker in the NFL. Eventually, the Lions will hope he can become the off-ball linebacker on defense. His tools and athleticism are highly enticing; it is apparent why they traded up to get him. However, the football IQ and game awareness need to be refined for him to maximise his impact in a Honolulu Blue jersey. 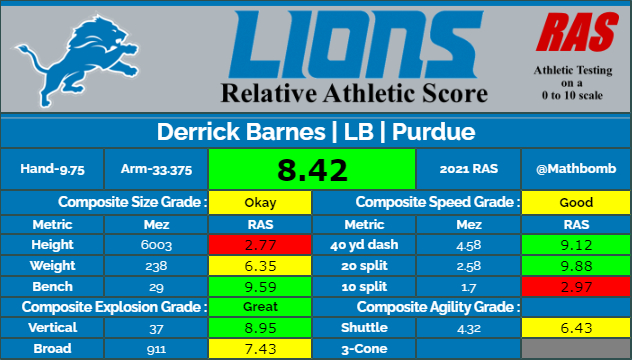 Barnes provides something different to a linebacker room bereft of dynamic athletes. He hits hard and chases even harder. It makes sense why Detroit got seduced by his downhill running style and his desire to knock someone into the middle of next year. How Aaron Glenn uses him alongside the experienced veterans remains to be seen.

It feels pretty evident that the Lions want to see as many wide receivers as possible during the offseason programme. Sage Surratt, Jonathan Adams and Javon McKinley were all picked up by Brad Holmes following the conclusion of the draft. Detroit reportedly offered McKinley a guaranteed $100k. It is audition season for all of the wideouts currently on Detroit’s roster; therefore, it tracks that Antwan Randle-El and staff wish to see as many as they can. With Josh Hill’s sudden retirement, Brock Wright and Jake Hausmann may compete for the third tight-end spot after TJ Hockenson and Darren Fells. Runners Rakeem Boyd and Dedrick Mills also got scooped up, as did Kansas State cornerback AJ Parker who got a $35k guaranteed. Detroit opened up plenty of new options with its UDFA class – the roster needs to get filled out, and these young players now get a shot at making an NFL roster.

The Lions improved the roster over the weekend. In reality, it would have been hard to get any worse. Detroit prioritised athletes with a ton of upside while they fortified a strength in the offensive line. They avoided the pitfall of over-reaching for players; instead, they simplified the process and took the best player available with each pick. The Lions are starting from such a low base that they didn’t need to do that. Now they own several building-block players that share the vision of the GM and head coach. The old mentality of Allen Park needs fumigating; the players drafted are ready to refresh Detroit’s culture, and they are ready to fulfil the coach’s vision of ripping kneecaps off and being unmatched when it comes to work ethic and physicality.

NFL FAN, LIONS FAN AND SOMETIMES ANALYST. THERE’S A STORY ON EVERY FIELD, I’M DETERMINED TO BRING THOSE STORIES TO LIFE IN AN INSIGHTFUL MANNER.

END_OF_DOCUMENT_TOKEN_TO_BE_REPLACED
Get 20% off PFF ELITE and prepare to win in 2019!