The NFL Draft is over, and we cannot head into the three-month abyss that is the offseason without looking at what all 259 selections mean for each franchise. Whilst too early to judge just how successful a draft class each team’s was, we can look at how rookies fit within schemes, where they stand on depth charts, and who we can expect to make an impact in 2021. We continue our team by team series with the Atlanta Falcons:

The Atlanta Falcons were in something of a “no-lose” position heading into the 2021 NFL Draft. Yes, they had a substantial number of holes to fill on both sides of the ball. Yes, their limited cap space meant that they needed to hit on just about every one of their picks. But, in the first round, the Falcons had the luxury of having the pick of the litter. They could take their quarterback of the future on the cards. They had their pick of the most talented defensive players to bolster one of the league’s worst. They might even have the opportunity to pick up a haul of draft picks, if they could find a trade partner.

Instead, the Falcons opted to take a player many consider “the best non-quarterback in the draft”. Kyle Pitts is 6 foot 4, 240lbs, and ran a 4.4 40 at his pro-day. Players of that size and speed do not come around every year, and the Falcons clearly felt they couldn’t pass up on that opportunity. With Kyle Pitts and Hayden Hurst at his behest, first-year head coach Arthur Smith has the opportunity to deploy the two tight end sets that worked so well for him in Tennessee.

Pitts isn’t just a pick for the immediate future, however. As the Atlanta Sports Network noted, Pitts’ long-term future will be as the heir to Julio Jones. His versatility allows him to line up both over the middle and on the outside. Don’t be surprised if Pitts becomes the Falcons’ main target in 2022 and beyond.

With a bevy of borderline first-round talents on the board at pick 35, Atlanta decided to take advantage of the interest teams had further down the board. A trade with the Denver Broncos (picks 35 and 219 for picks 40 and 114) put them firmly in the middle of round two, while effectively moving up the board 105 spots on day 3. With their second-round pick, they selected UCF’s Richie Grant, who is almost certain to be the teams starting safety in 2021. The pick raised a few eyebrows, given Trevon Moehrig was still on the board. That said, Grant is an immediate upgrade to a problem position, and has the upside to make the position his own long term. Grant won more than a few hearts at the Senior Bowl, and the Falcons should be confident in Grant’s outlook, both in the short and long term.

The third-round selection of Jalen Mayfield was the first real headscratcher of the weekend from Atlanta. The Michigan offensive lineman was announced as a guard, despite playing exclusively as a tackle in college. That suggests he is likely to kick inside and challenge for the starting left guard role. With that transition comes growing pains, which isn’t ideal given how porous the Falcons’ offensive line has been in recent years. He’s a solid long-term prospect, but feels like a bit of a punt given how “starter needy” the Falcons are heading into 2021.

Atlanta had a total of 6 picks on day three, between rounds 4-6. “Depth” was the word of the day, and the Falcons appear to have fleshed out a number of positions. With their fourth-round selections, Atlanta added defensive back Darren Hall, and center Drew Dalman. Hall is a selection that surprised more than a few. It makes sense when you take into account that his position coach at San Diego State is the son of current secondary coach, Jon Hoke. The Falcons will be hoping that familial connection between coaches will glean some information other sides won’t have picked up on. Hall will likely compete to be the sides’ starting nickel corner, though his safety experience may lead him to that particular position.

“Darren Hall will be a ‘sleeper’ for a lot of draftniks this year and it’s not hard to see why: He’s got excellent smarts and anticipation, is shifty and sticky on short to intermediate routes, and brings pleasing physicality when it’s time to deliver a hit. He transitioned from safety to cornerback after one year in San Diego, and whilst it paid dividends for him I think his best role will be as an inside corner in the NFL, where his deep speed won’t be tested and his lateral movement can shine. He looks to head into the league as a bottom of the roster prospect with the ability to work his way into rotation duties.”

With their remaining four selections, Atlanta went defense-heavy, which is understandable given how poor it was in 2020. Defensive linemen Ta’Quon Graham and Adetokunbo Ogundeji, of Texas and Notre Dame respectively, will hope to help improve a Falcons pass-rush that registered only 29 sacks in 2020.

One To Watch: Frank Darby

The Falcons, by and large, have had quite a lot of success picking up wide receivers in recent years. Most recently, the emergence of Russell Gage Jr, a sixth-round pick in 2018, as a legitimate WR3 has delighted Falcons fans. Given their lack of financial wiggle room over the next couple of seasons, and Gage’s quickly dissipating contract, Atlanta seem to be getting ahead of themselves in Darby. 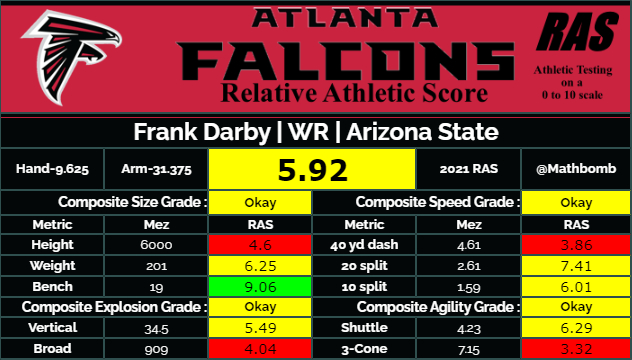 Darby had a spotty college career, marred by injury more than anything. But his build, and decent speed, makes him an interesting development piece. If nothing else, his general enthusiasm has endeared him to Falcons fans already. If this season really is the last we’re to see of Julio Jones and Russell Gage, Frank Darby has a shot of stepping into their roles down the line.

The Falcons cap situation means they absolutely have to add young, and cheap, players to their roster. With that in mind, they opted to make the most of this seasons crop of undrafted players, picking up no less than 20 names from the group. While it’s difficult to imagine many making the cut come September, there is enough there to get Falcons fans excited.

The headliner of the line up is Javian Hawkins, who enjoyed a very productive college career with the Louisville Cardinals. Hawkins managed just over 2,300 rushing yards over two seasons as a starter, pounding in 16 touchdowns on the way. Hawkins will be reunited with current Falcons offensive line coach Dwyane Ledford, who was his offensive coordinator at Louisville. With a strikingly similar make-up, and build, to the poster boy of UDFA’s, Phillip Lindsay, there are high hopes Hawkins can crack the NFL in Atlanta.

The Falcons were, and still are, in a bit of a talent hole. This class should go some way to helping them dig out of it. First year general manager, Terry Fontenot, preached the “BPA” method in his opening press conferences, and the Falcons largely stuck by that.

The addition of Kyle Pitts will give opposing defensive coordinators sleepless nights as they look to silence a deadly Falcons air attack. He might also extend Matt Ryan’s career by a couple of years, as he grows as a pass catcher. The addition of two interior offensive lineman, as well, shows a commitment to keeping their best ever quarterback off his back.

The Falcons defense might well improve simply thanks to the addition of Dean Pees, but they’ve given him a number of pieces to play with. With one of the softer schedules in 2021, the Falcons defense should have a better time of it than they did in 2020, and that’ll only help this group of rookies find their feet. The Falcons will be a vastly improved outfit in 2021, make no mistake. But this draft class will be a big reason why the Falcons will sustain that improvement in 2022 and beyond.

END_OF_DOCUMENT_TOKEN_TO_BE_REPLACED
Get 20% off PFF ELITE and prepare to win in 2019!