The NFL Draft is over, and we cannot head into the three-month abyss that is the offseason without looking at what all 259 selections mean for each franchise. Whilst too early to judge just how successful a draft class each team’s was, we can look at how rookies fit within schemes, where they stand on depth charts, and who we can expect to make an impact in 2021. We continue our team by team series with the Tennessee Titans:

It was no surprise that the Titans were the team that stopped the fall of cornerback Caleb Farley. Tennessee are no strangers to risky picks with high upside. Jeffrey Simmons was a top-10 talent in 2019 but a torn ACL saw him drop. Like Simmons, Farley has medical concerns, after multiple back procedures. Once again the Titans believe the potential greatly outweighs the negatives.

Without the red flags you could argue Farley was the top corner in this year’s draft. Long and athletic he has fantastic speed to cover true number one receivers. Although his experience is limited, having been a high school QB and opting out last year, the flashes are outstanding.

The departure of Adoree Jackson in free agency made the position a priority and they can now pair Farley with last year’s second rounder Kristian Fulton.

The Titans whiffed big on Isaiah Wilson last year. The first round tackle out of Georgia was somewhat of a surprise selection but nobody could have envisaged that he would be out of the game after one season. It meant the Titans had to return to the offensive line early this year. While Dillon Radunz is undersized for a tackle, he is technically astute. The NFL will be a big step up for the North Dakota State product but he will get every opportunity in the summer to end up the starting right tackle.

The Titans proceeded to supplement their defense in round 3 with two further selections. Elijah Molden will surely get a shot at the starting nickel job but also has safety versatility. The undersized former Washington Husky was arguably the best slot defender in the process. Georgia’s Monty Rice was seen as a bit of a reach in some quarters but his leggy, athletic build leads analysts to believe he could be the long-term replacement to Rashaan Evans.

The final day of the draft saw the Titans add two hard working defenders to the fold. Rashad Weaver was the grinding, relentless motor guy across from Patrick Jones in the Pitt defense last year. Weaver logged 7.5 sacks in 9 games in 2020 and projects to be part of a solid rotation behind Bud Dupree and Harold Landry.

Oregon’s Brady Breeze was a sixth round pick and while he wasn’t the flashiest member of that secondary he was a physical and versatile safety. You can imagine he will get plenty of reps on special teams as he starts his career in Tennessee.

“Brady Breeze flashes some traits that aren’t easily coachable in the NFL, but there are big areas of concern that have alarm bells ringing for me. His movement and speed are capped at just below average, making him a tricky sell as anything other than an interior box safety who can dominate run duties and just about hold up on shallow zones across the middle. He’s had one good season in Eugene, and little else to put on his resume, making him a risk. But those highlight reel, game-changing plays along with a tenacity that will shine on special teams should at least see him come off the board before draft weekend is done.”

Offensively, the task was to find a replacement for the outgoing Corey Davis. AJ Brown will lead the receiving group in 2021 but Josh Reynolds is the only other notable name on the roster.

They took two swings at finding a replacement. The most likely, is fourth rounder Dez Fitzpatrick. He has the size and ability to get a decent chunk of targets in this offense. While he isn’t a burner, he is excellent in contested situations and has the body control to be a an effective route runner who can hit the ground running in a pro scheme.

One To Watch: Racey McMath

Racey McMath is relative unknown as he enters the NFL. He was unfortunate enough to be buried on a depth chart behind Ja’Marr Chase, Justin Jefferson and Terrace Marshall Jr at LSU. He only contributed 17 receptions during the National Championship season and only 33 in his college career. 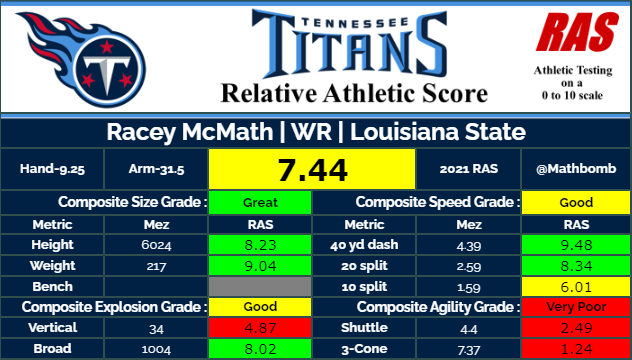 At 6’2, 211lbs he would fit the bill as a Davis replacement. It would be a massive leap for him to assume that role but it wouldn’t be mind-blowing to see the sixth rounder end up a starter, especially with such a weak group ahead of him. With special teams experience, that likely becomes his route onto the roster but his combo of size and speed may prove too tempting not to give him reps on offense.

Anthony Firkser will have big boots to fill this season as he assumes the TE1 role from Jonnu Smith. Smith’s departure does free up some space in the tight end room and that could be something undrafted free agent Miller Forristall takes advantage of. The former Alabama player isn’t a dynamic threat but a ‘steady-eddie’ type who is used to the big game atmosphere. That could mean the Titans eventually come to trust him with snaps.

Elsewehere, Michigan State nose tackle Naquan Jones will hope he can make an impact in the pre-season. Daylon Mack is pencilled in as the current incumbent so the spot really should be up for grabs. A strong showing from Jones could be enough to persuade the Titans to keep him on the 53 come the start of the year.

The Titans appear to have made some shrewd selections in the 2021 NFL Draft. So long as Caleb Farley stays healthy he could be the steal of the first round. His size and speed make him difficult to shake for receivers and he could still prove to be better than the cornerbacks selected ahead of him. Further bolstering the position with Elijah Molden was a nice move, particularly considering nickelback is a starting role in the modern NFL.

That said, there is plenty of risk to their picks. Dillon Radunz is light for a starting right tackle and faces a steep learning curve. As a developmental prospect he is a no-brainer but how much time is there to develop when Kendall Lamm is the starter? Monty Rice fits the athletic profile of an NFL linebacker but expecting him to put pressure on Rashaan Evans in year 1 is a stretch. Leaving the receiving options until Fitzpatrick in the fourth and the size/speed gamble of McMath could ultimately leave the Titans and Tannehill underpowered in terms of pass catchers.

END_OF_DOCUMENT_TOKEN_TO_BE_REPLACED
Get 20% off PFF ELITE and prepare to win in 2019!