The NFL Draft is over, and we cannot head into the three-month abyss that is the offseason without looking at what all 259 selections mean for each franchise. Whilst too early to judge just how successful a draft class each team’s was, we can look at how rookies fit within schemes, where they stand on depth charts, and who we can expect to make an impact in 2021. We continue our team by team series with the Washington Football Team:

There are many different ways to go about building a team and using the draft to do so, and in Washington they took the approach of building on a strength and taking the best player available. Based on their draft position it was assumed either a Linebacker or Offensive Tackle would be selected by the WFT, and they decided the strengthen an already excellent defensive roster by taking Jamin Davis from Kentucky.

Although Washington had a top tier defense in 2020 the Linebacker corps was not the best, and they looked to address this with Davis who will add speed and coverage ability that they sorely lacked. He isn’t the most experienced player due to a lack of playing time in his first 2 years at Kentucky, but given his breakout in 2020 the WFT will hope the upward trajectory continues and he solidifies the LB group, making them a strength rather than a weakness.

The WFT had 3 picks on day 2, and immediately started to address offensive needs with the pick of Offensive Tackle Samuel Cosmi. When the pick came in it was not clear where Cosmi would play, but given the roster moves recently it seems that Cosmi will start his WFT career at Right Tackle. Cosmi started 34 games for Texas during his career and gained a lot of fans (not just our own Alex Chinery); he is not perfect and still has a lot to work on but I would expect him to start and be solid year one – and Washington will hope he progresses to be an above-average starter very soon.

In the third round, Washington took Benjamin St-Juste, a CB from Minnesota. After signing William Jackson in free agency corner was not seen as a need, but Washington took St-Juste as they believe in the upside even if the results are not short term. Although he played cornerback at college, given his skillset a move to safety is a possibility which may also delay his impact on the roster.

With their second pick in the 3rd round, Washington looked to add depth and talent at the Wide Receiver corps with the pick of Dyami Brown. Dyami is a deep ball specialist which I am sure will intrigue Ryan Fitzpatrick; he still needs work on the shorter routes but given the strengths of especially McLaurin and Samuel, Brown is an intriguing complementary piece to the Washington Offense.

Day 3 saw six players picked by the WFT; 2 offense, 3 defense and 1 special teamer. On the offensive side, they took John Bates and Dax Milne. In Bates they have drafted an average athlete who is a good blocker – they will be hoping that TE Coach Pete Hoener can work the same magic he used on Logan Thomas and get production from Bates. In Dax Milne WFT took Zach Wilson’s favourite target; he isn’t the greatest athlete and won’t make it on the outside in the NFL. He will also have to work on routes to play slot but he has a chance to do that, although it will be a challenge.

“Calling a pass catcher a slot receiver used to be a little insulting, but in today’s pass-happy league the position is almost a permanent fixture in an offense. Dax Milne has the skillset to thrive in that role at the next level; ultra-competitive and a junkyard dog mentality in the middle of the field, Milne will get you the hard yards that others won’t. His ridiculous ball skills are complemented well with the effort he has put in to perfecting his route running, and what it has produced is an elusive but tough receiver to whom denying the reception is extremely difficult. His lack of true play speed will be exposed more in the NFL, and you do wonder how much of a product of his environment he was during his final year in Provo, but I can think of much worse ways to spend a day three pick.”

On Defense the WFT took Darrick Forrest, William Bradley-King and Shaka Toney. Forrest is a good tackler who tries to be physical all over the field. He is not elite in any specific area but will add depth to an improving secondary.   Bradley-King will be looked to fill the rotational role lost with Ryan Kerrigan leaving; he has a high football IQ but it is to be seen if he can transfer this to the NFL. Finally, they took Shaka Toney who has the ability to also replace Kerrigan but he needs to massively improve his consistency. Given the Line WFT have, bringing in Bradley-King and Toney makes sense, and Washington will hope for real production from their limited snaps.

Finally, Washington boosted their special teams with Long Snapper Cameron Cheeseman. Not only does Cameron have a spectacular name, but they have a starter to replace veteran LS Nick Sundberg who was released this summer. Some may scoff at the pick but he will start…

One To Watch: Dyami Brown

I think the one to watch on this draft is easy and it is Dyami Brown. Obviously it is hyperbole, but when Cris Collinsworth suggests he could have been a first rounder and you get him in the 3rd round this is got to be seen as a steal. Given the skillset of Ryan Fitzpatrick someone like Brown who is a terrific athlete and fantastic vertical route runner would be a perfect match. 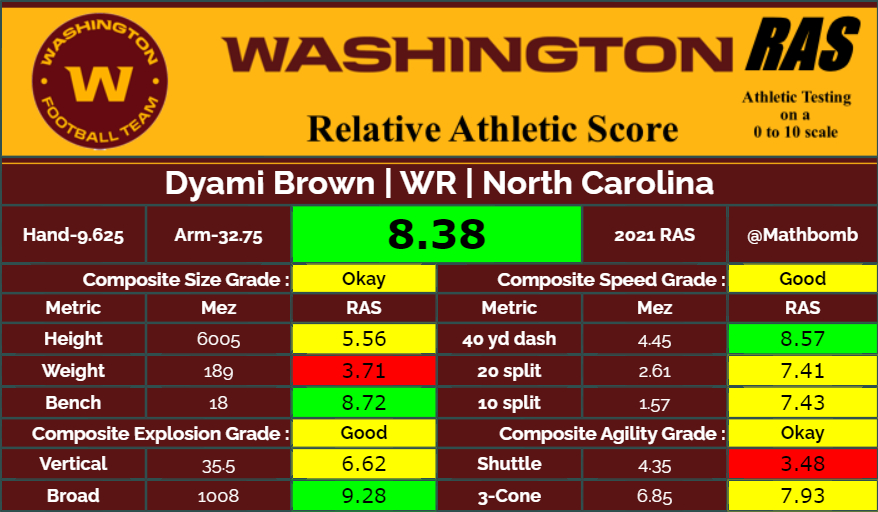 Brown will also get to shine given the focus teams will give Terry McLaurin, Curtis Samuel and Logan Thomas. He is a complimentary piece in the purest form, and I expect him to excel in Washington and be flying up fantasy draft boards over the summer months – and if he isn’t drafted he will be one of the most sought after waiver wire picks early on in 2021.

Washington picked up just one undrafted free agent in Jaret Patterson, a Running Back out of Buffalo. Patterson has a very big supporter in Chase Young who went to High School with Patterson, although it will be his performances in training camp that will keep him on the roster. Patterson will try to make the roster as a complimentary back to Gibson and McKissic, especially given the Limited production from Peyton Barber last season. Patterson needs to beat out Barber and Lamar Miller to make the roster and I believe he has a real chance to do that.

As a Washington fan for as long as I can remember the franchise being logical and patient is not something I am used to, but under Rivera this has started to happen. In Davis, Cosmi and Brown Washington could have 3 long term starters from this draft and this is the kind of thing successful franchises do. Are Washington a successful franchise? In recent years absolutely not, but maybe the tide is turning.

END_OF_DOCUMENT_TOKEN_TO_BE_REPLACED
Get 20% off PFF ELITE and prepare to win in 2019!