The NFL Draft is over, and we cannot head into the three-month abyss that is the offseason without looking at what all 259 selections mean for each franchise. Whilst too early to judge just how successful a draft class each team’s was, we can look at how rookies fit within schemes, where they stand on depth charts, and who we can expect to make an impact in 2021. We continue our team by team series with the Las Vegas Raiders:

The 2021 offseason was cruel to the Las Vegas Raiders. With a large chunk of the salary cap sliced off, the Raiders had a decision to make and began dismantling their offseason piece-by-piece, though it felt more like the clumsy pull of the bottom Jenga block. The defense needed a real overhaul too, but protecting Derek Carr took precedence.

The Raiders selected Alabama tackle, Alex Leatherwood, at #17. He’s an imposing force at 6-foot-6 and his raw power figures to factor into a Raiders run game that needs some added juice. His pass-protecting is rather one-dimensional and he can be beaten out by more instinctive rushers. Leatherwood could develop into a fine tackle or even transition to guard due to his lack of fluidness in his lower, but the Raiders passed on some better talent to draft him. That could hurt them in the long run.

If you flip the Raiders’ first and second-round picks, and then squint a little so you can ignore some better value picks, then it makes a little sense. Las Vegas spent their second-round pick on the consensus number one safety in the draft, TCU’s Trevon Moehrig. The Jim Thorpe award winner for the nation’s best defensive back, Moehrig excels as a single-high safety who can roam the middle of the field and disrupt in coverage. He’s also proven to be a deft ballhawk with seven career interceptions at the college level. Best of all, this was a real position of need for the Raiders.

The third round saw the Raiders continue to address positional needs, adding defensive end Malcolm Koonce out of Buffalo and Divine Deablo from Virginia Tech. Koonce is a raw prospect with good length and hands and should provide valuable depth for a defense that could use situational pass-rushing. Deablo was listed as a safety but announced on draft night as a linebacker. Regardless, the Raiders could use depth at both positions. He’s proficient in coverage and boosts above-average size for a safety.

The Raiders added Tyree Gillespie out of Missouri in the fourth round. Drafting three safeties might seem excessive to some, but it’s a smart way to build a roster in today’s NFL. As the NFL transitions to a heavy passing league, it makes sense to draft versatile playmakers who can play against the run and in coverage. That’s what Gillispie can do. He’s a competent tackler and had 12 passes defended in college. It’s all about the need.

Round five started with the Raiders loading up on more depth in the secondary, although Nate Hobbs could potentially start in the slot. The former Illinois cornerback is smart in coverage and has decent size and athleticism. He’s probably more of a developmental pick, but if he impresses early on then he could see significant playing time.

“A rather refined skillset for a day three prospect, Jimmy Morrissey’s hard work and dedication has led him from 0-star recruit to the doorstep of the NFL in four years. He has negligible baseline physical traits which, coupled with his arm length, is going to make life hard work for him at the next level. His impeccable technique will compensate for his subpar strength but only so far, and whichever team takes him will have to put him in an offense that can accentuate his smarts and smoothness - likely a balanced attack with plenty of zone blocking schemes involved. The quiet demeanour doesn’t bother me one bit - no shrinking violet turns down a scholarship offer to walk on at a division 1 school and become a four year starter. At the very least he’ll be a dedicated practice squad player, and I think he’ll have enough admirers to see his name called in the later rounds.”

Jimmy Morrissey adds some much-needed depth to a rebuilding offensive line too. The seventh-round pick out of Pittsburgh was the 2020 Burlsworth Trophy winner for the nation’s best walk-on. He’s a grinder, versatile, and is a fundamentally sound blocker with excellent technique. Morrissey isn’t a day one starter, but he can move around the interior and that flexibility can get you places in the NFL.

One To Watch: Trevon Moehrig

While the Raiders’ first-round pick might be perceived as a reach, Moehrig in the second-round could prove to be an absolute steal. The nation’s best defensive back rightly deserves that moniker for his performances in college. Jonathan Abram has failed to stay on the field and to live up to his first-round selection so the need for a safety was glaring.

Moehrig seemingly fell to the second round because of a back issue that affected his pro day and contributed to a poor workout. It was either the workout or the fear of a lingering injury that scared teams off, but he should be ready to go before the start of the season. Even in his poor workout, Moehrig posted a Relative Athletic Score of 7.37, with his 40-yard dash clocking in at 4.52. That’s just a peek at Moehrig’s athletic ability, though. He doesn’t have elite deep speed but can still fly around the field and has good closing speed. 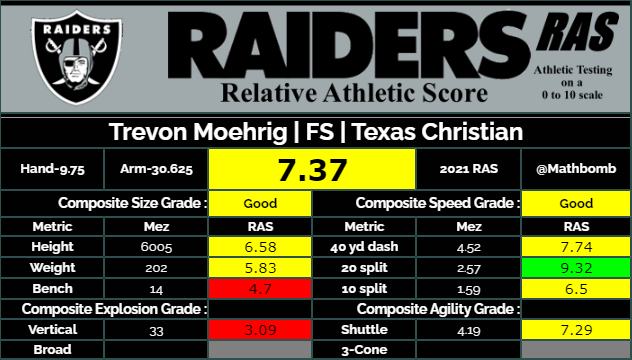 The Raiders now have former Chargers head coach, Gus Bradley, as their defensive coordinator this year, and his defensive scheme could get the best out of Moehrig. His scheme utilises a lot of Cover 3 which would seemingly have Moehrig line up in his best role as a deep third safety, patrolling the middle of the field and breaking up passes.

The Raiders aggressively pursued undrafted free agents this season, seemingly in an attempt to accrue some much-needed depth to the roster. In their pursuit, they might have hit the jackpot with former BYU tight end Matt Bushman. Prior to the season, Bushman was viewed as a top tight end prospect before an Achilles injury derailed his season. He’s a decent pass-catcher with nice athleticism, but he’ll need to get tougher to make an impact at the position.

The Alex Leatherwood pick turned heads early on, and it could be another case of the Raiders overvaluing players and leaving talent on the board, especially with the likes of Teven Jenkins and Christian Darrisaw still available. The theme of the draft, though, was filling positional need and adding depth at high-value positions.

The additions to the secondary, defensive line, and offensive line are moves conducive to successful roster building. However, they reside in a division where the Chargers and Broncos (outwith their quarterback situation) have improved and the Chiefs remain the Chiefs. The Raiders still have ways to go before we can take them seriously.

Based in Glasgow, Scotland, Thomas is a fan of athletic guards and clean route-runners. He previously covered the Cleveland Browns for OhioVsEveryone.

END_OF_DOCUMENT_TOKEN_TO_BE_REPLACED
Get 20% off PFF ELITE and prepare to win in 2019!