The NFL Draft is over, and we cannot head into the three-month abyss that is the offseason without looking at what all 259 selections mean for each franchise. Whilst too early to judge just how successful a draft class each team’s was, we can look at how rookies fit within schemes, where they stand on depth charts, and who we can expect to make an impact in 2021. We continue our team by team series with the Minnesota Vikings:

The Vikings approached the 2021 NFL Draft at a crossroads. After another distinctly average 2020 season, Rick Spielman and Mike Zimmer needed to make smart selections in the draft to bridge the gap between Minnesota and NFC North kings, the Green Bay Packers. Therefore it was a pivotal weekend in Cleveland for the highly respected front office. There was plenty of conjecture surrounding Minnesota’s first-round pick and what they would do with it. Minnesota needed help in the trenches on both sides of the ball.

Therefore it made sense that Minnesota drafted offensive tackle Christian Darrisaw. The big man is a fabulous blocker in pass protection. His length, powerful levers and strength make him an excellent offensive tackle. Darrisaw should slot in immediately as Minnesota’s starting left tackle. Kirk Cousins gets a young starlet to protect his blindside, and the better news was that Minnesota traded down for additional picks and still got their man. While Penei Sewell and Rashawn Slater stole the spotlight, Darrisaw is no scrub. The Vikings did excellent business on day one of the draft.

Roger Goodell never called the Vikings’ name in round two; he made up for that by calling them four times in round three. Day two is where the Vikings went to work as they filled out their draft class. Minnesota started by taking a fascinating prospect at quarterback. Kellen Mond is a big-armed, physically intriguing player. The former Texas A&M Aggie is a project with a different skillset to incumbent quarterback Kirk Cousins. Mike Zimmer is a risk-averse head coach; this pick is risky – what Mond could develop into is tantalizing, but does that mesh with Zimmer’s philosophy on offense? Following Mond in the pre-season will be must-watch TV.

Minnesota then drafted linebacker Chazz Surratt. The North Carolina product will inject some athleticism and dynamism into the Vikings linebacker room. The former quarterback provides a unique blend of size and speed at the outside linebacker position. Given his relative inexperience at linebacker, Surratt lacks discipline, particularly in pass coverage. Although his head coach is a defensive mastermind, Zimmer developing Surratt could be an inspired move.

After Surratt, Minnesota went back to fortifying the offensive line. Wyatt Davis is a gritty, well-polished guard with plenty of power. Davis is a mauler; he loves to root out defensive linemen and create significant gaps for the ball carrier. A classic Mike Zimmer pick, the former Buckeye brings nastiness and aggression and should help Dalvin Cook find more space in the running game.

Minnesota concluded its third round by selecting defensive end Patrick Jones from Pittsburgh. Jones is a speedy pass rusher who will provide Minnesota with superb athleticism in the pass rush. Jones’ weakness may be that he doesn’t contain or set the edge in the run; however, Jones is another player with a ton of athletic gifts and potential.

The Vikings started round four by selecting Iowa running back Kene Nwangwu. He will fill a space on the running back depth chart, plus he will add something slightly different from Dalvin Cook and Alex Mattison. Minnesota then chose safety Camryn Bynum five picks later. With the safety room getting older, it makes sense to draft a player with essential tools to evaluate. Bynum tracks the ball well and can read the play to a solid level. He will be a rotational piece in 2021 while he learns the game.

Janarius Robinson came off the board as the Vikes went back to the defensive end position. He is a rangy defensive end with a good engine. Robinson chases well and can get up the field. His drawbacks are that he is not of a big build and he lacks speed. Bigger, more dynamic players may control him at the line of scrimmage:

“In a draft class full of speed rushers, Janarius Robinson offers something different. Despite finding himself in a dysfunctional defense he imposed himself on football games at FSU, dominating the point of attack and ragdolling blockers in his desire to crush run games. His length will have scouts drooling, and he has shown proficiency to operate in odd and even fronts. If he can develop his pass rush then he has all the tools to be a three-down, game changing lineman.”

The Vikings rounded out their draft by opting for tight end Zach Davidson and defensive tackle Jalen Twyman. Davidson will slot into the depth chart now that Kyle Rudolph is gone, and may also contribute as a punter! Meanwhile, Twyman could develop into one of the draft steals. He is a thick, heavy-set run stopper with decent power to collapse the pocket on the inside. Twyman is one to watch.

One To Watch: Chazz Surratt

Chazz Surratt is an exciting pick with so many elements to his game. Surratt arrived in North Carolina as a quarterback, but after a torrid freshman year that ended with injury, Surratt got persuaded by Mack Brown to switch to the defensive side.

In his first season as a linebacker, Surratt excelled as he earned All-ACC First Team honours. His explosive athleticism and unique look at a game made him one of the best players in the conference. Surratt’s biggest strength is his attitude and aptitude to play football. He is hungry to be the best player possible. That flashes through in his on-field play. He chases, pursues and plays every snap at 100mph. His RAS score graded at 8.52, while his speed composite got rated as great. 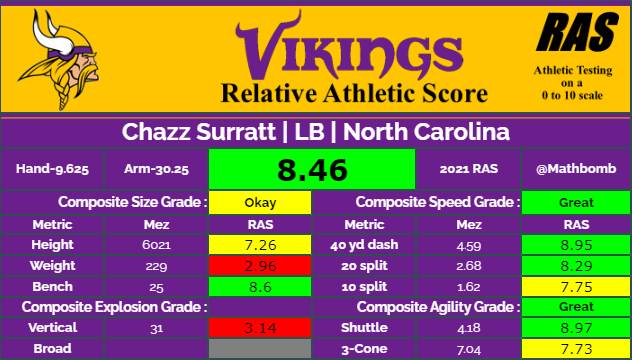 Conversely, that can also be a negative; Surratt sometimes takes poor angles at tackles due to his over-eagerness. The other downside to Surratt’s game is his weaknesses when dropping into coverage. Surratt is an every-down linebacker in the making. His willingness, speed and power give him a solid foundation. He needs the development time to become the finished article; nevertheless, Surratt already looks to own the tools to be the WILL linebacker in Minnesota. His fundamentals in terms of tackling and hitting are healthy; Mike Zimmer could work wonders with Chazz Surratt. .

Pretending to know what teams are thinking with UDFA signings directly after the draft is a fool’s errand; the Atlanta Falcons signed almost a whole roster whilst the New England Patriots didn’t bother to bring a single soul in. Having said that, the Vikings bought in some interesting names to keep an eye on.

Tuf Borland is a player the team signed to bolster the linebacker room. Minnesota also scooped up exciting receiver prospect Whop Philyor. The Indiana wideout is a shifty slot receiver that could get snaps on special teams. Sticking with special teams, Minnesota also addressed punter and kicker as they drafted Memphis kicker Riley Patterson and former MLB draftee 31-year-old Zach von Rosenberg. Both of those players could make the roster with a strong offseason.

The Vikings enjoyed an excellent draft. They drafted players in areas of need and stocked the team with good talent. Minnesota’s draft screams complete faith from the front office in the coaching staff. Rick Spielman selected players with quality athleticism and the raw tools that can get developed by top coaches. Minnesota added protection for their statue-like franchise quarterback Kirk Cousins, and the organization got some insurance in the form of Kellen Mond. On the defensive side, the Vikings infused dynamism at all three levels. The Vikings ensured that their defense got re-stocked while their franchise quarterback got help. Minnesota took a step forward through the NFL Draft; how big that step is; only time will tell.

NFL FAN, LIONS FAN AND SOMETIMES ANALYST. THERE’S A STORY ON EVERY FIELD, I’M DETERMINED TO BRING THOSE STORIES TO LIFE IN AN INSIGHTFUL MANNER.

END_OF_DOCUMENT_TOKEN_TO_BE_REPLACED
Get 20% off PFF ELITE and prepare to win in 2019!