The NFL Draft is over, and we cannot head into the three-month abyss that is the offseason without looking at what all 259 selections mean for each franchise. Whilst too early to judge just how successful a draft class each team’s was, we can look at how rookies fit within schemes, where they stand on depth charts, and who we can expect to make an impact in 2021. We continue our team by team series with the Cincinnati Bengals:

The hot topic in the lead up to the NFL Draft was whether the Bengals would go with an elite offensive tackle or elite receiver. While the mainstream talking heads felt protecting Joe Burrow was paramount, fans and those close to the team knew that the pick would be Ja’Marr Chase.

Chase and Burrow paired up for a record breaking National Championship run as LSU Tigers in 2019 and the temptation to reunite them was too much for the Bengals front office. They felt the depth of the offensive tackle class allowed them to take the player they rated slightly higher.

If you ignore the naysayers who feel that Penei Sewell was the only reasonable option given that Burrow has already endured a significant injury from poor o-line play, then Chase makes a lot of sense. It was a down year for AJ Green who departed for Arizona in the offseason and while Tee Higgins and Tyler Boyd played excellently, the team felt it was missing a true number 1.

So long as Burrow stays upright it should be one of the most fearsome receiving trios in the NFL.

As you can imagine the focus shifted to the offensive line on Day 2. The Bengals should have felt fairly happy with their decision as the clock ticked to them on pick 38. There were several solid options available to them, so much so they moved back eight slots. Their trade with the Patriots netted them two extra picks in the fourth round.

The surprise was that when the Bengals did pick it was Cincinnati native Jackson Carman. Most had Carman pegged as a third rounder so to see him picked by the Bengals was somewhat of a surprise. Carman’s career will now become inextricably linked to his peers, the Bengals could have taken Tevin Jenkins at pick 38 and also had Liam Eichenberg and Walker Little available at that point. Carman was the selection above both Sam Cosmi and Dillon Radunz. The success of the trade will depend on how those players adapt to life in the NFL.

Carman should slot in as a starting guard for this Bengals team who confirmed their belief in free agent signing Riley Reiff by not taking a player to challenge him at the tackle spot.

With two more picks in their pocket the Bengals were free to take the best player available in the third round. They did exactly that by adding Texas edge rusher Joseph Ossai. Ossai addressed a significant need for the Bengals, who lack speed off the edge given the departure of Carl Lawson. He should step straight in as a passing down rusher but the ceiling is sky high for such an athletic defender.

Day 3 became the most substantial part of this year’s draft for Cincy. With seven picks the Bengals needed to add depth to a wafer thin roster. They worked hard to address the holes left by departing veterans. The versatility of Cam Sample to play off the edge or as a 3-tech should help replace Carlos Dunlap. Chris Evans was a flyer in the sixth round but he could certainly take on some of the snaps Gio Bernard will leave behind:

“There is no doubt that Chris Evans represents a huge gamble in terms of his projection to the NFL. He simply hasn’t had the body of work necessary to make a confident appraisal of his skillset, but from what he has got on film there are definitive traits and flashes of ability that leave you excited. Teams will have to get to the root of his inability to see more snaps, and the academic suspension offers another level of unknown to his CV. As a late-round prospect though he gives the suggestion of serious upside; a running back who potentially has three-down capabilities and a complete game that only a handful of others in this draft class possess. He can fit in any running game and is well worth a punt towards the end of day three.”

Elsewhere the Bengals were determined not to get caught off guard, like in 2020. The opt-out of Josh Tupou and injury to DJ Reader left them with street free agents filling the nose tackle position. Another LSU alum Tyler Shelvin will help add competition to that spot. Many were surprised they used a fifth round pick on Florida kicker Evan McPherson but he was very much ‘their guy’ and head coach Zac Taylor knows the importance of a reliable kicker given how many close contests the Bengals were involved in.

One To Watch: D'Ante Smith

Riley Reiff is a stop-gap at right tackle for the upcoming season. He is the steady-eddy type veteran the Bengals hope to bring in to make their o-line serviceable. They don’t expect all-pro production but they do hope that prize asset Burrow will be adequately protected. That said, there will be opportunities at offensive tackle in the future. Fourth round pick D’Ante Smith needs to grab one before the Bengals return to the well in 2022. 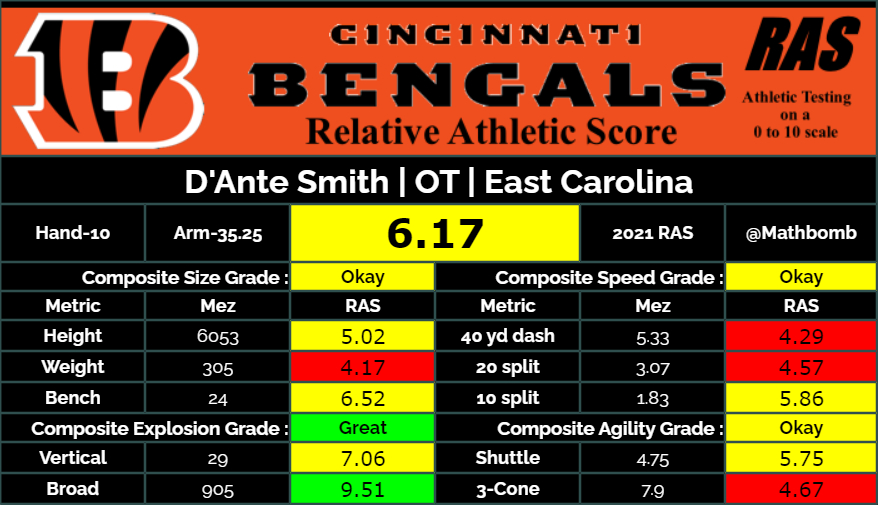 He will compete with last year’s sixth round selection Hakeem Adeniji for playing time. With the return of offensive line coach Frank Pollack, there is confidence that a future starter could be developed. At a minimum they will be hoping to mould a strong swing tackle from the pair.

D’Ante Smith faced lesser competition at ECU and it showed on tape. At times he was sloppy, getting by purely by being the bigger guy. What will have appealed to the Bengals is his size and movement ability, for a man of 6’5 Smith has rare feet. While he needs polishing up and won’t start immediately he is an intriguing prospect to keep an eye on.

It’s difficult to predict any UDFA to become a roster lock but the Bengals do have a couple of guys that stand a good shot. Many were surprised to see Pooka Williams available but his small stature likely had teams questioning his durability at the next level. His movement skills aren’t in doubt and his electric tools as a scat back will give him a chance to compete with sixth rounder Chris Evans.

Elsewhere, Drue Christman, the Ohio State punter was brought in to push Kevin Huber and cornerback Antonio Phillips was handed a 25k signing bonus to suggest he will receive a strong look during the pre-season. Pro Wells out of TCU has versatility to play full back or tight end but has an uphill task to displace newly acquired Thad Moss.

It was a bold draft by the Bengals. It was in line with the good vibes coming out of Cincy this offseason. The new uniforms and increased fan engagement, plus the enjoyable ‘Golla-DEY’ sideshow have instilled a new attitude. The selection of Ja’Marr Chase feels like a symbolic ‘swing for the fences’ move to show that Cincy is a different beast.

Whether it is judged a success will be dependent on a few factors. Will Chase hit the ground running in the NFL? Will Jackson Carman become a solid starting guard? Do the players the Bengals passed up on, like Sewell and Eichenberg, prove to have better careers?

While those question marks are rife at the top of the draft it isn’t hard to imagine the latter rounds being looked back on as fruitful. The Bengals added much needed depth with upside. Chris Evans and Cam Sample should get early snaps and Joseph Ossai could prove to be the steal of the whole draft.

END_OF_DOCUMENT_TOKEN_TO_BE_REPLACED
Get 20% off PFF ELITE and prepare to win in 2019!