The NFL Draft is over, and we cannot head into the three-month abyss that is the offseason without looking at what all 259 selections mean for each franchise. Whilst too early to judge just how successful a draft class each team’s was, we can look at how rookies fit within schemes, where they stand on depth charts, and who we can expect to make an impact in 2021. We continue our team by team series with the Dallas Cowboys:

For anyone who watched the Dallas Cowboys in 2020 it was obvious that their first-round draft pick would be on the defensive side of the ball. However most mock drafts expected one of the two elite CB’s (Surtain or Horn) to be available and be the pick, but the Panthers and Broncos did not allow that to happen. Due to this the Cowboys traded down and drafted Micah Parsons, the Linebacker from Penn State.

Whilst Parsons has obvious talent, I am not sure LB was the main area of need for the Cowboys – although given the news that Leighton Vander Esch’s 5th-year option was not picked up Parsons will fill that need and be a reasonably cheap option. Parsons did opt out of 2020 but this did not stop Jones from handing in the card, and neither did the character concerns that were raised throughout the process. The Cowboys will be hoping the maturity and productivity on the field comes quickly for Parsons.

Although defense was the priority, it did surprise me that given the way the draft fell that the Cowboys didn’t pick Rashawn Slater. I know I said earlier defense had to be the pick, but given the injuries on the offensive line and the pedigree of Slater, it is somewhat surprising they didn’t go best player available over the biggest need.

Day 2 was all defense all the way for the Cowboys as they continued to try and address their glaring 2020 weakness. At pick 44 the Cowboys looked to address cornerback by drafting Kelvin Joseph from Kentucky. Again, given some character concerns this could be seen as a gamble but I am sure the Cowboys loved the speed and ball skills and hope the maturity will come.

The next two picks – Odighizuwa and Golston – looked to bolster the defensive line; expect to see more play from Odighizuwa who was picked to try and shore up the terrible rush defense. Finally, it seems like the Cowboys allowed new DC Dan Quinn to get his prototypical CB in Nahshon Wright. At 6’4″ 183lbs Wright would be described as long and rangy – Dallas will be hoping he can have the same kind of impact that guys with similar measurables in the Legion of Boom had under Quinn back in his Seattle days…

The final day of the draft and the Cowboys continued to look defense while also starting to address the o-line concerns. On D the Cowboys picked Jabril Cox, Quinton Bohanna and Israel Mukamu, all of whom will be expected to carve out roles this season – and I expect Cox to have the biggest impact. On offense they took a chance with WR Simi Fehko who, given the depth at the position, likely has a camp battle on his hands:

“ Simi Fehoko is an ascending talent whose ideal blend of size and speed make him a handful for defenders. A little behind on his progression arc, Fehoko had a delayed career with the Cardinal after going on a two year Mormon mission to South Korea. This does show throughout his tape - he really hasn’t had enough snaps to master the finer nuances of the position such as route running, and earning separation is by far his biggest challenge. It seems like even he isn’t aware of the speed he possesses or how best to use it, but it’s definitely there - a yards per reception average of 23.6 as a sophomore (18.5 in his college career) shows just how dangerous he can be. Add to that the bristling physicality he brings, the positional versatility to line up as a big slot, the special teams bonus he likely offers, and you’ve got yourself a serious investment opportunity. The way he destroyed UCLA in his final game alone should raise some eyebrows. Fehoko has sleeper written all over him.”

With o-line picks Josh Ball and Matt Farniock Dallas will hope that they have players who will be able to be versatile and start right away. The Cowboys struggled to protect last season, mostly down to injury. So to get Ball to be a swing tackle and Farniock to help both inside and outside on the right of the line, the Cowboys will hope they have assisted in protecting Dak in 2021 and beyond.

One To Watch: Jabril Cox

Jabril Cox is the kind of LB you need in 2021. He is seen as an outstanding coverage linebacker who is fine in both zone and man schemes. Given the modern day offenses in the NFL he will be asked to cover Tight Ends, RB’s and slot receivers and based upon his athletic traits he should be able to deal with all three: 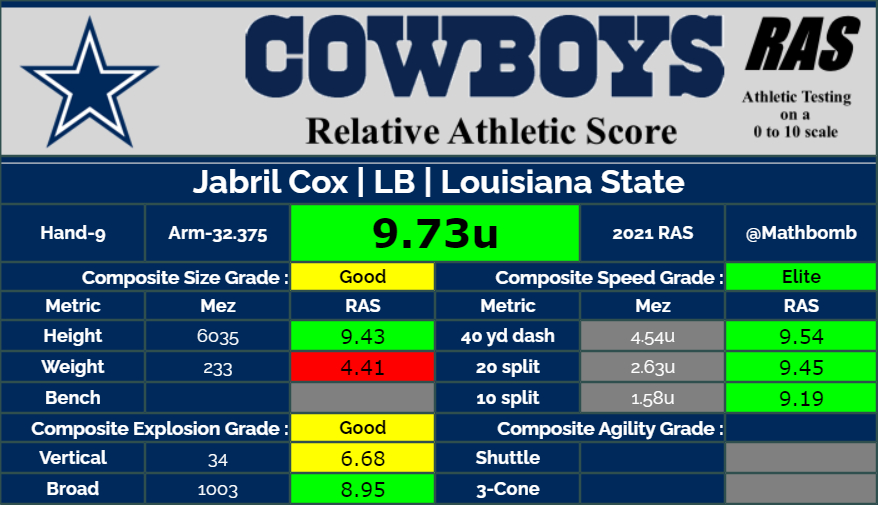 Obviously, he was drafted in the 4th round and this was due to concerns about the ability to stop the run and his play strength, but I believe the Cowboys may have an excellent player on their hands who can help them get off the field on those obvious passing downs.

It’s never easy to look at the UDFA’s and try and project starter potential or even what the teams are thinking but a couple of names that caught my eye for the Cowboys are Tyler Coyle and Braylon Jones. In Tyler Coyle the Cowboys have a safety who has many athletic traits that coaches love. He probably won’t start this season given the addition of Keanu Neal but as a special teamer and spot player, the Cowboys could have a chance to develop him into a starter. In Braylon Jones they have added depth at guard, who if develops will be able to use his size and length to benefit the Cowboys in the long term.

The Dallas Cowboys had to address defense and they have looked to do that. The draft didn’t fall perfectly early on, and this meant a couple of players with character concerns are now in the building and will need to be managed. However, if Parsons and Cox play as they can this could be seen as a very good draft for the Cowboys in the long term.

A former UKEndzone writer, Paul has been dragged out of an enforced retirement to give his thoughts on the NFL and anything else he can slide past the editorial team.

Paul is most famous (infamous?) as Mainz one half of the Waxing Lyrical podcast, alongside his Partner in Crime Neil ‘Dutts’ Dutton.

END_OF_DOCUMENT_TOKEN_TO_BE_REPLACED
Get 20% off PFF ELITE and prepare to win in 2019!