The NFL Draft is over, and we cannot head into the three-month abyss that is the offseason without looking at what all 259 selections mean for each franchise. Whilst too early to judge just how successful a draft class each team’s was, we can look at how rookies fit within schemes, where they stand on depth charts, and who we can expect to make an impact in 2021. We continue our team by team series with the Buffalo Bills:

The Buffalo Bills finished last season just one win away from a Super Bowl appearance. It has become apparent that the Chiefs are the team to beat in the AFC, but after being dismantled by Tampa Bay in the Super Bowl it appears there is now a formula to do so; make Patrick Mahomes uncomfortable. The Bills clearly saw a need to replicate that formula and took their first steps in doing so in the first round, with the selection of Miami’s Gregory Rousseau.

Like so many of this year’s prospects, Rousseau opted out due to the pandemic, but posting 16 sacks (2nd only to Chase Young) during the 2019 season assured the Bills he was worthy of a first round selection. Rousseau – who is 6’6 with long arms – has an ideal build as an NFL edge rusher, but oddly found more success as an interior rusher despite limited snaps. This presents a good problem for the Bills, who according to PFF were already the 7th best at rushing the passer in 2020. Defensive end is currently a crowded position for the Bills, who have vets Jerry Hughes and Mario Addison listed as starters in addition to 2020 and 2021 2nd round picks AJ Epenesa and Carlos Basham Jr. and free agent Efe Obada, who finished with over 5 sacks last season in Carolina. With only so many snaps to go around, Rousseau could find himself paired inside on third downs with former first rounder Ed Oliver to create quite the tandem.

Many believed that Carlos Basham Jr. out of Wake Forest would be a first round selection, but after falling to the 61st pick Buffalo couldn’t resist taking him. Basham had quite the career at Wake Forest, starting for the last 3 seasons and finishing with over 20 sacks.  Basham hardly left the field in 2020, representing one of the truest forms of a 3-down lineman from this class. His game relies heavily on his power; with some improved technique he should be able to make an impact as a rookie.

Buffalo’s selection of Spencer Brown in the third round is certainly one of the most intriguing picks of the draft. Brown had one of the best pro days, not only  inthis year’s class, but over the last decade.  That being said, Brown is certainly far from a sure thing. After not playing in 2020 due to COVID, Brown had limited film for scouts, only being a full time starter in 2019 and filling in for 5 games in 2018. Brown also played for Northern Iowa, a smaller college program, and has yet to face elite pass rushers on a consistent basis. With so much upside Buffalo likely views Brown as a long-term investment.

Buffalo started day 3 by adding another tackle, Tommy Doyle out of Miami (OH). Doyle has great size for a tackle (6’8 326lbs) in addition to plenty ofexperience as a 4-year starter. Doyle did have to fight the injury bug his first 2 seasons, missing over 15 games, but after a strong 2019 season expectations were high in 2020. Unfortunately Doyle was limited to 3 games last season due to COVID. What is apparent was Doyle’s ability as a pass blocker; according to PFF he graded out above an 80 the last 3 seasons. Doyle also has great discipline for a lineman, picking up just 9 penalties through over 1800 snaps.  Doyle – like Spencer Brown – will likely not find the field until after his rookie season. You can read my colleague Oliver Hodgkinson’s pre-draft interview with Doyle here:

It took until the sixth round, but Buffalo eventually picked up a new target for Josh Allen in Houston wideout Marquez Stevenson. Even though Stevenson ran a 4.4 second 40 yard time at his pro day, his consistent ability to take short routes the distance should have fans expecting even better football speed. Lacking size Stevenson lined up primarily in the slot in college, but will have a great mentor in Cole Beasley. Unlikely to have a consistent role on offense, Stevenson also adds value as a returner.

Nine picks after Stevenson, Buffalo made their first addition to the secondary by taking Pitt safety Damar Hamlin. This very well end up being the best player in Buffalo’s draft class; Hamlin possesses many elite traits that should translate to the next level. Hamlin is without question one of the hardest hitters from this draft, but also has great vision and quickness. Hamlin’s best ability might be his versatility; with a solid 6’1 frame he played significant snaps in the box, as a deep safety and as a nickel.  Already listed as a second stringer, Hamlin very easily could find the field as a third safety in Sean McDermott’s defense.

“After putting on a show at the Senior Bowl, Damar Hamlin is a buzz name on NFL Draft Twitter. Those that deign to put on his game tape will find a very accomplished, all-round safety who didn’t seem out of his depth with any responsibility given to him at Pitt. He’s currently considered a day three pick, and that to me screams value; grabbing a rotational piece for your secondary who is capable of stepping into a number of roles is a valuable tool to have as a defensive coordinator, and when you couple that with his work ethic Hamlin will not let you down. Finding a home that utilises split zone coverage will be ideal for his skillset.”

Buffalo made another addition to their secondary with the selection of Rachad Wildgoose. Wildgoose flipped between nickel and outside corner over the last 3 seasons, but only showed flashes of great play. Undoubtedly a burner, Wildgoose’s poor tackling and limited man coverage experience were his biggest deterrents. The Bills who have one of the weaker corner units is hoping Wildgoose can turn a corner and become a playmaker.

With their last selection the Bills took Texas Tech guard Jack Anderson. Anderson was a 4 year starter and had his best season in 2020, finishing with a PFF grade of 78.8, which put him among the top 20 of all guards. Coming from Texas Tech’s air raid offense it would be easy to assume Anderson is a much more polished pass blocker, but he played just as a good if not even better as a run blocker. Despite these accolades Anderson needs serious improvement with his footwork, and very well might run into problems with his shorter wingspan despite being 6’5. Currently buried on the depth chart. Anderson will need to have an impressive offseason to compete for a roster spot.

One To Watch: Spencer Brown 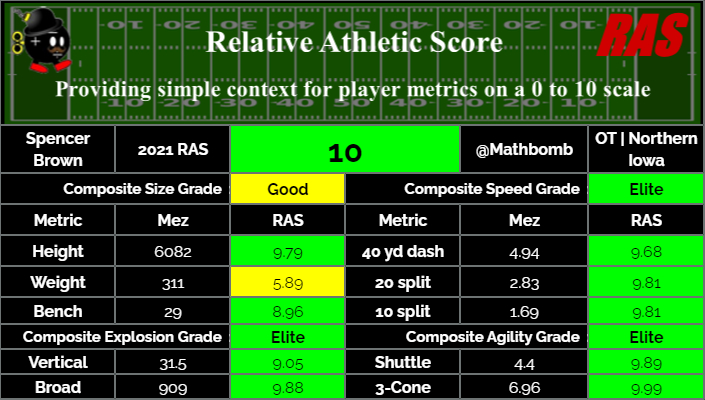 As mentioned before, Spencer Brown is one of the best athletes in this class. Looking strictly at his RAS score and chart below you can see he showcased elite testing in virtually every category except his weight – and even then you could argue that is a plus for his mobility. Brown would clearly be a first rounder if his play matched his test score, but his college tape was good, not great. The Buffalo coaching staff, o-line coach Bobby Johnson in particular, will have a tremendous task in front of him that could ultimately reap great rewards. It will almost certainly take time, but if his potential is met Spencer Brown could be the steal of the draft.

Buffalo clearly felt a need to make additions to their skill positions when choosing which UDFA’s to sign. Most notably they signed USC corner Olaijah Griffin. Griffin, the son of rap Legend Warren G, was widely expected to be drafted, but after not hearing his name called thought it would be best to sign with a contender who was in desperate need of improvement at the corner position. Griffin had a very subpar pro day, which could be a big reason why he wasn’t selected, but if his play can translate he not only should make the roster but should also compete for playing time.

The Buffalo Bills are at a pivotal point in their progression; can they make the jump from being a very good team to a great team? Already in a great position with an elite QB on a rookie contract makes this draft all the more important.

Despite cornerback being a primary need the Bills decided to use their first two days to improve their offensive and defensive lines, leaving many to wonder how that would immediately improve their team. By bolstering the skill positions on day 3 and through undrafted rookies some doubters were put to ease, but there remains speculation about whether the right picks were made…

Buffalo also relied heavily on Josh Allen to not only throw but also run the ball, making the lack of new running back somewhat puzzling, especially considering the recent success of backs drafted in later rounds. Fans should have some optimism that at least one of their selections will turn out to be a diamond in the rough, given the recent successes Brandon Beane and Sean McDermott have brought to the franchise. A player like Damar Hamlin is a perfect example of filling a need while also adding depth; he not only will serve as a safety but due to his size and vision could find himself playing backer on run downs or possibly in the slot.

Like every draft we will not know the true outcome for some time, but if this rabid fan base adheres to recency bias then they should be confident the future is only getting brighter at Orchard Park.

A FORMER COLLEGIATE WIDE RECEIVER AND CURRENT TEXAN, TRES IS THE NEWEST MEMBER OF THE TOUCHDOWN. IN ADDITION TO WRITING FOR THE TOUCHDOWN, TRES ALSO WORKSAS AN NCAA ANALYST FOR PRO FOOTBALL FOCUS.

2021-06-21
Previous Post: The Collapsing Pocket Podcast #233: The Whiff Of Dubiousness
Next Post: FORKS UP: A Conversation with Arizona State Offensive Co-Ordinator Zak Hill

END_OF_DOCUMENT_TOKEN_TO_BE_REPLACED
Get 20% off PFF ELITE and prepare to win in 2019!