The University of Southern California and The University of California-Los Angeles sent shockwaves through College Football on Thursday with the news of their impending defection from the PAC-12 to the Big Ten. Simon Carroll  looks at the reasons why, and what it means for football on Saturdays as we know it:

Conference realignment isn’t something new in collegiate sports. Football programs up and down the United States have changed allegiances as and when it has suited, but in the past decade the hunt for greater revenue has seen more movement than ever before.

The Big East Conference was literally abandoned in 2013, the final effect of the big realignment of 2010-2014. In total, 49 schools at the FBS level found new homes, a seismic shift in the college football landscape. In an ironic contradiction to their names – which they kept by the way – The Big Ten now had fourteen members, the Big 12 just ten. Huge rivalries were lost, with Texas and Texas A&M no longer in the same conference. And perhaps for the first time we began to see less of a focus on geography as a requirement to conference entry; West Virginia’s closest new neighbour was more than 860 miles away, the best example in one of the newly christened ‘Power 5’ conferences that money had become the priority.

Last offseason, the volume of conference realignment was well and truly turned up to eleven. Oklahoma & Texas, the beating heart of the Big 12, officially requested membership in the SEC. Within ten days, they were accepted – For a long while, the SEC had prioritised new entries to just one market per state, but adding two powerhouse programs in OU and UT proved too hard to resist. The Longhorns and Sooners are scheduled to move into their new home in 2025, but don’t be surprised if the timeline is accelerated.

I predicted the end of the Big 12 in this article here, but they seemed to have clung on, adding four more schools to their ranks (UCF, BYU, Houston and Cincinnati). This cleaned out the AAC, who in turn began pilfering the other Group of Five conferences. All in all, eighteen schools moved – just off the back of two defections from the Big 12. But as much as these smaller FBS programs were disrupted, it was the tremors of further powerhouses upping sticks that gave conference commissioners sleepless nights…

On Thursday, reports began emanating from reliable sources that USC and UCLA – two of the biggest programs in college football and members of the PAC-12 (or iterations of the conference) since the 1920’s, were in conversations to join the Big Ten. Just fifteen years ago this would have been considered ridiculous, yet within the hour the news had been confirmed; a conference rooted in the MidWest would be integrating two teams from the West Coast into their fraternity. What has spurred this college football arms race?

In one word, relevancy.

The news that the SEC were increasing to sixteen members in 2025 was a clear marker that the upper echelons of College Football were in flux; The conferences that make up the ‘Power 5’ have traditionally had the biggest schools, the biggest games, the biggest rivalries, and inevitably, the biggest TV rights. Not only that, but each year their conference champions would have a good shot at reaching the College Football Playoffs, almost a closed shop to the rest of the FBS. With one of them supersizing it felt inevitable that the rest of the pack would follow – suddenly having sixteen prestigious members was the aim.

This won’t happen overnight, but there is an urgency here. Essentially, there aren’t eighty programs big enough to fill five conferences with sixteen teams. The Power 5 is dangerously close to becoming the Power 4, and when the music stops one of these conferences is going to be left holding their jockstraps.

With the SEC and Big Ten probably untouchable, there is the feeling of vulnerability amongst the other three conferences. The Big 12 was wounded last offseason yet managed to survive – for now. But for the PAC-12, the conference that has to compete with disadvantageous time zones as it is, it’s hard to imagine them overcoming a blow as big as losing the crown jewels of their family.

It’s just a thirty minute drive from The University of Southern California to The University of California, Los Angeles. Between them, the two schools have won the PAC-12 Conference fifty-six times – USC on thirty-nine occasions, UCLA seventeen. They share eight Heisman Winners (including Reggie Bush), and twelve National Championships. Despite the notoriously fickle fanbase for each program in the state, these are two schools with elite pedigree when it comes to football.

Despite barren runs in recent history, both programs have produced iconic moments that college football will never forget. For USC, there’s the ‘Bush Push’ to win the game against fierce rivals Notre Dame in 2005, or the greatest National Championship game in history against Texas, albeit ending up on the losing side. For UCLA, there’s the two momentous Rose Bowl wins in ‘66 and ‘76 – both against heavily favoured opponents, and the 25-22 Thanksgiving game of 1975 against their cross-town rivals. The Bruins & Trojans aren’t the be all and end all of the PAC-12, but they give the conference history, credence, and most importantly a presence in one of America’s biggest markets.

Despite history holding less weight in American culture than in the UK, there’s no doubt that the decision to leave the conference they have represented for 100 years would have been a difficult one. Envisioning West Coast football without UCLA and USC is, quite frankly, impossible. And yet this is where college football finds itself, and there’s only one factor to blame. 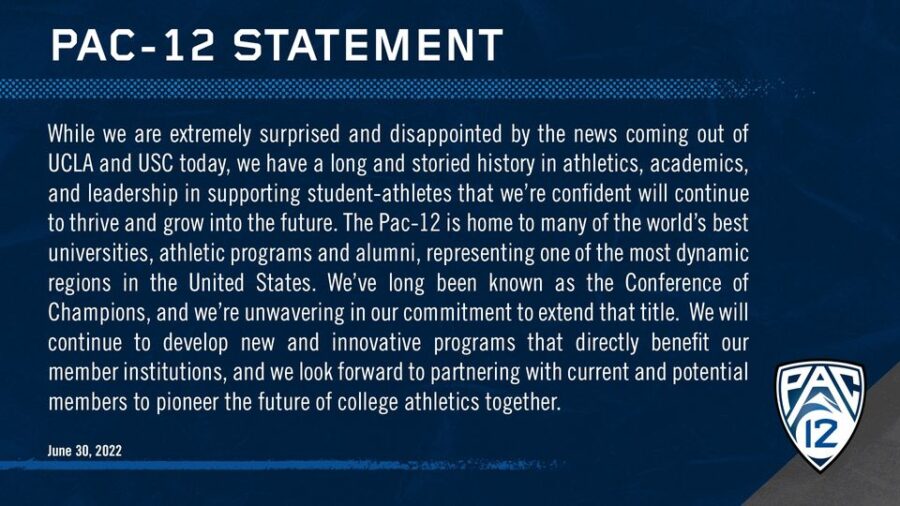 Money talks. Things looked a lot rosier for the PAC-12 back in 2011. Having just signed a 12 year, $3bn contract with ESPN for the rights to broadcast their football, the deal was considered a huge success. Not only was it the largest TV deal in college football history, but it also gave the conference the rights to have their own privately owned network. Since then, national interest in a league whose action finishes in the early hours of the morning for a huge slice of the country has waned, and the once celebrated private networks struggled to find local partners to work with. The PAC-12 has been slipping down the totem pole of the Power 5 rankings ever since, despite their schools earning more per year than those in the ACC. Exposure is key, and in that regard, the PAC-12 will always face an uphill battle.

Looking to negotiate a new TV deal later this year, the timing of USC & UCLA’s defection could not be worse. Sure, the conference still has some big names – Oregon, Utah, Washington and Stanford have all been relevant in recent seasons. But even suggesting they bring the kudos to the negotiating table that the LA brothers delivered would be laughable. Commissioner George Kliavkoff was once lauded for his money making skills – now he’s being accused of sleeping at the wheel, failing to see the vultures circling as the PAC-12 became more and more vulnerable.

Where this long-standing conference turns to next is anyone’s guess. Do they flex their muscles and try and tempt Oklahoma State away from the Big 12? Do they look to the cream of the Mountain West, perhaps Boise State? Or do they batten down the hatches and consolidate as a ten-team conference, returning to their PAC-10 moniker prior to 2014? It’s fair to wonder how the bigger programs left in the conference, particularly the University of Oregon, will react to the news. If USC and UCLA can leave the PAC-12, then no team is above realignment. And nobody wants to be on the outside looking in when it comes to finding a home that gives them the riches needed to recruit, and the pathway to a shot at a National Championship.

Realignment Far From Over

For The Bruins and Trojans, these two factors were ultimately the catalyst for change. The Big Ten may play second fiddle to the SEC, but the conference is as strong as it ever was. This takes their numbers up to sixteen – well positioned to challenge their Southeastern colleagues as a super power in the next few years. The exposure the schools will get from playing in primetime windows rather than late night slots will help them attract the nation’s best talent to California. And if – IF – the College Football Playoff ever expands to twelve teams, both programs will consider themselves in a better position to make their case for a spot off the back of a good season.

For the college football purist, this eyebrow-raising defection is further evidence that the soul of the game is being sacrificed in the pursuit of money and power. But for athletic departments who have a duty to offer their student athletes the greatest possibility of success, it really is inevitable. The only question now is which of the other Power 5 conferences will survive, and in what guise? With many more questions than answers still remaining, this realignment merry-go-round is far from slowing down.

Twitter Envelope Linkedin Spotify Apple
 5/5
2022-07-02
Previous Post: A Pathway To The NFL: Why Grassroots Development Bodes Well For The Future Of Football In The UK
Next Post: The Manning College Football Dynasty: Part 2 – Peyton

END_OF_DOCUMENT_TOKEN_TO_BE_REPLACED
Get 20% off PFF ELITE and prepare to win in 2019!