The difference was a blade of grass.

After hours of football at The NFL UK Flag Youth Championships, two schools were left standing. St. Mary’s Hall of Stonyhurst, Lancashire lined up opposite Little Ealing Primary of West London. With nothing separating the ‘Vikings’ and the ‘Seahawks’ following a 6-6 end of regulation, sudden death overtime ensued.

Failing with their first attempt, The St. Mary’s Vikings intercepted Little Ealing’s pass and returned it the length of the field, securing victory to rapturous applause. But amidst the celebrations the play was blown dead – the outside of a ten year old’s cleat deemed to have touched the yellow sideline on his glorious return. The Little Ealing Seahawks took full advantage of their second chance, stealing a narrow win and lifting the trophy. But despite the dramatic finale, the success of this tournament goes far beyond the action on the field…

Flag Football: Coming To A School Near You

St Mary’s and Little Ealing are just two of more than 300 primary schools in the UK now playing flag football – the non-contact version of the sport. In total this season more than 20,000 children participated in flag football, with the NFL providing free training and equipment to any school who wished to take part. Following on from the success of the NFL Academy, it’s the latest initiative from the league to encourage grass root development of the game in the UK.

Loughborough University is not a particularly easy place to get to. But upon arrival, you can immediately see why NFLUK have decided to make it their home; the facilities provided by one of the country’s most prestigious seats of sporting education are as good as you could possibly hope for. It’s further evidence that the league is not content to rest on their laurels when it comes to driving engagement overseas – filling stadiums with fans who already have the NFL bug is one thing, but sustaining the interest for future generations is now the goal.

For the boys and girls competing on Wednesday (53% of youth participants in UK flag football are female, with every team attending having mixed rosters), the growth of the sport in this country may present a lot more than just an early education into football and the multitude of reasons why we all love it so much. There is now a tangible route to participation, that may begin on a flag football team in years 5 and 6, but no longer has a limit to how far you can go.

A Pathway To The NFL

Efe Obada knows first hand that the route to the NFL – for anyone born and raised outside of the USA – has traditionally been a tough one. Born in Nigeria, raised in the Netherlands, Obada and his sister were trafficked to London when he was just ten years old. Obada learnt about adversity from an early age, being homeless in London before living in ten different foster homes. His rise in football came via playing for the London Warriors, and following a recommendation from a coach, was signed by the Dallas Cowboys as a free agent in 2015.

In just over one year Obada was signed and released by the Cowboys, Chiefs and Falcons. The NFL is a demanding and impatient league, with limited scope to develop raw talent. Efe finally got his big break at the Carolina Panthers, who took the opportunity of signing Obada via the new International Player Pathway program, giving teams an extra practice squad spot for overseas players. It allowed Obada to hone his talent and become a bonafide NFL star. 62 tackles, 11 sacks and an interception later, and with stops in Buffalo and now Washington on his resume, the thirty year old has earned his place in the league the hard way.

Talking to Efe at the event, he’s excited to play for Ron Rivera again, and tells me the upcoming 2022 season is his time. But considering the lack of structure for the game when he first started playing, he’s already far exceeded expectations. The poster child for the NFL UK is now part of a league-wide drive to open up international routes to the NFL, and allow hard work and talent to dictate success.

Efe Obada was one of numerous NFL players in attendance for the UK Flag Youth Championships on Wednesday. Fellow NFL Brits Dayo Odeleye (Texans) and Jamie Gillan (Giants) joined him, alongside Vikings receiver KJ Osborn and a cameo appearance from Broncos QB Russell Wilson. Led by former DB and BBC & Sky Sports pundit Jason Bell, all the celebrity guests were engaging with the youth teams, cheering them on from the sidelines and coaching them up between games. Osborn in particular was a parents’ favourite, posing for photographs and signing autographs at every opportunity. The goal on the day was to give these pupils a moment to remember. Long term, it can be the catalyst for much more.

Perhaps Dayo Odeleye is a more fitting champion for what the NFL is trying to achieve on these shores. A graduate of the NFL Academy, set up in 2019 to nurture ambitious young adults and turn UK football into an education, Odeleye has been able to develop his talent – going on to be named as part of the International Pathway Program (IPP) and now plying his trade in Houston. With a defined route to the NFL finally becoming apparent, it’s more success stories like this that the NFL is trying to create. For Dayo that dream may have started as a teenager – the next step is to develop interest, participation, and potential even younger.

Between team duties, Obada was genuinely excited about what the future now holds for the sport in this country:

“It’s amazing. I’m inspired. This wasn’t a thing for me. And the fact that it is a thing now and these kids are getting exposed to the sport that I love and has changed my life, and to envision what it can do for them if they follow through and take advantage of some of the initiatives that we’re creating, it really is inspiring.”

“You’ve got this, you’ve got it in school now, you’ve got the NFL Academy, the IPP, it’s a pathway for them to get to the NFL – just get out there and give it a go. And the league is taking this seriously. You’ve got KJ (Osborne) here. Russell Wilson is here man! This, on top of Wembley games, Tottenham games. What more can you ask for.”

"The Next Generation Of Fans AND Players" 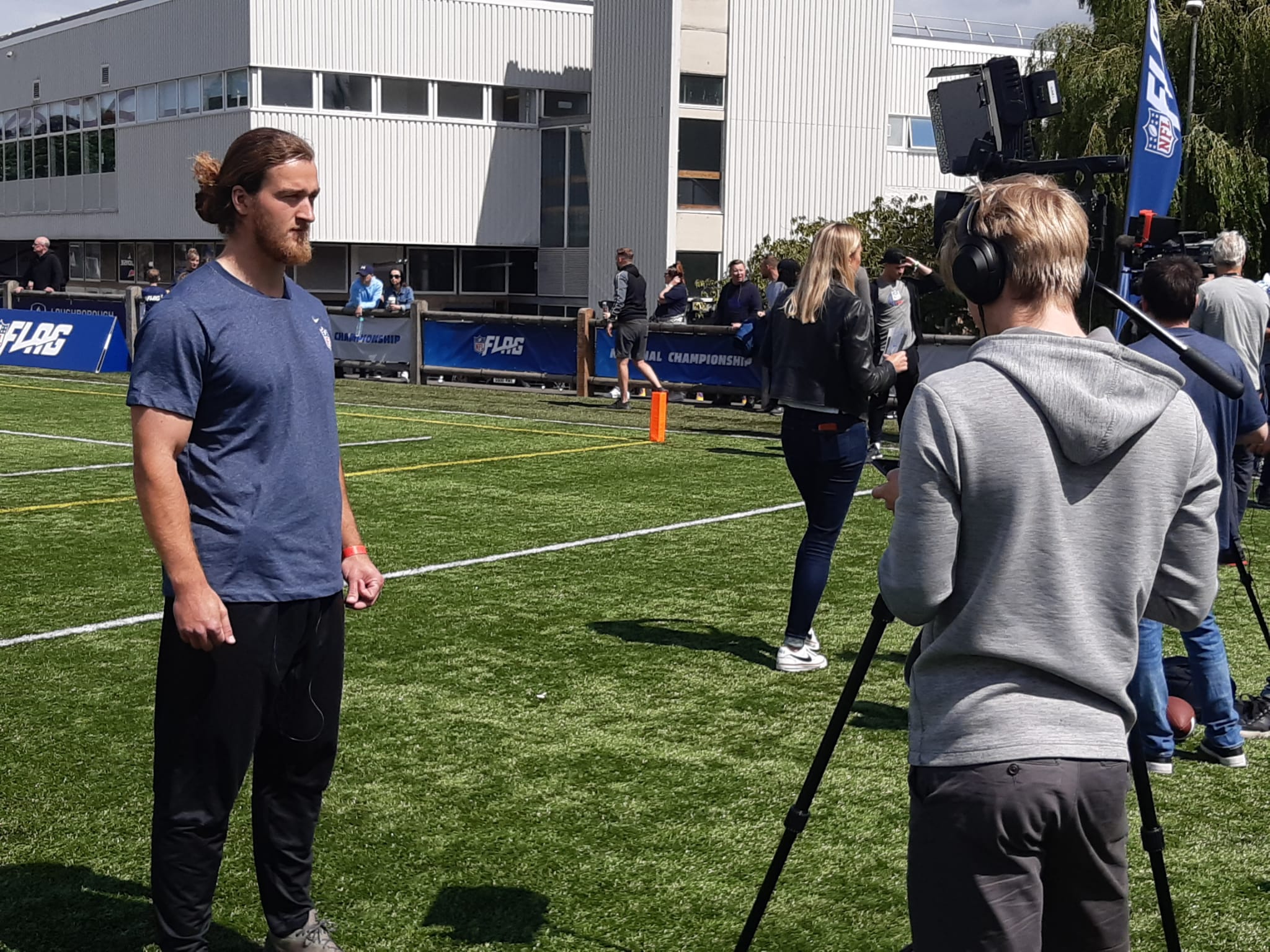 When it comes to growing the game, the NFL means business. The team they have built this side of the pond is packed full of talented people and difference makers, all working towards that common goal of educating and showcasing football to more people. A perfect example of this was the prize that was up for grabs – not only were Little Ealing awarded a huge trophy, they’ll also be travelling to Las Vegas next year to attend the Pro Bowl, where they will compete in an international flag youth tournament. Dreams were literally coming true at Loughborough University on Wednesday.

For NFL UK General Manager Henry Hodgson, it was a moment to savour; speaking to Sky Sports he talked about this being ‘the next generation of fans AND players’. Vikings receiver KJ Osborn was genuinely impressed with the quality of play and the setup. And Giants punter Jamie Gillan envisaged more English (and Scottish) accents in the league in years to come. The difference in ambition is real – the UK is no longer happy with one or two Efe Obada’s.

The NFL continues to explore new markets and develop across the world. Germany gets its first International Series game later this year. And two weeks ago saw the launch of the first ever football camp in Africa. But if you think they’ve even remotely exhausted all the opportunities here, then you don’t know the NFL. This feels like the tip of the iceberg. With the Academy going from strength to strength, the floodgates could well be about to open.

A blade of grass was the difference that crowned The Little Ealing Seahawks as champions. But every exhausted child, every proud parent, and every dedicated employee were all winners. American Football, once the sole property of the few in the UK, is no longer niche. Momentum is building.

END_OF_DOCUMENT_TOKEN_TO_BE_REPLACED
Get 20% off PFF ELITE and prepare to win in 2019!