From Extinction To The ACC: The Bill Clark Blazer Legacy

From Extinction To The AAC: The Bill Clark Blazer Legacy

Not many coaches have the impact on a football program like Bill Clark did the last seven seasons in Birmingham. After his recent retirement, Simon Carroll looks at the career of a man many deem responsible for saving UAB football: 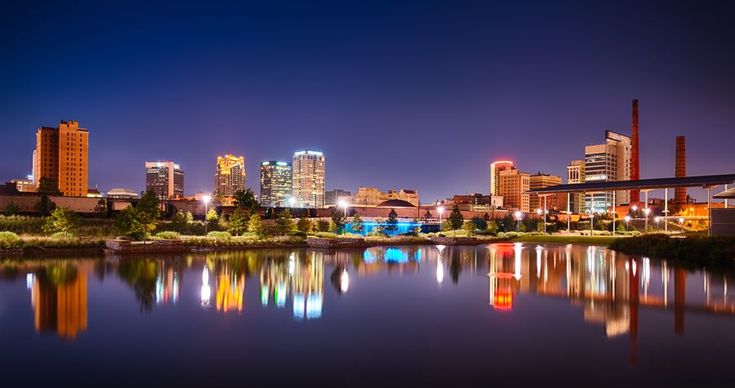 Birmingham, Alabama is a football hotbed. The biggest city in the Yellowhammer state has been called home by some of the biggest names in the game, such as Karlos Dansby, Marcell Dareus, Mario Addison, Bobby Bowden, and of course Bo Jackson. The SEC, College Football’s most powerful, most competitive and most lucrative conference, is headquartered here. And Paul Finebaum, one of college football’s most preeminent voices, established his radio career based in the city. Safe to say, football runs in the blood in Birmingham.

Yet walk around the famous theatre district of the city, or stroll across the beautiful Railroad Park that offers a glorious contrast to Birmingham’s industrial backdrop, and everywhere you look you will find the crimson and white of Alabama or the navy and orange of Auburn. They call it a joke that a Birmingham baby must pick from the day he is born between The Tide and The Tigers – trust me, football is no joke anywhere in the Southeast. Surprising as it may be, a city with a population of 200,000 people isn’t just lacking a professional football team – it has no professional sports franchise of any kind. That makes College Football king. But despite the affinity for the sport on Saturdays, the story of their own collegiate program has been a far cry from that of their illustrious neighbours…

The Birth Of The Blazers 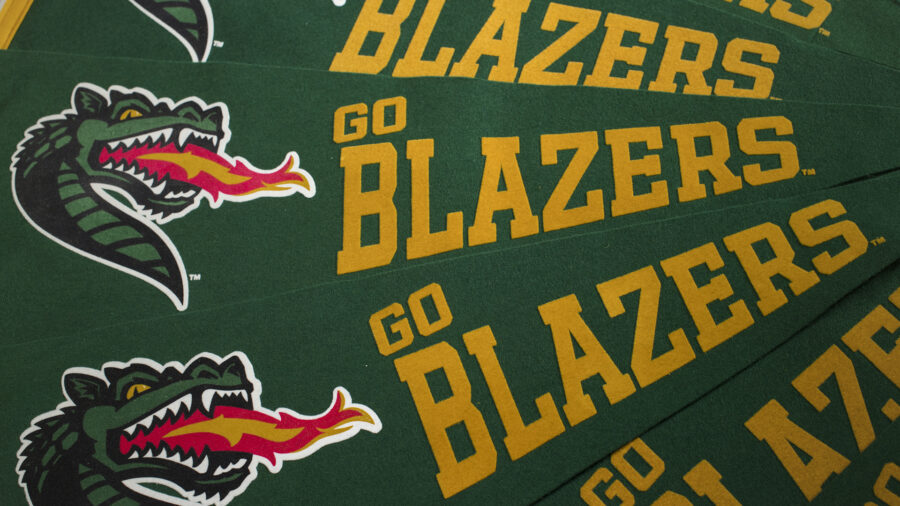 The University of Alabama at Birmingham was officially established in 1966, but the world-famous Medical College it originated from (and is still at the forefront of medical education today) has existed for more than 160 years. Sport came to the university in 1977, when their first ever athletic director Gene Bartow was hired – and after a campus vote bestowed the ‘Blazers’ nickname to all their teams, hoping they would “blaze a new trail in college athletics”.

Football followed in 1991. The Blazers began life as independents, firstly at the DIII level but quickly rising through the ranks – finally joining the FBS and the Conference-USA in 1999. Life at the highest level of collegiate football hasn’t been kind to UAB, with just four winning seasons and a win-loss record of 72-116 in the sixteen years up to the end of the 2014 season. For context, Alabama won 127 games in that time period and Auburn 134 – in a much more competitive conference. They also won four National Championships between them. The bigger history and traditions of the SEC programs aside, it’s clear that performance was also unhelpful in establishing local love for the Blazers.

In the early 2010’s UAB were struggling to finance their athletic department. A yearly operating budget of $30m was far from self-sustaining; the school pumped in more than 65% of that money from other sources. Football was considered the biggest culprit, and even with this propped up budget, the department as a whole was operating at a loss. During the 2014 season, the university’s president Ray Watts ordered a consulting firm (CarrSports) to analyse the state of the football program within the school’s athletic portfolio. The results were not easy on the eye.

CarrSports projected an operating shortfall of more than $5m for the next season – but argued that without the football program, the department would run at a $400,000 surplus. It also suggested that, to remain competitive in the C-USA, UAB would have to invest an additional $47.5m over the next five years. With the football facilities also in line for a $22m overhaul in the near future, it’s fair to say the consulting firm did not paint a pretty picture of the future of Blazer sports. In early December of that year Watts ordered the shutdown of the football program at the end of the 2014 season – the first FBS school to do so since Pacific in 1995. UAB football was dead.

Many Blazer fans believed there to be an ulterior motive behind the demise of their football program. Paul Bryant – the son of legendary Alabama head coach Bear Bryant – was a board member at UAB, and was considered to be the orchestrator of the move that stemmed from a long standing feud with Gene Bartow, the man who brought athletics to Birmingham. Nevertheless, Blazer football was gone, despite the hiring of a young and exciting head coach less than twelve months earlier – who in one season had made UAB bowl eligible, something they hadn’t achieved in more than a decade…

Bill Clark was born in Anniston, Alabama – about an hour east of Birmingham. At the age of 22 he began his coaching career as an assistant coach, with stops at four different Alabama/Georgia high schools in eight years. Clark got his first head coaching role at Prattville High, where he became a legend over the next nine seasons – accumulating a record of 106-11 and winning back to back state championships in 2006 and 2007. His coaching acumen did not go unnoticed, and he secured his first foray into college football, being named the defensive coordinator for South Alabama in 2008. More success followed, with The Jaguars enjoying two undefeated seasons in his time there; the growth of the program saw them make the step up to the FBS level, joining the Sun Belt Conference in Clark’s final season with the team.

One year as the head coach of Jacksonville State followed, where Clark led the school to their first playoff victory in their history, as well as setting forty-nine school records, thirteen Ohio Valley Conference records, and three NCAA records. In January 2014, UAB announced that they had hired Clark to become the fifth head coach in their history, following the resignation of Garrick McGee.

Clark orchestrated an immediate turnaround in Birmingham. In 2014 The Blazers finished 6-6, their best record since 2004. This record also included a one-score defeat to #18 ranked Marshall and a commendable 34-47 loss on the road at SEC powerhouse Mississippi State. Despite the success on the field, the financial pantomime off it saw the storm clouds gathering, and just three days after their final game victory over Southern Miss, Watts and the board of trustees wielded the axe. Less than twelve months after being hired, Bill Clark was left without a football team to coach.

Considering the resume that Clark had built in his twenty-five years of coaching, he could quite simply have found another job elsewhere. Fourteen FBS programs were looking for a new leader that year, and he would not have looked out of place on most of the shortlists. But Clark didn’t look for a fresh start. Instead, he spearheaded the groundswell for football to be reinstated at the University of Alabama at Birmingham.

The UAB campus is less than an hour away from Tuscaloosa. Disgruntled Blazer fans, convinced Paul Bryant was behind the demise of their football program, believed that at the heart of the decision to curtail the sport from their athletic portfolio was the idea that only one team should be dominant in the city of Birmingham, and that was the Crimson Tide. Determined to prove there was a demand for their own collegiate program, marches and protests were organised,and the ‘UAB Football Foundation’ was formed. $15m in donations was raised, and external sources pledged more than $17m to the reinstatement of football. At the forefront of this fundraising was Clark, who instead of assessing his options, chose to sit out the year. Ultimately, he realised his heart was in Birmingham.

Less than six months later, Watts announced that Blazer football would return – in 2017. Clark and the UAB faithful had succeeded in financing a football program – something a consulting firm said would not be possible. More than that, they could afford new facilities, including refreshed locker rooms and a new turf field. But for the loyal head coach, the hard work had only just begun; despite the majority of his players wanting to stay and join the fight, Clark ordered them to find new homes rather than risk their football careers. Thirty or so defied orders, retaining hope of playing for their coach one more time, but a two year hiatus would mean Clark was on the clock to flesh out his roster and hire a new coaching team. Unsurprisingly, it did not daunt him.

On the 2nd September 2017, The UAB Blazers took the field for the first time in thirty-three months. Bill Clark ran out like a proud father in front of his army of loyal Blazers, and proceeded to watch them dismantle Alabama A&M 38-7. Despite an unprecedented amount of personnel changes, and a supporting cast that included brand new offensive and defensive coordinators, UAB recorded their best season since they joined the Conference-USA. A year later, the Blazers were crowned conference champions, and won the first bowl game in school history. Another C-USA Championship followed in 2020. And by 2021, the football program was so self-sufficient that the Blazers moved in to the brand new Protective Stadium – a 47,000 capacity, purpose-built home for a program that just five years earlier didn’t exist. Both on and off the field, UAB football was a success – and at the heart of that remarkable turnaround was Bill Clark.

Sometimes, life can be cruel. Last Friday, Bill Clark announced he would be stepping down from his role as UAB head coach and retiring from football at just 53 years old, a long-standing back issue becoming so debilitating he felt he was no longer able to do the job he was born to do. Requiring a spinal fusion, Clark will step away from the program he not only helped save, but developed into a Group of Five powerhouse:

Clark leaves UAB in a position that is the envy of many other FBS football programs. His highly rated offensive coordinator Bryant Vincent ascends to the head coaching role after setting school and conference records in almost every category the last three seasons, hopefully ensuring consistency and stability. The Blazers have become a destination for recruits, a popular landing spot for those who want to be at the heart of Southeastern football but overlooked by the SEC powerhouses. Off the field, the athletics department is as secure as it has been since it’s foundation. And the prestige of the football program has risen to such heights that, when the American Athletic Conference lost three of its members to the Big 12 in the latest round of conference realignment, The Blazers were headhunted to join the most successful Group of Five conference of the last decade.

Clark won’t be around to see the team move to the AAC – they’re scheduled to make the switch ahead of the 2023 season. But it’s hard to imagine this football team being in this position without his influence on the program. Humble, hard working, and beloved by his players – what Clark did for UAB cannot be understated. A remarkable coaching career that spent it’s greatest years almost equidistant between the bright lights of Bryant-Denny and Jordan-Hare was probably not given the credit it was ultimately due, and certainly ends too early. But Birmingham knows. And Birmingham will never forget.

Congratulations to Bill Clark on his retirement. The University of Alabama at Birmingham will forever be in his debt.

END_OF_DOCUMENT_TOKEN_TO_BE_REPLACED
Get 20% off PFF ELITE and prepare to win in 2019!