If you are a fan of the NFL Draft then you are probably familiar with the NFL.com podcast ‘Move The Sticks’. Analysts Daniel Jeremiah and Bucky Brooks often use the term ‘cluster buster’ to describe how to split a group of players you have similarly graded.

In this series, we will take players at the same position, sometimes with similar play styles and try to split them. We will look at four seperate areas key to their position and see who comes out on top.

By the time you read this the College Football season may have been shelved. However, draft analysis goes on and we have three cornerbacks to split. This week we look at Patrick Surtain II, Caleb Farley and Shaun Wade. 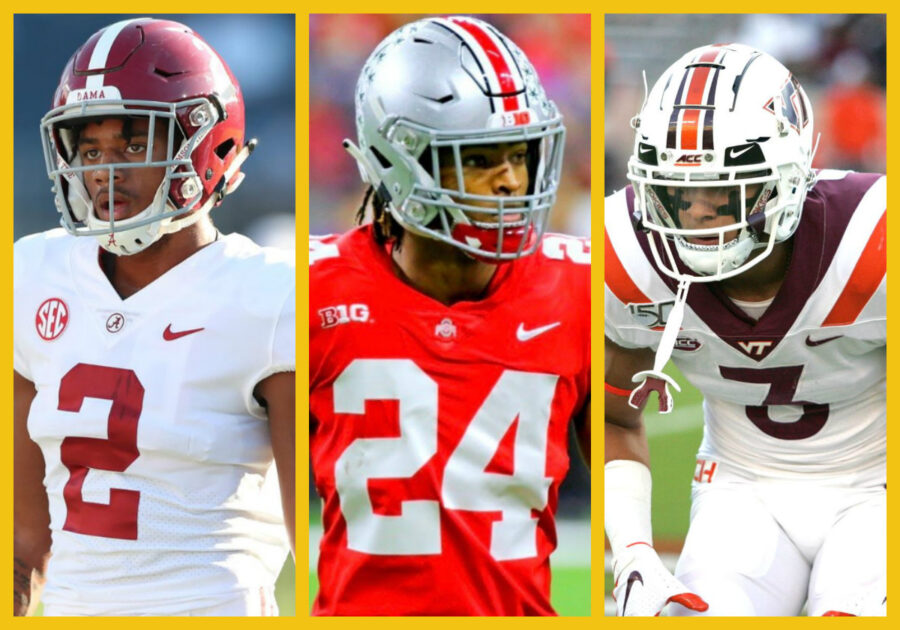 Alabama’s Patrick Surtain II might not jump off the tape in certain aspects but he leads the pack when it comes to technique. It’s no surprise that the son of a former NFL cornerback, has inherited the technical abilities key to the position. His ability to mirror receivers’ movements is excellent. Surtain shows great hip fluidity, meaning he is difficult to shake off in coverage. Learning under the master of secondary coaching Nick Saban has allowed Surtain to become a true shutdown corner even after only two seasons in Tuscaloosa.

Both Farley and Wade are a little less refined in the technique department. At times Farley can get lost in coverage and isn’t twitchy off the line of scrimmage. His athleticism allows him to negate any advantage he might give up from the snap. Farley does excel at getting his head on a swivel and locating the ball. To say he arrived at Virginia Tech as a high school QB committed to be a wide receiver, his progress has been stellar.

Wade is at an immediate disadvantage to the other two as his snaps as an outside corner have so far been limited. This means his value at the next level remains a projection. Wade is the essence of a playmaker, buzzing around closer to the line of scrimmage often with his eyes fixed closely on the QB. What we do need to see more of is his ability covering deep routes. With the Big 10’s recent decision to cancel fall football that may not be possible.

Virginia Tech’s Farley is a well built 6’2. It would be easy to presume he would be suited to an off coverage, zone scheme. While he does plenty of that, he more than holds up in man coverage. Part of the reason why is that he is a physical freak. That’s not just me saying that either. Farley made an appearance on Bruce Feldman’s preseason freak list due to being clocked at 24.16mph in game. That speed gives him the ability to hang with any receiver in college football.

Wade too, has excellent straight line speed. Likely to hit in the 4.3’s, it’s his speed that will likely convince NFL teams he can survive as an outside corner. What he does show is plenty of twitch, using his speed as a threatening blitzer from the slot. While Surtain’s numbers might not be as impressive as the other two it is his smoothness as an athlete that means he remains a surefire candidate to be the first corner off the board.

Both Farley and Wade flash physicality above and beyond what you would expect from a next level cornerback. Wade in particular is an excellent chess piece who can be used as a free blitzer. He has a natural thump on impact and has an ultra-desirable knack of being able to dislodge the ball and create turnovers through his tackling. Farley makes good use of his extra bulk at the tackle point. What I would like to see more of from Farley is mixing it up physically in press coverage. Too often, he relies on his recovery speed rather than establishing himself at the line of scrimmage.

Surtain comes out slightly below on this aspect but it doesn’t impact his overall grade. While he isn’t a violent tackler he rarely misses his target. He is a strong wrap-up tackler, who makes sure yards after the catch are difficult to come by.

It’s no surprise to see Shaun Wade compared to Minkah Fitzpatrick and Derwin James. Wade has seen time at almost all the sendonary positions. His tackling, speed and coverage skills mean he could be viewed as the type of versatile piece the NFL covets. Wade, may see his long term future at safety but will be desperate to prove himself as an out and out corner to enhance his next level earnings.

Both Farley and Surtain are traditional outside corners but it is the latter who I see adapting to life in the NFL slightly easier. Surtain has a more rounded game at the moment and should thrive in any scheme at the next level. Farley would be best suited to a Cover 3 defense to start with as he could be found out in press man, but ultimately he too should have no problem having a long career in the NFL.

Evaluating these three prospects and splitting them is difficult. All of them should hear their names called on Day 1 of the 2021 Draft. Surtain edges this one for me, his ability to shutdown number 1 receivers in the big college games sets him slightly ahead of the other two. I think Wade also possesses the ability to do so but has more limited tape. That means he and Farley are neck and neck. That being said PFF darling Farley could have the biggest ceiling of all three with the physical attributes he possesses.

formerly writing for the inside zone, rory will be breaking down college tape and keeping you up-to-date with all things CFB for the touchdown. an avid bengals fan, you can also find some of rory’s work at stripehype.com.

END_OF_DOCUMENT_TOKEN_TO_BE_REPLACED
Get 20% off PFF ELITE and prepare to win in 2019!