Chicago went into 2019 with high hopes of a winning season after winning the division in 2018. However it did not work out that way as they limped along to a disappointing 8-8 record.

Chicago’s 2019 season was perfectly illustrated in Week 1 against Green Bay. Their defense stood firm in only conceding 10 points but the offense couldn’t produce a single touchdown as they flailed along to a 10-3 defeat.

Chicago’s off season will likely be judged on one player alone when we look back, incoming Quarterback Nick Foles. The former Superbowl MVP failed to usurp Carson Wentz in Philadelphia before a disastrous spell in Jacksonville saw him play second fiddle to rookie Gardner Minshew to end the season. This feels like his last chance to establish himself as an NFL starter.

The Bears drafted tight end Cole Kmet and cornerback Jaylon Johnson in the second round, with both likely to see plenty of snaps in 2020. Robert Quinn joins the defensive front from Dallas with safety Ha Ha Clinton-Dix having gone the other way. 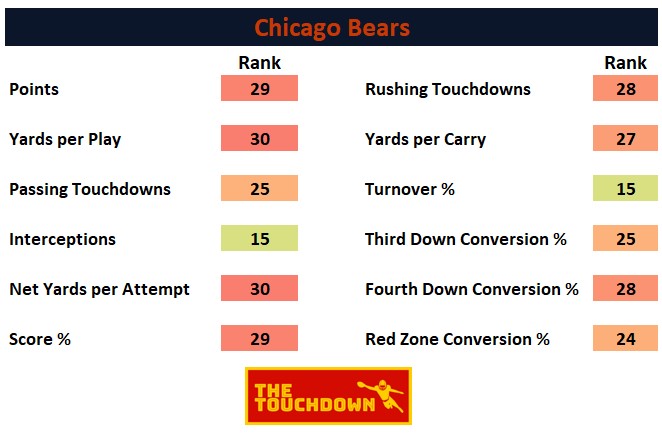 There won’t be many NFL defenses having sleepless nights over the prospect of facing the Bears this season. Mitchell Trubisky is running out of excuses at quarterback and it seems a stretch to suggest that Nick Foles is the answer.

Outside of the quarterback issue there still isn’t much that inspires excitement on the roster. The receiving corps looks positively average aside from Allen Robinson, whose 98 receptions for 1,147 yards in 2019 is remarkable considering the misfiring Trubisky was throwing his way.

Incoming tight end Jimmy Graham’s best days are behind him which should give Cole Kmet plenty of chances. David Montgomery was underwhelming at running back in his rookie season and needs to take a step forward in 2020. However, he may struggle again behind an uninspiring offensive line.

2019 could have gotten really ugly in Chicago, if not for their defense, and this unit will need to be every bit as good in 2020. The front seven looks solid and has acquired Robert Quinn to add to the x-factor brought by the likes of Khalil Mack and Akiem Hicks.

In the secondary the Bears may have a reason for concern. They look fine at cornerback; rookie Jaylon Johnson comes in and should he stay healthy the Bears have a first-round talent on their hands to slot in alongside Kyle Fuller. The question mark is at safety where the outgoing Clinton-Dix leaves some big shoes to fill. Tashaun Gipson joins from the Texans and has something to prove after an underwhelming 2019 campaign. That being said, even with the doubt at secondary this should be one of the better defenses in the NFL.

It is likely to be more of the same in 2020 in the Windy City. A dependable defense let down by an offense which simply does not have the talent to win enough games in the NFL.

MICHAEL’S INTEREST IN THE NFL BECAME AN OBSESSION ONCE HIS ATTENDANCE AT SUNDAY DINNER WAS NO LONGER MANDATORY, HE FOLLOWS THE RAVENS AND HAS A SOFT SPOT FOR THE DOLPHINS. YOU CAN FIND HIM ON TWITTER @NORBURYMIKE.

END_OF_DOCUMENT_TOKEN_TO_BE_REPLACED
Get 20% off PFF ELITE and prepare to win in 2019!