Tight end can be a troublesome position in fantasy football, unless you are willing to invest an early round pick. In redraft, a common strategy is to wait on tight end and take a gamble with some late round targets. Some seasons it ends well and others not so much.

Last year a popular target was Vance McDonald of the Pittsburgh Steelers, who some were confident could receive a hefty share of the targets vacated by Antonio Brown. Watching the highlights of him running over people helped reinforce that decision. Of course, he ended up being virtually non-existent after Ben Roethlesberger’s injury. That’s the risk you take.

The good news is that this year there are plenty of strong options at tight end outside of the top 4. Can you really get steady production from anyone not named Kelce, Kittle, Ertz or Andrews? For me, it’s a resounding YES! Here are some favourites that can be drafted in the late rounds and give you the production you desire from this often challenging position. 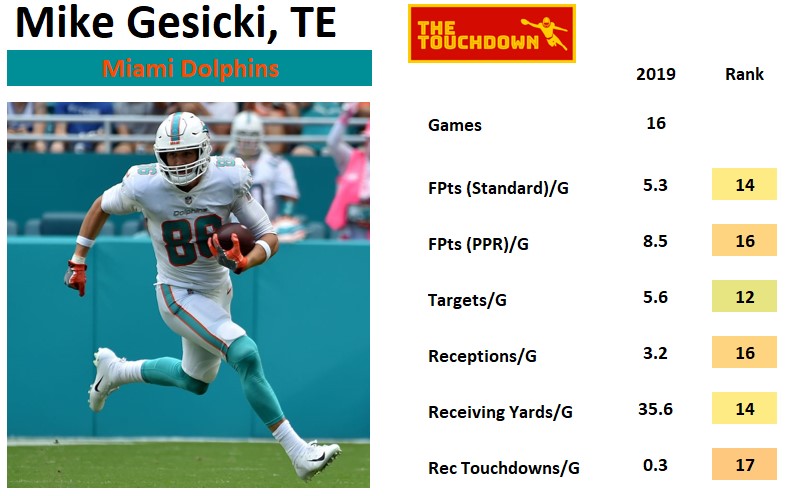 At 6’6, 250 pounds, this man is a physical specimen. At his size he is a huge factor in the red zone, which was evident from the five touchdowns over his last six games. Yes, he started off slowly last season, as did the Dolphins. However, he finished well, averaging a shade over seven targets per game from weeks 9-17 to go with the touchdowns.

Tight ends often take time to get going and coming into his third season, Gesicki may have a big coming out party, so be sure to get your invitation. Gesicki is projected to be used heavily in the slot under new offensive coordinator, Chan Gailey. This bodes well for steady targets and continued red zone opportunities. Currently with an ADP of TE #15, the upside is well worth it.

There was a reason Hurst was drafted in the first round by the Baltimore Ravens in 2018. There is also a reason they traded him to the Falcons for a second round pick, his name is Mark Andrews. Hurst possesses rare combination of speed and athleticism for the position and if you don’t believe me just ask Matt Ryan. Ryan has been impressed with his new Tight End and we should trust his opinion considering he’s played with Tony Gonzalez.

Hurst walks into a great opportunity and has a giant chip on his shoulder. These two factors alone should have you excited for his output in this offense. The Falcons are known for relying heavily on the tight end position and also did little to replace Sanu after his departure. Hooper left behind 97 targets, and there is the potential Hurst could see more. Grab him late and be confident he will finish in the TE1 category.

When Bill Belichick sings your praises and says you’re “great after the catch. Probably the best in the league. I can’t imagine anyone better than him after the catch,” I’d say you may be fairly talented. Smith is an athletic freak. Not only does he have good hands but the coaching staff has been finding ways to manufacture touches for him.

While the Tennessee offense will limit his number of targets, his YAC and manufactured touches should keep his production steady. There is a potential path to him being second on the team in targets, but that is not something you can count on. Smith will have some big weeks and you can draft him extremely late. If you take a chance you may be rewarded with a viable TE1.

Using a top pick on Kelce or Kittle is understandable. It gives you a big advantage at the position and an easy decision every week. The sacrifice you make is a first or second round pick, which may end up being the #1 RB or WR. If that is not a boat you are floating in, take these potential studs as late as possible!

NORMAN BÚN WAS RAISED IN NORTHERN CALIFORNIA AND NOW RESIDES IN A SUBURB OF CHARLOTTE, NORTH CAROLINA WITH HIS BEAUTIFUL WIFE AND TWO CHILDREN. HE IS A SCHOOL TEACHER AND WRITER WHO IS PASSIONATE ABOUT HIS FAITH, GOLF, MMA AND FANTASY FOOTBALL.

END_OF_DOCUMENT_TOKEN_TO_BE_REPLACED
Get 20% off PFF ELITE and prepare to win in 2019!