Nearly 3 years ago I moved to the Carolinas. I grew up in Northern California but chose to be a Chicago Bears fan by the age of 8. I blame the Super Bowl Shuffle. While my allegiance will always be with the Bears, I decided I could root for my new hometown team, the Carolina Panthers. What I soon discovered was that this town had a love/hate relationship with their star quarterback, Cam Newton. Last season, I joined my first fantasy league based in Carolina. This league had all kinds of wacky scoring rules that weighted heavily towards the QB position. I went ahead and pulled the trigger on the one and only Cam Newton! I was stunned that out of the 12 men it was the California boy who got Newton! I thought he was a steal in the 9th round! Yes, he had a disastrous 2019 but more importantly, I learned just how my new community really felt about Newton. Here in the Carolinas you either love Newton or hate him, there is no in between.

Therefore, given the indifferent attitudes toward the former-MVP in his old home, where there was often a void of talent around him, it is exciting that he received a ‘prove it’ deal from the best franchise in the NFL, let’s dive into this move.

After hearing about the New England Patriots signing of Cam Newton I had a few questions run through my mind: If the Patriots really thought Newton was their guy, why did they wait so long to sign him? Will he succeed in New England? What should the expectation be?

Join me as we look deeper into these questions and decide if this signing is as exciting as we all want it to be.

Newton's History in the NFL

Cam Newton was drafted #1 overall to the Carolina Panthers in 2011. He set the league on fire in his rookie season, throwing for over 4000 yards and rushing for over 700. He set the record for most rushing touchdowns (14) and led the NFL in yards per carry (5.6). The guy balled out. Newton quickly cemented himself as the face of the franchise, playing nearly every game for the next 7 seasons. In that time he led the Panthers to the Super Bowl in 2015, winning the league MVP along the way.

In 2018, the Carolina Panthers started 6-2. However, by Week 15, the Panthers had lost six in a row and Newton acknowledged that he was playing with a nagging shoulder injury. The team shut him down and he had offseason surgery to fix the shoulder. Newton started the 2019 season by losing the first two games; he was then held out Week 3 and never returned. He had played poorly and did not look like himself. A Lisfranc fracture was revealed and explained his lack of mobility and potentially his lack of accuracy if he had been unable to plant correctly. It was a big blow, one that sealed Newton’s fate with the team that once adored him. New owner David Tepper and new head coach Matt Rhule signed fellow quarterback Teddy Bridgewater to a large contract and Newton was cut loose, becoming a free agent. 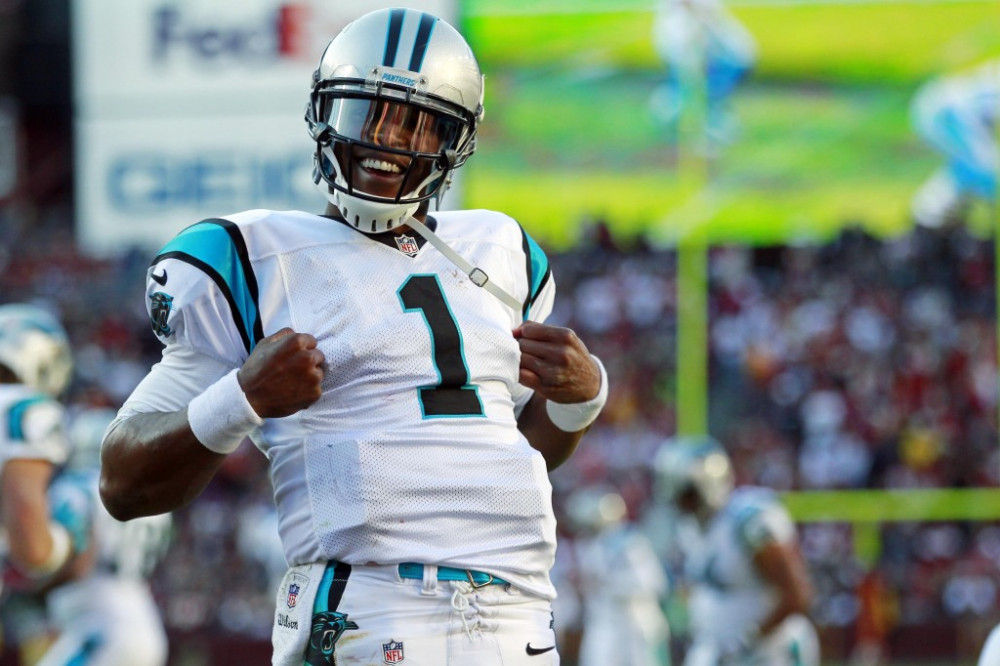 As a fantasy QB, Cam Newton has been a strong option throughout his career. His passing numbers won’t blow anyone away, having thrown for more than 4000 yards only once (rookie season). His only season with more than 24 passing TDs was his MVP season in 2015 (35). What has made his value high are the rushing numbers. He averages around 600 rushing yards and 6 TDs per 16 game season, which is a big reason for his relative safety.

In his first three years in the NFL, Newton was a top-five fantasy option. He finished 2014 outside of the top 12 but on a per game basis was in the top 10. In 2015 he was the #1 fantasy QB. 2016 he struggled and finished 16th, battling concussions and barely running the ball. He rebounded in 2017 by finishing as the #2 overall QB. In 2018 he was 12th. Last season, in the first 2 games of the year, Newton threw for exactly 0 touchdowns and rushed for -2 yards. These were his only games played and not a good indicator on what we can expect for 2020, as he was playing injured.

An Easy Decision for the Patriots

When Bill Belichick speaks, people listen. He has proven to be one of the best head coach of all time and one of the greatest minds the game has ever seen. Here is what he said about Cam Newton back in 2017:

“He’s the hardest guy to deal with’ … “I think when you’re talking about mobile quarterbacks, guys that are tough to handle, tackle, can throw, run, make good decisions – I mean, I would put Newton at the top of the list.”

Belichick respects Newton for the way he plays the game, that’s clear. So why did the Patriots wait so long to sign the free agent QB? Personally, I feel that the deal they offered was always out there. It’s a very team friendly deal from the organization with the least amount of cap space in the league. Sure Newton needs to prove something after last year but the man’s track record is strong. I’m sure he expected a better deal would come, but it didn’t. Reports say that New England was the only team to offer a contract to Newton.

Newton signed with the Patriots for peanuts because it was his only option! Especially since there were no other starting jobs available. His signing was nicely timed for the Patriots, as it coincided with the announcement of their penalty for what is being called Spygate 2, a $1.1 million dollar fine and a loss of their 2021 3rd round draft pick.

This was a simple decision for the Patriots. The upside to this signing is huge and if Newton ends up to be ineffective or injured, it costs them next to nothing and they can turn to Stidham, no problem. Rumours had it that offensive coordinator Josh McDaniels wasn’t high on the idea and that in his interview for the Carolina job, Cam was not who he wanted to run his offense. Is Newton the perfect fit to slide right in and run an offense similar to the one Brady ran? No. However, the Patriots have two of the best minds in football, so surely they can tailor an offense that will fit their new QBs skills.

Belichick wants to prove that he can get it done without Brady and when a man like this has a chip on his shoulder, watch out. Newton should also be highly motivated to prove to the league that he is still a force to be reckoned with. Two of the best at what they do with a chip on their shoulder offers terrifying potential for the Patriots.

Even without being a part of the virtual classroom, a veteran Newton should be able to pick up an offense fairly quickly. Can Newton adapt to the “Patriot” way? While his personality may seem too big for New England, the man is a professional. Hopefully, as we have seen in many players, it can bring the best out of him. As a professional athlete it should not be a struggle to buy into a culture of winning. New England sure knows how to do that.

If Newton wants his career to continue and get another big contract, this season will play a huge part in that. Newton looked dreadful last season, and he needs to change that perspective within the league. Additionally, you cannot use last year to project what Newton can be in 2020. True, you’re not getting the 2015 Cam, but if the man is healthy, there’s no doubt in my mind he can be effective in real life and in fantasy.

Evaluation of Newton hinges on his health and running ability. If he is not strong enough mentally or physically to escape the pocket and use his legs, his career is basically over. His pure passing game is not strong enough to be a pocket passer. If he can run for over 500 yards, the Patriots, and people brave enough to draft him, could be looking a top-10 QB option.

Despite the entire world of social media thinking different, his new supporting cast in New England is decent. He has the perfect slot weapon in Edelman, the big-bodied contested catch WR in Harry, a pair of good hands in Sanu and a poor man’s McCaffrey in James White. Newton never had much in the way of weapons in Carolina, but he found success because he is a play maker. Whether the Patriots have more wins or losses at the end of the season than if they had stuck with Stidham is something we will never really know, but with this deal, it’s a clear win.

Something we should have all learned over the past 20 years is to never bet against Belichick. Never.

NORMAN BÚN WAS RAISED IN NORTHERN CALIFORNIA AND NOW RESIDES IN A SUBURB OF CHARLOTTE, NORTH CAROLINA WITH HIS BEAUTIFUL WIFE AND TWO CHILDREN. HE IS A SCHOOL TEACHER AND WRITER WHO IS PASSIONATE ABOUT HIS FAITH, GOLF, MMA AND FANTASY FOOTBALL.

END_OF_DOCUMENT_TOKEN_TO_BE_REPLACED
Get 20% off PFF ELITE and prepare to win in 2019!