Bill O’Brien did in 2019 what he always does. He got the Texans into the playoffs. However, many Houston fans continue to be unnerved by his tenure. They finished 10-6 to top the AFC South, then going on to beat Buffalo in the playoffs. This victory came after falling to a 16 point deficit to start the game. The opposite was true in the divisional round, with Houston falling to Kansas City, surrendering a 21-0 first quarter lead. Scoring just 10 points in the final three quarters of the game, the Texans eventually lost 51-31 to the eventual Superbowl winners.

O’Brien strengthened the offensive line with the acquisition of Laremy Tunsil from Miami, giving away their 1st round draft pick in the process. Tunsil was one of three Texans players to go to the Pro Bowl last year. The second was quarterback Deshaun Watson, who threw for 3,852 yards and 26 touchdowns. The third, DeAndre Hopkins, was traded to the Arizona Cardinals in the off-season.

The Texans had the busiest and most newsworthy of off-seasons. Yes, I’m talking about *that* trade.

Bill O’Brien, in an acting general manager role, decided to trade DeAndre Hopkins and their fourth round pick in the 2020 draft to the Cardinals. In return, Houston ensured the services of running back David Johnson, a second in 2020 and a 2021 fourth round pick. The move was roundly criticised, and even ridiculed. Houston gave away its second most valuable asset for less than a first round pick. To add insult to injury, they themselves had to give up draft capital as part of the deal.This trade was heavily weighted against the Texans. It appears to be definitive proof that O’Brien makes a good head coach but a terrible GM.

Other noteworthy moves included bringing reliable wideout Randall Cobb to shore up their self-inflicted need at receiver. He won’t provide a like-for-like replacement for Hopkins, but a 3 year $27m contract suggests that he will be expected to contribute in the coming years. 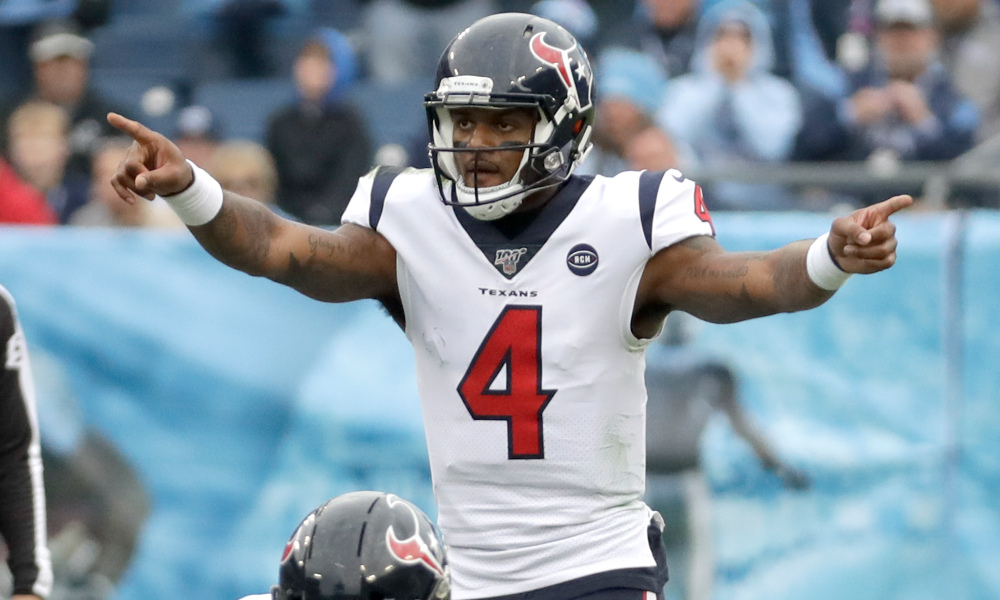 DeAndre Hopkins was #3 in the entire league for receptions in 2019 with 104. Only Christian McCaffrey and Michael Thomas had more in the NFL. Hopkins had 1,165 receiving yards (29% of the team total) from 150 targets (Will Fuller V was second with just 71). Without doubt, Hopkins was Watson’s favourite receiver in 2019.

Somehow, Bill O’Brien and Deshaun Watson are going to have to come up with a way to make up for the loss of “Nuke”. With Will Fuller V, Kenny Stills, Brandon Cooks and Randall Cobb, Watson won’t be short of weapons. What remains to be seen is whether any or all of them can step up to fill the gap left by Hopkins’ departure.

In the running game, the Texans also lost their most productive player from 2019. Carlos Hyde ran for 1,070 yards and 6 touchdowns before leaving in free agency. Second in rushing on the team was the a
quarterback, Watson. David Johnson, formerly of the Cardinals and part of the Hopkins trade, should be able to step in here. However in 13 starts last year Johnson achieved less than 400 yards. He hasn’t averaged 4 yards per carry or better since his second year in the league (2016).

In terms of the offensive line, Watson will be hoping for better in 2020. He was sacked 62 times in 2018, a worrying stat. Although this number improved in 2019 (to 55), Watson remained the most sacked quarterback in the NFL. That said, Houston has the foundation of an impressive front trench with Laremy Tunsil, Max Sharping and Tutus Howard. Howard’s first year in the league ended prematurely when he suffered a torn ACL. Bill O’Brien will be hopeful that his right tackle has fully recovered for the season ahead.

Overall, this was a below average defensive unit in 2019. The team ranked #19 in the league last year, a disappointing return for a unit with J.J. Watt, Whitney Mercilus, Zach Cunningham and Justin Reid contributing.

Naturally, missing defensive talisman J.J. Watt in 8 games last year hurt the side. In his place, Mercilus led the team in sacks (7.5) and tackles for loss (14). Cunningham led the side in total tackles (142). This is a pass rush that sorely needs Watt to be healthy for a full season, something he has struggled to achieve in the past.

The Texans D blitzed on 33% of snaps in 2019 (8th in the NFL), but managed just 31 sacks in total (27th). The team conceded 6.1 yards per play on defence last year, the worst in the NFL. Houston fans will be hoping that this can also be put down to Watt’s absence for half of last year.

Across the league, the Texans finished 25th in run defence and 29th against the pass. Their 12 inceptions was just shy of the league average (12.8). It seems as though they need to improve in the secondary as well as up front if the Texans want to top the AFC South next year.

Put simply, this is a unit in need of improvement across the board in 2020. O’Brien’s decision to draft DT Ross Blacklock and edge rushes Jonathan Greenard with their first two picks in the Draft suggest that the franchise is fully aware of the need to improve the defence. Expect both to contribute to the team in their rookie years.

The Texans will regress in 2020. The loss of DeAndre Hopkins is going to hit the franchise hard. Will Fuller is great when healthy, but has a catalogue of injuries in his past. Cobb, Cooks and Stills form a productive receiver group for Deshaun Watson, but they lack a true WR1.

They’ve also got the toughest schedule of all teams in the AFC South. Theirs ranks 8th in NFL, with opponents averaging a 0.518 record in 2019. They kick-off the season at Arrowhead to take on the reigning Superbowl champions. Not only is this the hardest possible start to a season, but it may also reopen old wounds from the playoff loss last year.

Rumours of Houston’s demise have been gravely exaggerated though. Criticism can be made of Bill O’Brien’s recent trades, but he knows how to make the playoffs. Watson is one of the game’s most promising quarterbacks, and will relish the chance to elevate the Texans’ offence. This year, however, they will fall short of the postseason.

TOM WATCHED HIS FIRST EVER NFL GAME AT AN EX’S HOME IN NORTH CAROLINA IN 2013 AND “ENCOURAGED” TO SUPPORT THE INDIANAPOLIS COLTS. ONE BREAK-UP AND FOUR YEARS LATER, HE SWITCHED ALLEGIANCE TO THE JETS AND HAS BEEN OBSESSED WITH THE GAME EVER SINCE. TOM CAN BE FOUND ON TWITTER AT @DOWNTHEMANNYRD

END_OF_DOCUMENT_TOKEN_TO_BE_REPLACED
Get 20% off PFF ELITE and prepare to win in 2019!