The Bucs appointed Bruce Arians to unlock Jameis Winston in the last year of his rookie deal. With that, the minimum expectation would be that everyone at One Buc Place would know by the start of the new decade, one way or the other, whether Winston was a franchise-calibre quarterback or not.

By the time they got to London, Winston and the team had produced a complete encapsulation of the entire Winston era. Impressive wins against the Panthers and Rams, the later seeing the Bucs blitz the franchise points record with a brilliant four touchdown display from Winston. Disappointing defeats against the 49ers, with two pick-six’s and a one-point loss to the Giants with a missed game-winning field goal.

The London game should have been the death nail to the Winston era, five interceptions and six turnovers in a defeat that was the difference between 3-3 and a play-off push and 2-4 and looking to the draft. Especially when they then dropped to 2-6.

Then, good Winston returned with the season already gone. Going 5-1, only losing to the Saints (albeit with four more Winston interceptions) and then even going toe-to-toe with the Houston Texans in Week 16.

However, Winston’s rookie deal then ended in a game that summed up the entire four years. An excellent first half with two touchdown drives, building up 22-16 lead, before ending his Buccaneers career with a match losing overtime pick six, breaking another record: 30 TD’s and 30 INT’s.

In winning the Tom Brady stakes, the Buccaneers automatically ‘won’ the offseason, even before they tempted Rob Gronkowski out of retirement as well. This is not the first time in the last decade or so that the Buccaneers have ‘won’ that hype award and it has never transported them to the play-offs.

They also managed to keep every quality starter on both sides of the ball, including the defensive front seven, which was not only possibly the best unit on the team in 2019 but also the one that had the most free-agents. 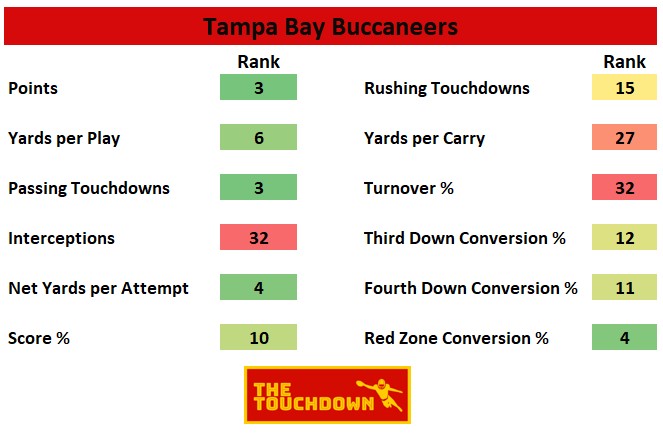 In breaking down the Brady Bucs offense, it is first worth working out why he chose the Bucs in the first place.

$25 million a year for a two-year deal is a staggering amount for any 43-year old sportsman, in this unique case it is almost certainly less than he could have demanded so it obviously isn’t purely about money (as it never really has been with Brady).
So why Tampa?

Well looking at the roster on paper, the obvious answer is the receiving core. Mike Evans is, at worse, a top-five receiver in the NFL. Meanwhile, Chris Godwin on the other side in 2019, being used in the slot like Arians’ used Larry Fitzgerald in Arizona, broke out in such a way that there is an argument to be made that he is a better receiver than Evans right now. That is before you even get to a stable of Tight Ends that included a first round pick in OJ Howard and one of the best pure red-zone targets in the league in Cameron Brate even before Gronk arrived.

This is the best receiving core Brady has had since the 18-1 team… if not ever.

But there is more to it than that. One thing that anyone who has seen anything about the history of Tom Brady knows is that he thrives on reacting to perceived slights and criticisms and on proving people wrong in a similar way anyone who saw ‘The Last Dance’’ will know that Michael Jordan did. In leaving New England to go anywhere else, Brady was going to attempt to prove those who call him a system QB wrong.

In going to Bruce Arians’ ‘No risk it, No biscuit’ offense, he is going to be asked to throw deeper and more aggressively than he has ever done before. Especially when you consider that it might be the worst stable of running backs he has ever had in Ronald Jones; a third-round rookie that was a reach and an ageing LeSean McCoy. 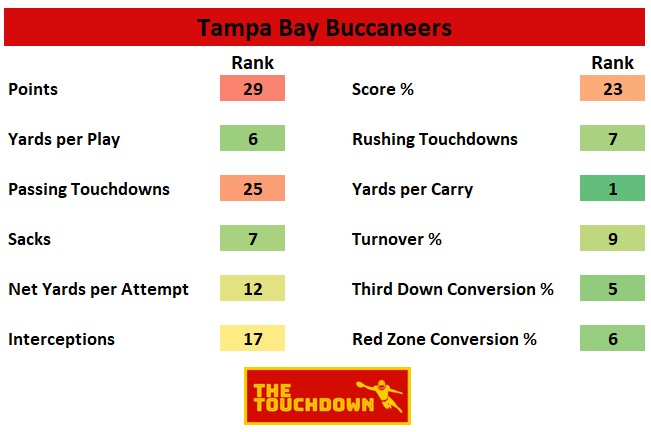 The Buccaneers front seven was one of the most impressive units in the entire NFL last season and outside of rotational piece Carl Nassib, they have returned the entire unit.

As a pass-rushing combo, they were seventh in sacks and fourth in pressures in the league. Breakout star Shaquil Barrett was the sack leader with 19.5 but more importantly, he ranked fourth in pressures, meaning that it is highly likely he will prove much more than a one-year wonder.

However, three things happened on defense that did more to spark that 5-1 run in the back-half of 2019 than anything else. Jason Pierre-Paul managed to return from career-threatening injury at a seemingly elite level for the second time; Rookie Devin White also returned and looked like the second coming of Derrick Brooks, except maybe even faster!

While the third was the young defensive backfield stopping blowing coverages as a result of just learning the Todd Bowles scheme, with both Carlton Davis and Jamel Dean looking competent NFL corners by December. Adding one of the best safeties in the 2020 NFL Draft in Antoine Winfield Jr. can only help further.

FoxSports Colin Cowherd recently described the 2019 Tampa Bay Buccaneers as ‘an above-average team that only needed an adult at quarterback.’

That is an incredibly harsh dig at Jameis Winston but in some ways he is right. Replace Winston with someone who has half his talent, but a third of the interceptions and the Bucs make the play-offs last year. A player like Andy Dalton or Jacoby Brissett would have got them there; maybe even a Case Keenum or Tyrod Taylor could have done.

We simple do not know what Brady will look like in Tampa. But if that is the required floor for a play-off run then there is no way the Buccaneers miss-out.

END_OF_DOCUMENT_TOKEN_TO_BE_REPLACED
Get 20% off PFF ELITE and prepare to win in 2019!