2019 was yet another rinse and repeat season of the same things as most of the last 10 years in New Orleans. The aim was to win a division that, despite periods of challenge from both Cam Newton’s Panthers and Matt Ryan’s Falcons, they have been the top dogs in for most of the decade. Then the aim was to prove they are an NFC elite side by returning to the Super Bowl to add a second title to the one they won at the start of the decade.

However, the second part did not go as well. After two consecutive season where they had to pick themselves off the floor from a debilitating post-season loss. With the ‘Minneapolis Miracle’ having been followed by the pass interference no-call on Nickell Robey-Coleman in the 2018 NFC Championship game.

The division winning part was once again completed with minimal fuss. In fact, a 5-0 stretch with Teddy Bridgewater behind center (with Alvin Kamara missing a game and a half of those too), demonstrated that Sean Payton and the Saints have such a well-rounded unit that they don’t need elite quarterback play to win.

However, having strolled to a 13-3 record in quite possibly the worst edition of the NFC South in the entirety of the past decade, with a chance to atone for the Minneapolis Miracle, they fell apart for three quarters. They were 20-10 down having seen ‘gadget-man’ Taysom Hill produce the only good throw by a Saint in that entire time. Brees did then manage to turn it on in the fourth quarter with two drives to send it into overtime. However, the Vikings won the coin-toss, got the ball and immediately drove for a touchdown that gave the Saints yet another heartbreaking playoff defeat.

Once the contract was signed and it was official that Drew Brees would be returning for 2020, the major aim of the 2020 offseason was to continue to replace the free-agents they were due to lose. This they did so in typical Saints fashion with gymnastic feats of Salary Cap contorting and somehow ending up with potentially better replacements than the players they lost.

They even managed to replace Teddy Bridgewater with Jameis Winston, a player whom, for all his weaknesses, has the kind of upside that Bridgewater simply doesn’t. Even in losing three-time Pro-Bowler Larry Warford to a opt-out, they had already drafted a ready-made possible replacement in Cesar Ruiz. 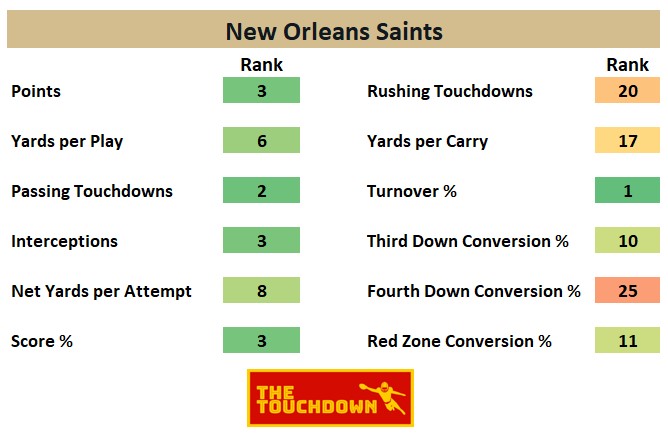 For all the talk about the problems being levelled at Drew Brees during 2019, especially questions over his arm-strength and related concerns over his form outside of a domed environment, he was still a top-tier NFL quarterback in 2019. In fact, he actually managed to have a career best passer rating in despite those concerns.

Even if he has lost a touch of arm-strength then the way they have upgraded from pure-deep threat Ted Ginn to the much more multi-faceted Emmanuel Sanders just creates yet another weapon that can be more effective for Brees. Sanders will love the advantage of playing opposite Michael Thomas who is still one of the hardest matchups in the entire league at receiver.

Meanwhile, if you are looking for someone to step up and replace Ginn’s deep threat, Taysom Hill finding Pro-Bowl rookie returner Deonte Harris for that 50-yard bomb in the wildcard game suggests their could well be a role on offense for Harris.

Their one-two punch at running back took a step-back in 2019, purely because of a slightly down year from Alvin Kamara, who attributed his slight drop-off to injury. A fully fit Kamara could easily put himself back in the conversations as the second best-receiving back in the league behind McCaffrey.

They have even added another hybrid wildcard in former Packers third-round pick Ty Montgomery, adding another unique offensive weapon for Sean Payton, just as the rest of the NFC are still trying to game plan for Taysom Hill.

Time for Brees won’t be an issue either, seeing as the Saints will return four-fifths of a top-tier unit from 2019 and adding their first-round pick Cesar Ruiz to it, with the rookie sliding across from centre to guard to replace Larry Warford. 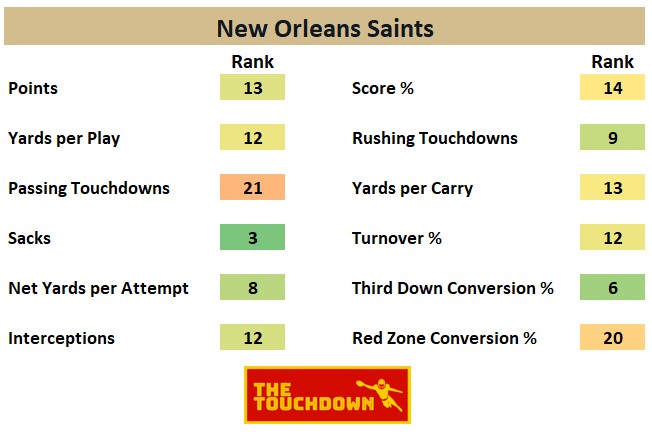 There was a time early in Sean Payton’s reign, even when they won the Super Bowl, where the Saints would win despite their defense. That has not been true for some years now. The Saints have elite players littered all over their defense.

The head of that list might be a cornerback trio that could match any in the entire league. With Marshon Lattimore and Janoris Jenkins outside and Patrick Robinson in the slot, it is completely unsurprising that the one off-season loss they felt they did not need to replace was Eli Apple.

Considering their likely NFC South rivals in Tampa can have three-tight end threats on the field in Rob Gronkowski, Cameron Brate and OJ Howard, having a safety trio of Marcus Williams, Malcolm Jenkins and DJ Swearinger as well as the return from injury of Alex Anzalone in front of them will be crucial to winning the division.

The only big question on the entire roster is who can provide the pass rush opposite Cam Jordan. The plan was for that man to be Marcus Davenport, who the Saints traded away a future first-round pick to go up to grab him in the 2018 NFL Draft. However, 10.5 sacks in two seasons is less than what you want for a 14th overall pick that also cost another first round pick. As a result, they have added Zack Baun in the second round of the 2020 Draft to put pressure on Davenport. They also added Magnus Hunt to put pressure on the likes of Sheldon Rankins and David Onyemata on the inside of that line.

All it would take is one of those, or a combination of those to provide a compliment to Jordan and they may have an elite front-end as well as strong back end to their defense.

Purely in names on paper, the Saints may have the best 1-53 roster in the entire NFL. The only reason the are not Super Bowl favourites is the horror show that has happened to them in the last three years of the play-offs.

Never though, has their Super Bowl window been so short. Thanks to COVID-19, their Salary Cap contortions of pushing money down the road will come back to bite them now the incessant rise of the cap is about to end. If Brees and Payton want a ring, in the words of Elvis Pressley, ‘It’s Now or Never’.

END_OF_DOCUMENT_TOKEN_TO_BE_REPLACED
Get 20% off PFF ELITE and prepare to win in 2019!