Year three under Kyle Shanahan represented the long overdue return to relevance for the San Francisco 49ers. Driven by a phenomenal defense and an analytics-defying run game, the 49ers swept almost all before them on their way to a seventh Super Bowl appearance.

Their superb regular season record was built on the foundations of an 8-0 start to the season, in games that proved a litmus test for how far the team could go following the additions of Nick Bosa and Dee Ford alongside the return of Jimmy Garoppolo from an ACL injury.

After a late season blip, largely the result of injuries to key players on the defensive side of the ball (Ford, Kwon Alexander and Jaquiski Tartt), the 49ers bounced back with a vengeance in the playoffs, swatting aside the Vikings and Packers en route to the Super Bowl. Despite leading the Super Bowl 20-10 heading into the fourth quarter, defensive miscues and missed chances on offense saw the Chiefs score 21 unanswered points to lift the Lombardi Trophy.

Overall, the 49ers impressive +169 point differential suggests the 2019 season will not prove to be a flash in the pan (injury permitting).

With the 49ers facing a slight salary cap squeeze and several important players’ contracts expiring following the 2019 and 2020 seasons, the 2020 offseason was a crucial one for the team. The objective: keeping the band together and reloading for another Super Bowl charge in 2020.

The major dilemma facing the Front Office was essentially choosing between DeForest Buckner and Arik Armstead. Everything being equal, the former made the most sense, but with Buckner looking for an Aaron Donald-esque deal and a first round pick from the Indianapolis Colts on the table, the 49ers traded away their star defensive tackle. In return, the team were able to re-sign Armstead, after a breakout season in which he demonstrated his pass rushing prowess inside, versatile safety Jimmie Ward and draft Buckner’s presumed replacement, Jason Kinlaw. On paper, it seems like the Front Office did an excellent job in a difficult situation.

Meanwhile, they also used their remaining draft picks to accumulate talent at positions of obvious need – an understandable approach given the team had few obvious holes. They manoeuvred in the first round to secure Shanahan’s reported favourite wide receiver in the draft, Brandon Aiyuk, and then secured a trade for seven-time (!!!) Pro Bowl left tackle Trent Williams. This latter move was a stunning development after the retirement of long-serving, six-time Pro Bowl left tackle Joe Staley, whose departure threatened to derail the 49ers’ offensive line improvement. 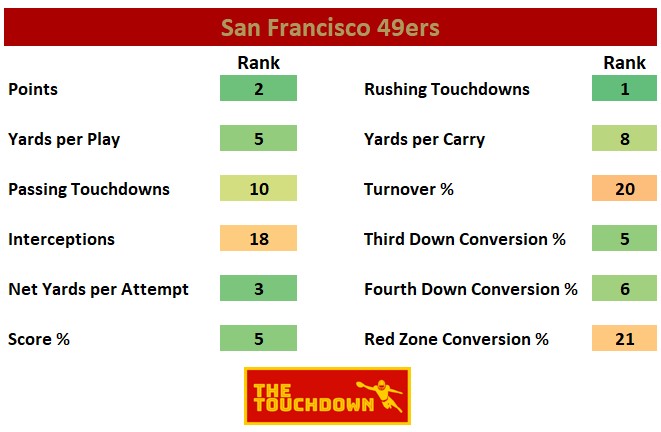 The 49ers’ offense looks set to continue pursuing the recipe that saw them achieve the league’s 7th best offense in DVOA in 2019: a dangerous outsize zone rushing game paired with a YAC heavy passing attack working off play action & their rushing threat.

Given Jimmy Garoppolo’s strengths, this approach makes sense. He has good movement skills (even after his ACL injury), a lightning fast release alongside plus accuracy in the short to intermediate areas of the field. Question marks remain over his deep accuracy however. Garoppolo rarely throws deep and on the occasions he does, his targets tend to have been schemed open. If he can improve in this area, the 49ers’ offense could reach another level, with Garoppolo more able to take advantage of the abilities of Deebo Samuel, George Kittle, Kendrick Bourne & Brandon Aiyuk to uncover in the intermediate-deep areas of the field.

With regards to Kittle, the former Iowa Hawkeye is the true superstar on the 49ers’ offense and has now been locked up through the 2025 season. Kittle’s dominance in the pass-catching and blocking departments are unmatched at the tight-end position in the NFL & ensure he is a crucial part of the 49ers’ offensive puzzle and will remain so for years to come.

In many ways, a similarly surprising offensive star to Kittle (given their pedigree when they first arrived in the Bay) is running back Raheem Mostert. The special teams standout, who delivered some of the bigger hits of the 49ers’ season as a punt gunner, was astonishingly productive as a rusher, recording a league leading rushing DVOA of 26.8%. His staggering acceleration along with his angle-obliterating top speed was a recipe for success behind an offensive line that proved to be highly effective running Shanahan’s elite rushing offense. With Trent Williams now added to the mix and Daniel Brunskill highly regarded, the 49ers’ offensive line could take another step. 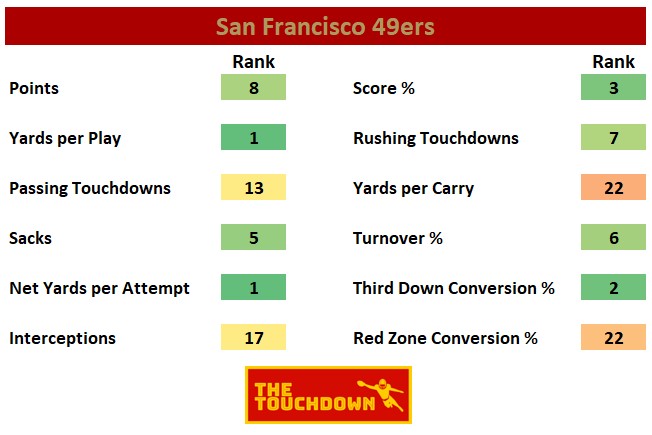 With Kyle Shanahan trusting himself to manufacture an offense with specifically curated skillsets, the bulk of the 49ers’ investment has gone onto their defense. This is an obvious philosophical point of emphasis, with the decision-makers recognising the need for elite talent on the defensive side of the ball to have consistent success down in, down out.

This approach bore fruit in 2019, as the 49ers’ defense was rated second best in the NFL by Football Outsiders’ DVOA metric, despite their late season blip. The same (mostly youthful) defense that kept the Chiefs’ offense quiet for three quarters in the Super Bowl (and arguably just needed one successful drive from its own offense in the fourth quarter) returns largely intact in 2020 a year more experienced and healthy after an unusually long offseason.

The 49ers’ defensive success is predicated on the symbiotic relationship between high quality pass rush and sound coverage. The former took an enormous jump in 2019 following the additions of Nick Bosa and Dee Ford, despite the regular absences of the latter. If both players can be healthy for large chunks of 2020, expect the 49ers’ pass rush to continue to excel even after the aforementioned departure of DeForest Buckner.

The trio of Alexander, Warner and Williams also form crucial parts of the 49ers’ coverage unit. Warner had a breakout season in 2019 in which he showed his superlative processing abilities to routinely take away a quarterback’s first and second reads on concepts that were supposed to place him in conflict. Furthermore, his aggressiveness attempting to punch the ball out led to 3 forced fumbles on the season and his coverage ability was rewarded with 2 interceptions in the 49ers’ final 5 games of 2019. Warner looks set to be a game-changing linebacker for a long time as he enters his third NFL season.

The secondary is headlined by veteran cornerback Richard Sherman. Though his movement skills are not what they once were, his ability to read route combinations and his deep understanding of viable threats within the 49ers’ scheme ensures he remains a high calibre NFL corner. The 49ers also possess the NFL’s most underrated and versatile safety tandem of Jimmie Ward and Jaquiski Tartt. Ward has played every position in the secondary since being drafted in 2014 & has immense value in coverage as a result due to his versatility and the ability to disguise pre-snap looks as a result. Tartt too has enabled the 49ers to disguise their pre-snap looks, with his superb efforts as a box defender against the pass & run and, unusually for a safety of his size, his quality as a deep cover player. The pre-snap disguise elements & his safeties’ versatility allowed DC Robert Saleh to make what is normally quite a predictable scheme more unpredictable for opposing offenses.

Emmanuel Moseley could be the 49ers’ breakout player if he wins the starting cornerback job opposite Richard Sherman. The former UDFA is sticky in coverage and a physical tackler and can also play at nickel corner. He has done enough in limited snaps to suggest he can become a valued member of the 49ers’ secondary in years to come. Oft-injured Jason Verrett is another candidate for the job and early reports are that the former Chargers standout has been impressive in training camp. Former incumbent Ahkello Witherspoon faces an uphill battle to reclaim his job, but if he can become more consistent, he has demonstrated the high level quality to be an NFL starter.

The NFC West once again looks set to be one of the most competitive divisions in the NFL. The Rams and Seahawks have impressive talent on both sides of the ball whilst the Arizona Cardinals look likely to have a high-powered offense even if their defensive rebuild may take another year.

Nevertheless, the 49ers have the quality to rule the roost and their opening 6 games all look eminently winnable, helped by 4 of them being at home. From then on, the 49ers face a gauntlet of quality teams but if they show the same ruthlessness as in early 2019, they could build themselves a strong platform to carry into their more difficult games. A first round bye will be the goal and could well be achieved once again, with the 49ers possessing one of the most complete rosters in the NFL.

SCOTT (@SCOTT_GEELAN ON TWITTER)  IS A LAW STUDENT AND WILL BE COVERING THE NFC WEST FOR THE TOUCHDOWN. YOU CAN ALSO FIND HIS WORK AT NINERS NATION & NOTHING BUT NINERS. HE LIVES IN BIRMINGHAM.

END_OF_DOCUMENT_TOKEN_TO_BE_REPLACED
Get 20% off PFF ELITE and prepare to win in 2019!