The combination bore instant fruit on the offensive side of the ball. According to Football Outsiders’ Offensive DVOA statistic, the Cardinals’ offense leaped from 32nd in the NFL in 2018 to 13th in the NFL in 2019. Their opponent weighted offensive DVOA was 7th in the NFL. This was despite seeing receivers with the profile of Damiere Byrd, Keesean Johnson and Pharoh Cooper play reasonably prominent roles in the offensive rotation. Kingsbury’s reportedly incredible work-ethic produced unique, specifically-tailored game plans from week to week and he demonstrated an intelligent understanding of his players’ strengths to put them in positions to succeed.

The Cardinals’ poor record was primarily a reflection on their disappointing defensive efforts. Whilst the team had some talented pieces on the defensive side of the ball, the unit lacked quality as a whole, particularly at linebacker and on the back-end. This ensured an especially poor performance in pass defense including leading the league in YAC. This in turn led to the team coming 28th in yards/play on the defensive side of the ball and having the third highest percentage of drives ending in points for the opponent in the entire NFL.

The Cardinals had seven draft picks in 2020, after using 11 in 2019. Their most significant business involved their second round pick, which they traded to the Houston Texans as part of a package for three-time First Team All-Pro wide receiver DeAndre Hopkins, with unwanted running back David Johnson going the other way. General Manager Steve Keim took advantage of the breakdown of Hopkins’ relationship with Texans Overlord Bill O’Brien to acquire his offensive whiz HC and stud young quarterback arguably the best wide receiver in the NFL.

Meanwhile, the Cardinals also added highly sought after safety-linebacker Isaiah Simmons in the first round, as Keim’s interest in versatile hybrid players that has already borne fruit with Deone Bucannon, Tyrann Mathieu and Budda Baker emerged once again. The Cardinals will hope Simmons can be part of the answer to their intermediate coverage struggles, as well as providing an off-ball blitzing presence to add further unpredictability to their pass defense. Former Falcon De’Vondre Campbell is another acquisition aimed at plugging the Cardinals’ issues at off-ball linebacker. 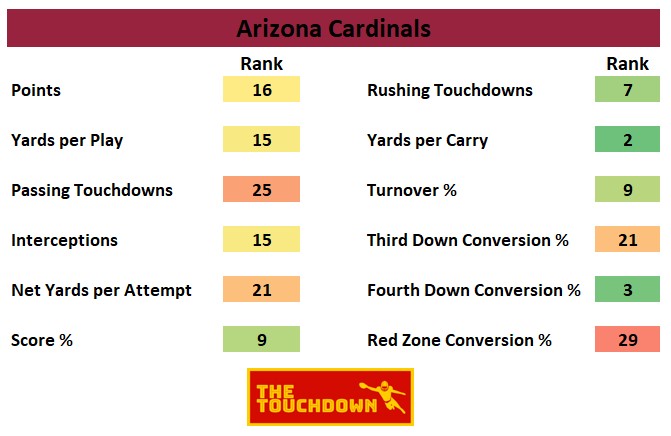 In Year 2, there is a very real prospect that the Cardinals’ offense will take another step. Kingsbury’s schematic prowess and sharp eye for appraising players will likely ensure the continued excellence of Larry Fitzgerald, whilst Christian Kirk had a solid sophomore campaign. With superstar DeAndre Hopkins’ arrival, the offense possesses even more pieces for Kingsbury’s machinations.

In light of that, Murray is primed for a breakout second season. The pocket-rocket with the bazooka-arm showed all of the talent that made him such an exciting prospect. Murray’s deep accuracy led the NFL, including being frighteningly accurate on throws of over 31 air yards as well as on throws under pressure and on throws into tight windows. With NFL defenses forced to account for Kingsbury’s quick strike options, Murray’s rushing ability making run defense 11 v 11, and his stunning deep throwing, the Cardinals’ offense will continue to be devilishly complex to game-plan for.

Furthermore, midseason acquisition Kenyan Drake proved a superb fit in Kingsbury’s flexible rushing attack. He was third in the NFL in rushing DVOA and fifth in Defense-adjusted Yards Above Replacement (DYAR). With the offensive line having been reinforced by the drafting of Houston tackle Josh Jones as well as the re-signing of Max Garcia and D.J. Humphries, both Murray and Drake can hope for improved assistance from the big men in front of them. 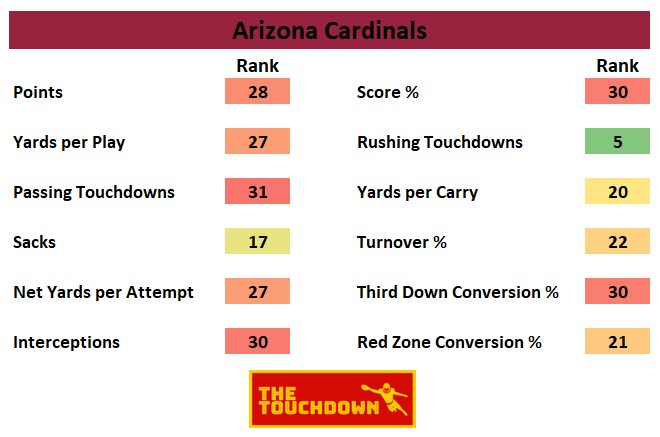 The Cardinals have enough talent on defense to suggest they should make improvements on their poor 2019 performances. Chandler Jones is one of the leagues best pass rushers; when available, Patrick Peterson is a special cornerback; and Budda Baker is a do-it-all chess piece who sets the tone on the back end. It remains to be seen whether Vance Joseph places a glass ceiling on the defense; having been widely criticised in recent seasons.

Even so, the Cardinals’ run defense was actually reasonably solid in 2019, and whilst certain useful pieces have departed, notably Rodney Gunter, the team signed Jordan Phillips and will hope Zach Allen is ready for a more prominent role.

The key however, will be in improving their coverage performance. Isaiah Simmons will be earmarked to play a key role in that, and has reportedly spent a lot of time at linebacker in the shortened NFL offseason. His speed and versatility will give the Cardinals a real weapon in their short-intermediate coverage as well as someone who can blitz unaccounted for in a manner similar to Derwin James.

Meanwhile, an available Peterson should be able to allow support to be directed to the other flank, where second year player Byron Murphy will hope to improve after a difficult first season. Meanwhile, Murphy’s fellow second year player, Jalen Thompson (safety), will look to build on a promising rookie campaign after being selected in the 2019 Supplemental Draft.

The Cardinals’ biggest challenge is the staggering quality of opponents in the NFC West. Improving on their 1-5 division record from 2019 will be a massive challenge but will also play a major part in how close they can get to .500.

Even so, an early bye means the Cardinals’ regular season will have a lengthy tail which includes a difficult run of games. If the Cardinals can get to the bye at 4-3 (which will require at least one road win), they will have built themselves a reasonable platform to attack the rest of their 2020 campaign. Get to the bye in worse shape and they may leave themselves a lot to do. They will likely still be NFC West bottom feeders, but if their offense excels, they could be a surprise package and cause some upsets.

END_OF_DOCUMENT_TOKEN_TO_BE_REPLACED
Get 20% off PFF ELITE and prepare to win in 2019!