Before the days of the Madden empire, and even before the war between EA and 2K for gaming dominance, there was an undisputed king of the virtual gridiron. Across the NES, SNES, Sega Megadrive (or Genesis, if you want to get American about this), Tecmo Bowl, and Super Tecmo Bowl, provided the NFL simulation experience. As gaming moved into the 3d era, and EA Sports began to flex its financial clout, the Tecmo Bowl dream began to fade. Sans a revival attempt on the Nintendo DS, of course. With little more than a Family Guy joke keeping the flame alive, we feared those heady days may be condemned to history.

Fortunately, a few fine folk refuse to live in such a universe.

For the past few years, the people behind New Star Soccer have been thrilling American Football fans the world over with Retro Bowl; a seriously addictive top-down mobile title wth blocky 8-bit graphics designed to evoke the feelings from days of yore. The pick up and play nature of the title has seen thousands, myself included, lose more hours than we care to admit to the endless pursuit of winning it all. So popular it has been, it’s making it’s way to the Nintendo Switch. And you know what? It makes the transition pretty well. 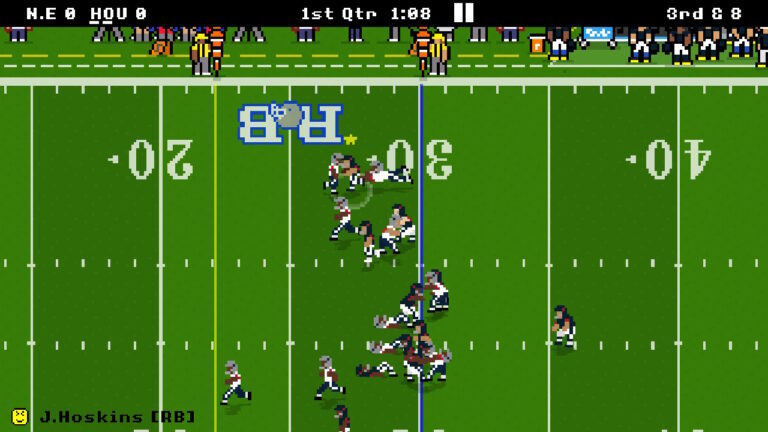 There’s something odd about a mobile title making the jump to consoles. By and large, mobile games just aren’t suited to a big screen, or a controller. The Switch, then, makes it the ideal platform to make that leap. Unlike with, say Angry Birds on Xbox 360 (remember that?), Retro Bowl on Switch can be played with the games’ original touchscreen control scheme, with few compromises. Well, I say “few compromises”; the Switch is a fair bit larger than your standard mobile phone. It feels strange to hold a device considerably larger, and heavier, while playing a game you’ve kind of mastered over the past two years on a smaller screen.

The great thing about the Switch is that you can play your games either on the console’s screen, or on your TV while it’s docked. Retro Bowl, of course, is no exception. What that does mean, however, is you’re confined to button controls, and that’s where things go somewhat awry. Retro Bowl is a game designed for simple flicks and swipes, so it feels somewhat less engaging with a controller in hand. That, and a control stick effectively breaks an entire half of the game.

You see, with a touch screen, you control your QB’s passing by touching the player, pulling back, and letting go when you have the angle. With the controller, you move an on-screen cursor to where you want to throw the ball, and press A. In theory, you’re getting something suited to the scheme. In practice, accuracy is a complete non-factor. Knowing exactly where your pass is going to go means you no longer have to spend vital XP on that particular statistic. It’s an odd thing, and you wonder why anyone would choose to pass with touch controls as a result.

It’s even stranger when you try to run the ball. With the touch screen, you’re swiping up and down to juke away from defenders. That action is replaced with pushing the right stick up and down, but it feels less responsive as a result. With the touchscreen, my decidedly average running back could rattle off 5+ yard runs for fun. With a controller, we’re struggling for 2 or 3. It’s all very odd. 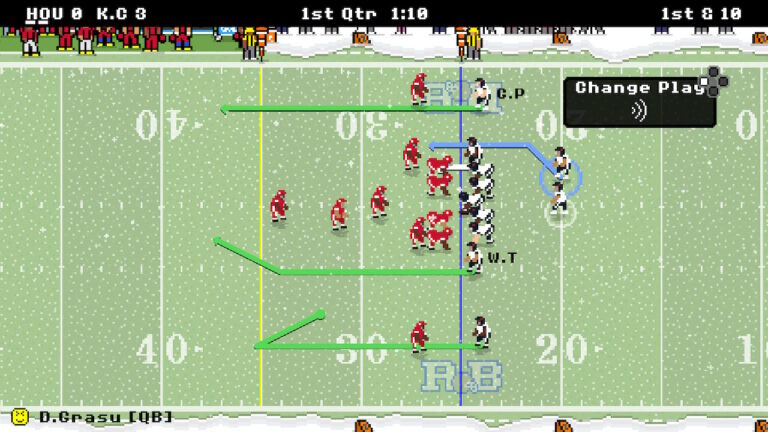 It’s a shame that the controls feel front and centre, because outside of that what you’re getting is the definitive Retro Bowl experience. Load up, tap your name in, and you’re assigned to one of the worst teams in the game. From there, it’s up to you to build them into one of the league’s finest. It’s pretty intricate, too, with a draft system, the ability to trade your players for capital, and handle regular scenarios to influence your player’s happiness. You can hire (and fire) coordinators to improve your players, and spend the coins earned through games on improving your stadium, training ground, and rehab facilities. The more you win, the more coins you earn, the better your players become, and the better chance you have of putting together a winning franchise. You can see why this has caught on.

For one, your on-field game is somewhat expanded. Previously, you exclusively play offensive drives. The Switch version has added kick returns. It’s a minor addition, of course, but it’s a lovely additional dimension that can flip a game on its head, if you play it right. It’s not easy returning a kick for a touchdown, just in real life. But a nice return, and you’re in a good place. Otherwise, by and large, it’s the same experience you’ll find on your phone.

If you’re looking for a bit more of a Tecmo Bowl experience, the Switch version supports both NES and SNES controller support. Sadly, I can’t claim to own either (they’re very expensive, ok?), but I’m reliably informed it plays pretty well, all things told. Speaking of being reliably informed, New Star Games have confirmed that leaderboard support will be added in a later update. When I said that this is a definitive experience, it is just that. 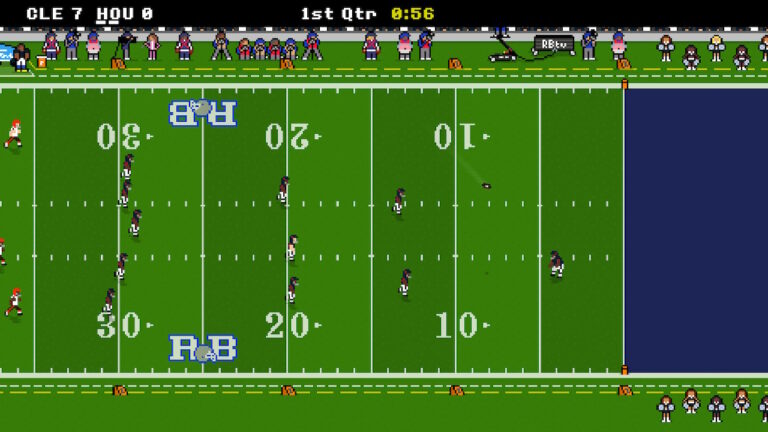 So, with that in mind, is Retro Bowl on Switch worth the pick-up? Well, yes and no. If you’ve no other way of playing it, then absolutely. What you’re getting is a very very fun American Football game, that’ll eat away hours of your time straight away. With the addition of leaderboards in the future, this is an experience that’ll only improve as time goes on. If you have a phone capable of playing it, or already have it? It’s a little more difficult to recommend. By and large, the experience isn’t so different that you need to worry about missing out on anything if you don’t already own it elsewhere.

Regardless, Retro Bowl is the best American Football title on the Switch, bar none. It’s the ideal starter for the Super Bowl weekend, and perfect to pass the time when the long offseason commences thereafter. An easy recommendation.

A copy of Retro Bowl was provided by New Star Games for the purpose of this review. It did not influence how the review was written in any shape of form.

END_OF_DOCUMENT_TOKEN_TO_BE_REPLACED
Get 20% off PFF ELITE and prepare to win in 2019!