nfl week 13: four things to keep an eye on

December heralds the seasons of goodwill to all men. Unfortunately, the NFL never gets that memo because the NFL season is now entering the witching hour. There is no turning back for teams looking to seal their playoff spots. Every game feels like a mini playoff game, and indeed, no one will entertain giving out presents this week.

Two huge divisional matchups headline the card. However, there are stories aplenty all over the Sunday slate. The Cowboys got back to winning ways after they dispatched the Saints. Those two teams get to relax and enjoy the action alongside the fans.

A Story of Two Ex-Patriots

Brian Flores and Joe Judge both accepted NFL head coaching jobs simultaneously. Flores stayed in the AFC East as he undertook the arduous task of rebuilding the Miami Dolphins. Judge joined the New York Football Giants as GM Dave Gettleman tried to infuse the Patriot Way into the Giants’ bloodstream.

In year three, both coaches are firmly entrenched in the job, and fans expected them to make significant steps in 2021. The expectation was high in South Beach as the Dolphins entered this season after enjoying a 10-6 record in 2020. The Giants finished second in the NFC East last season, and a severe splurge in free agency allied to the return of Saquon Barkley raised expectancy levels in New Jersey.

It hasn’t worked. The Giants are rock bottom of the NFC East with a 4-7 record. The offense that Gettleman built isn’t working. Kenny Golladay has been anonymous after his big-money move in the offseason. Rookie Kadarius Toney has struggled to make an impact, and role players Darius Slayton and John Ross haven’t featured much either. The anaemic offensive performances led to Jason Garrett’s firing, although it didn’t change much last week as the Giants’ defense scratched a victory over the Eagles.

Miami’s offense has played at an erratic style all season. Flores’ team took the Panthers apart last week as they ran up the score against Carolina’s strong defense. Conversely, they’ve endured difficult offensive days, such as scoring a paltry 11 points against the Buffalo Bills.

The Giants ground a scrappy win over the Eagles. In the process, quarterback Daniel Jones sustained a neck injury and will miss this game. Veteran Mike Glennon steps into the spotlight for the Giants. Due to the influx of New England methodologies, the Giants defense will resemble the Patriots in their base looks.

Tagovailoa should hold a few clues in his head, as should head coach Brian Flores. The Dolphins are a streaky team, but there are signs that Tagvovailoa is finding himself in the NFL. As for the Giants, Joe Judge is almost certainly a dead man walking. He and his staff have failed to develop Daniel Jones, and Mike Glennon is a stopgap. The Giants were supposed to compete in 2021. In reality, they are trying to keep their heads above water. The Patriot Way has yet to migrate to another team successfully, and these two teams are the latest to exhibit the pains of the Patriot Way.

Ohio Joe Is The Real Deal

In a working-class town like Cincinnati, pressure can be a burden. The Bengals call the Queen’s City of Ohio home. Quarterback Joe Burrow is an Ohio-born-and-raised player. The former first-overall pick returned to his home state and led the beleaguered Bengals last season. The pressure on Burrow was immense, and behind an appalling offensive line, Burrow eventually buckled.

Through 12 weeks of the 2021 season, Burrow is channeling all the expectation and pressure in one direction, the playoffs. The Bengals humiliated the Steelers last week as Burrow stole the show in a virtuoso performance. At 7-4, the Bengals are definitely in the fight for the AFC North crown. On Sunday, Cincinnati entertains the Chargers as Burrow welcomes fellow 2020 NFL Draft sophomore Justin Herbert.

One of the keys for the Bengals is their dynamic running game. Offensive coordinator Bryce Callahan and head coach Zac Taylor are employing some of LSU’s principles in their championship-winning season of 2019. The Bengals are averaging nearly 150 yards rushing per game in the last four weeks. Joe Mixon’s emergence on the ground is helping Burrow hit new heights.

Stylistically, Mixon resembles Clyde Edwards-Helaire. Their physiques and running styles are similar, and the Bengals coaches have realized that to extract the best from Mixon, they need to let him loose outside of the tackle box. Cincinnati doesn’t shrink the formation as the Rams do. They still use the spread offense that helped LSU in 2019. All that allows Mixon to find weak zones and attack the second level a lot sooner than a between-the-tackles runner like Darrell Henderson.

Once the Bengals establish the running game, it negates the pass rush and lets Burrow target one-on-one matchups in the passing game. This offense is perfectly tailored for Burrow; he’s accurate, throws on time, and processes quickly. The Bengals use their run game to establish an island for Tee Higgins and Ja’Marr Chase to win matchups against defenders. It worked perfectly last week.

Brandon Staley’s Charger defense is 30th per Football Outsiders against the run. Staley’s two-high shell and leaving a light box philosophy struggles without Aaron Donald. If Cincinnati can establish the run, Burrow could enjoy another phenomenal day in The Jungle.

No one expected the Bengals to compete for a divisional title in 2021. With big wins over Baltimore and Pittsburgh, the Ravens are contenders. The pressure is on after last week’s dominant performance. If the Bengals respond correctly, the fate of the AFC North could lie in their hands.

The Ravens Could Leave The Steelers On The Brink 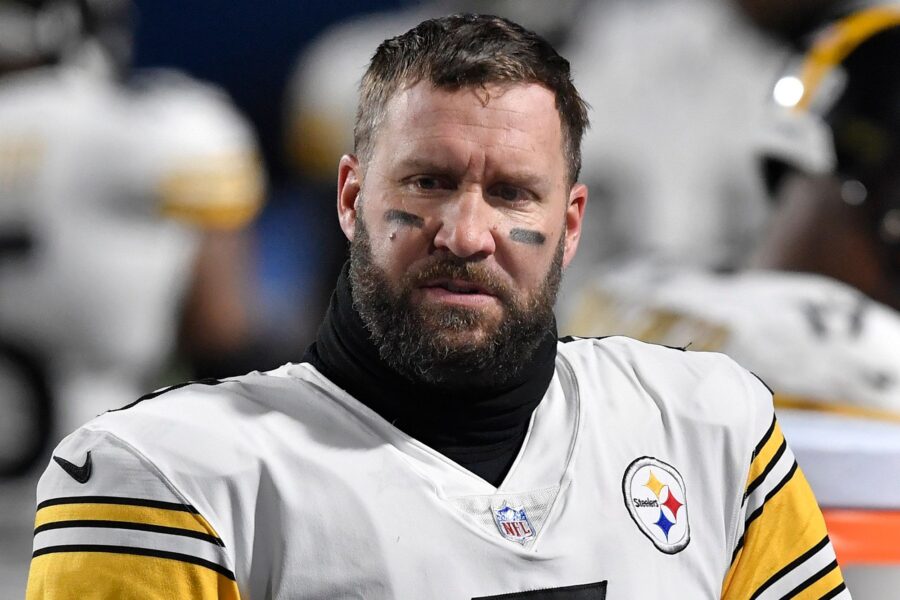 The Pittsburgh Steelers are flatlining at the wrong point in the season. Pittsburgh hasn’t won in their last three, and at 5-5-1, the AFC North is getting away from them. A slew of problems is plaguing Mike Tomlin’s team right now. The defense is currently missing some key starters, and the offense is abysmal.

Ben Roethlisberger’s sad decline is driving all of the offensive struggles. The future Hall of Famer lacks any consistency in his game, has lost all mobility, and the arm strength is gone. The Steelers’ offense is ugly, and the only way they can win is if their defense sustains them. In 2015, the Denver Broncos’ legendary defense carried Peyton Manning to a Super Bowl championship. The Broncos ‘ defense regressed after losing a few key players the following season, and the offense couldn’t bear the burden. It is an impossible tightrope to walk, and the Steelers are finding that out.

The embattled Ravens are still standing on top of the division. Baltimore outlasted the Cleveland Browns last Sunday in a turgid affair as Lamar Jackson returned to action. John Harbaugh’s side wins ugly, seldom have they played at their best level in the regular season. Scratchy wins over the Lions, Bears, Vikings, and Browns blot the Baltimore copybook. The Ravens are streetwise, and they are mentally tough.

The games between these two rivals are often frantic, fractious, and physical. Sunday won’t be any different. The Steelers’ season is on the line, and they need all the help possible. Luckily for Pittsburgh, star pass-rusher TJ Watt is off the Covid list and ready to get after Lamar Jackson. There are concerns about the Steelers’ defensive interior and the ability to stop the run.

Baltimore won’t stray away from their run-heavy power game, and they will attempt to smash the Steelers at the line of scrimmage. On the other side of the ball, the Ravens’ ferocity and aggression could cause the Steelers’ offense more problems. Baltimore won’t hesitate to send pressure; they’ll try and force Roethlisberger to throw deep to win the game.

This game could be another ugly affair. Both teams will meet each other with ferocious physicality and intensity. It could come down to which offense can make just enough plays to make the difference. Roethlisberger looks like a spent force, while Jackson is prone to erratic moments, but he is also capable of magical moments. The Steelers need a win to stay alive. A Baltimore win could leave the reeling Steelers on the brink, and it could spell the end for Big Ben.

The Biggest Game Of The Season So Far

The AFC is a quagmire. Bruised, broken and battered teams lie strewn across the landscape as the season reaches its dramatic denouement. However, one team is emerging out of the darkness to survey the chaos and stake their claim as the AFCs team to beat. Bill Belichick and the New England Patriots are the red hot team in the conference.

A sluggish start has ceded to a rapidly accelerating month of November as the Pats charged their way into contention. A stifling defense, brutal running game, and a quarterback happy in the spotlight have all helped power the Patriots’ run of good form.

Now New England gets to lock horns with the Buffalo Bills under the bright lights of Monday Night Football. The Bills are the perfect metaphor for the AFC; one week, Buffalo looks like a Super Bowl winner, the next, they look like an also-ran. Massive wins over the Jets, Dolphins, and Texans sit alongside ugly losses to the Colts, Titans, and Steelers.

And now Buffalo and Bills Mafia face the one team they didn’t want to play in a prominent spot. The Bills and Patriots were supposed to be on different trajectories in 2021. Instead, they are on the same track at the same time. Last season, Buffalo crushed the Patriots in a Monday night game. Bills offensive coordinator Brian Daboll brilliantly attacked the Patriots’ zone coverages. The threat of the deep ball forced New England to sit soft, and Josh Allen dissected the Pats’ secondary.

The Patriots’ defense has reverted to the classic Patriots’ level of excellence. New England loves to rotate in and out of defensive coverages. Belichick will surely rely on man coverages and then attempt to shift the defensive formations to confuse Josh Allen. The Colts brilliantly did that a few weeks ago, and Allen has found it more difficult this season when defenses defend the backfield.

On the other side of the ball, Buffalo must ruffle Mac Jones. The former Alabama star has demonstrated poise, maturity, and experience. Unlike the other rookie quarterbacks, Jones seems composed pre-snap, and his decision-making is on point. However, offensive coordinator Josh McDaniels is scheming an efficient, well-balanced offense.

The Patriots manhandle teams in the trenches as they try to establish their power-run game. The Bills’ defensive front got smashed by the Colts as Jonathan Taylor ran all over them. New England’s running backs aren’t in the Taylor class. However, they are punishing backs that can churn out extra yardage through contact. Head coach Sean McDermott emphasized the need to stop the run throughout training camp. The Bills must stop the Patriots on the ground.

For New England, they will want to use Allen’s aggression against him. The fourth-year quarterback must make good decisions to keep the ball away from the Patriots’ secondary. Belichick will offer the sternest examination, and Allen needs the answers.

END_OF_DOCUMENT_TOKEN_TO_BE_REPLACED
Get 20% off PFF ELITE and prepare to win in 2019!

NFL DIVISIONAL ROUND SUNDAY: FOUR THINGS TO KEEP AN EYE ON