For the first time since 1995 the Giants failed to send one player to the Pro Bowl. It was that kind of season for New York, who finished 4-12 and had a nine game losing stretch for good measure. Head Coach Pat Shurmur was relieved of his duties after the finale (a home loss to the Eagles) and Eli Manning finally retired, ushering in the Daniel Jones era. Jones, picked 6th overall, had an encouraging year, throwing for 3027 yards, 24 scores and 12 picks in 12 starts. Although clearly a rebuild year (the Giants having traded Olivier Vernon, Odel Beckham JR and Landon Collins pre-season) there was too much pressure on Shurmur to exhibit any kind of positive momentum and progress, which was ultimately not forthcoming.

On the plus side, along with an encouraging start for Jones, Saquon Barkley picked up another 1000 yard season and has cemented his place among the best running backs in the game. Rookie receiver Darius Slayton showed promise too, with 8 touchdown catches and a growing rapport with Jones. A particularly nice moment came when Manning, stepping in for the injured rookie, won his final ever start, a 36-20 victory at home to Miami. A fitting end to a historic career in New York. Let the HOF debate commence…

The Giants were one of three NFC East teams hiring a new head coach in the offseason and the only organisation to go with a first time hire. Joe Judge, 38, is well resumed, having spent the past 11 years working under Bill Belichick in New England and Nick Saban in Alabama. The Giants also hired long time Cowboys head coach Jason Garrett as offensive co-ordinator and Judge’s ex-colleague in New England Patrick Graham as defensive co-ordinator, surrounding him with experience and familiarity in an effort to ease the difficult transition.

On the field the Giants finally attempted to address their perennial offensive line concerns, selecting tackle Andrew Thomas (Georgia) with their first round pick. Thomas was in the conversation for the best lineman prospect this year and may well have gone higher in years without Tua and Joe Burrow courting so much attention. The Giants doubled down and took another tackle in the third round, Matt Peart out of UConn. Exciting second round safety Xavier McKinney will bolster their secondary. In free agency, Leonard Williams signed the franchise tag but wants to be reclassified as a defensive end. Either way, all eyes will be on whether Leonard can produce at a level consummate with his talent. 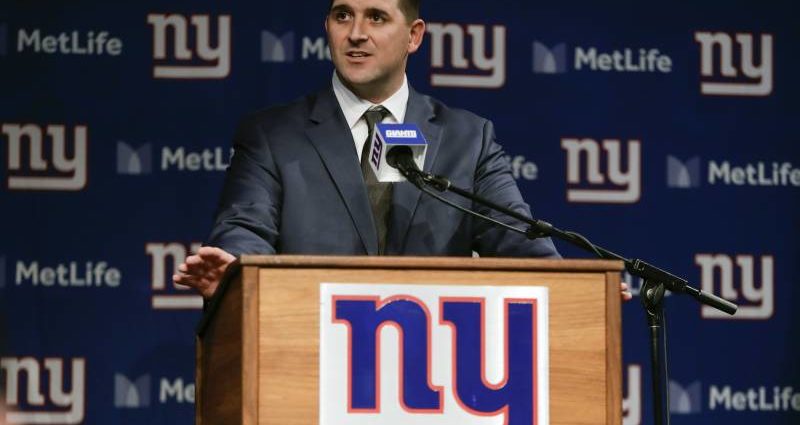 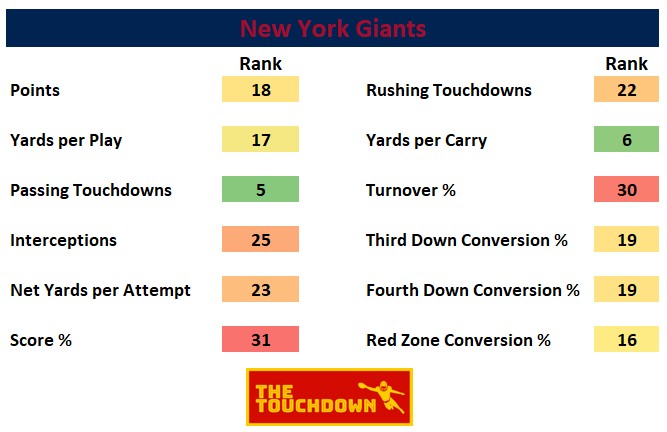 All eyes are on Daniel Jones in his second season as Giants quarterback. Critics and fans of Jones could both confidently cherry pick statistics and point to tape from his rookie year to make their points but a fair overall assessment would be a promising start with a high ceiling. Jones threw a 2:1 TD to interception ratio (24-12) and for over 3000 yards in 12 starts but what impressed most about him was his ability to make spectacular plays under pressure. See his 24 scores here, which led all rookie quarterbacks last year:

Daniel Jones led all rookie quarterbacks in passing touchdowns with 24 last season. The #Giants QB finished the season with a seven-game stretch in which he threw for 18 touchdowns.

Here are all 24 Daniel Jones passing touchdowns in 2019: pic.twitter.com/yhGG0jR6K6

Saquon Barkley had a second straight 1000+ yard season in 2019 even when missing 3 games through injury. The Penn State phenom was exceptional considering the deficiencies in the Giants run blocking, averaging 4.6 yards per attempt despite ranking way down at 34th in the league in average yards before contact per rush (1.8). If the Giants can improve their run blocking, and give Saquon more consistent chances to break to the second level without having to break tackles, Jones and co will benefit hugely, and the difficult second season for the Duke graduate will be much easier.

Jones has some promising receivers to target in the passing game in Darius Slayton, Sterling Shephard, and Evan Engram (whom the team will be relying on to stay healthy). In terms of scheme, expect Joe Judge to lean on his New England roots and mix things up depending on opponent, situation and context: 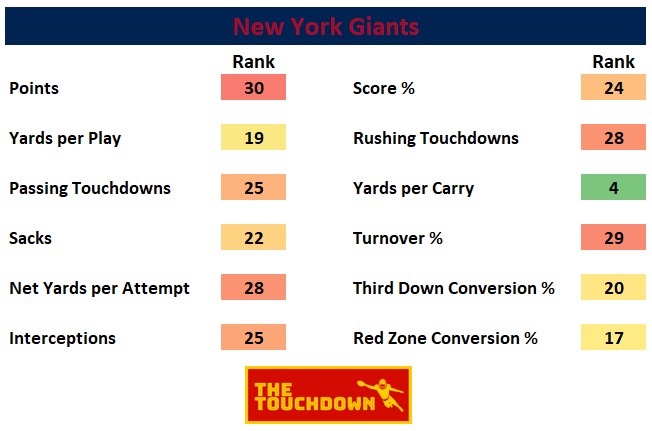 Dave Gettleman has rebuilt the Giants defensive front in recent years and 2020 could, finally, be the year it all comes together for Big Blue. Second year Clemson DT Dexter Lawrence is a breakout candidate, though he wasn’t exactly dormant in his rookie season, having tallied 38 tackles, 2.5 sacks, 1 forced fumble and 3 tackles for a loss. The big question up front is whether Lawrence and ex-Jet Leonard Williams have enough help outside in the form of a consistent pass rush (the Giants only racked up 36 sacks last year). New York will hope that new defensive line coach Sean Spencer and co-ordinator Patrick Graham can have an immediate impact on getting to opposition quarterbacks.

The Giants secondary was bolstered through the draft in 2019 and they doubled down this season. The safety group of Jabrill Peppers, Julian Love and rookie Xavier McKinney is arguably the most versatile in the league. At Cornerback the team were aggressive in picking up ex-Panther James Bradberry, who will start opposite DeAndre Baker. Bradberry has had to deal with a lot of talented receivers whilst in Carolina (Evans, Godwin, Jones, Thomas) and Baker, who struggled early in his rookie season, showed a lot of promise down the stretch. If the safety trio and starting corners elevate come together and play as a cohesive unit, the pass rush might start to find things easier.

Writing yet another Giants verdict of this nature in July feels very much like a case of deja vu. The team find themselves in the midst of another rebuild, or a rebuild within a rebuild, perhaps, and aren’t likely contenders in the NFC East. Similarly to Washington, if their second year QB shines, a few more wins might be forthcoming and the future might start to look a little brighter, but I am not confident that New York, with this roster, win any more than 6 games in 2020 under first year head coach Judge.

JOSH IS A CFB SPECIALIST, LONG SUFFERING WASHINGTON FAN AND BUDDING HISTORIAN OF THE GAME BASED IN LONDON. CHECK OUT HIS ARTICLES HERE AND FOLLOW HIM @JOSHWA_1990 ON TWITTER.

END_OF_DOCUMENT_TOKEN_TO_BE_REPLACED
Get 20% off PFF ELITE and prepare to win in 2019! 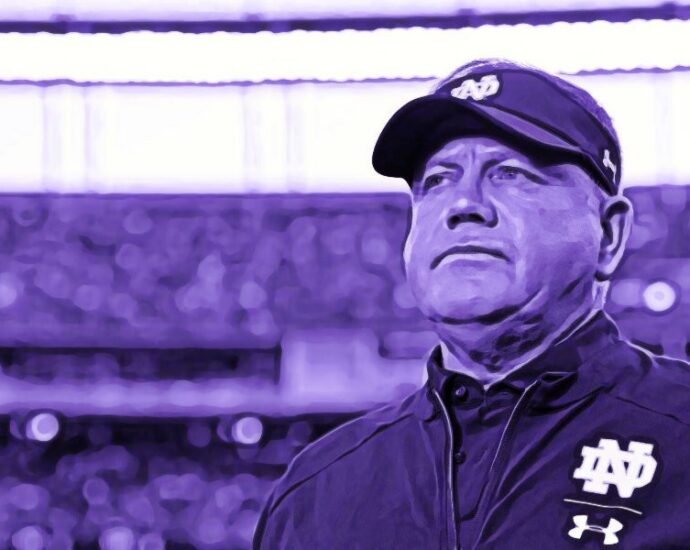 Keys To The Season – Notre Dame 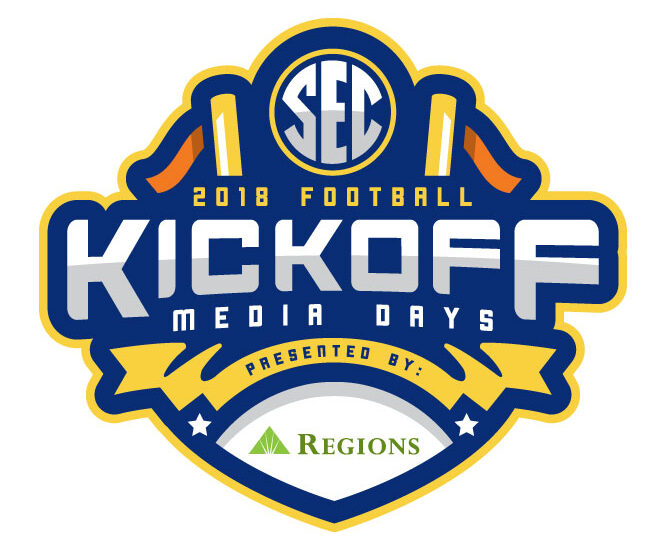 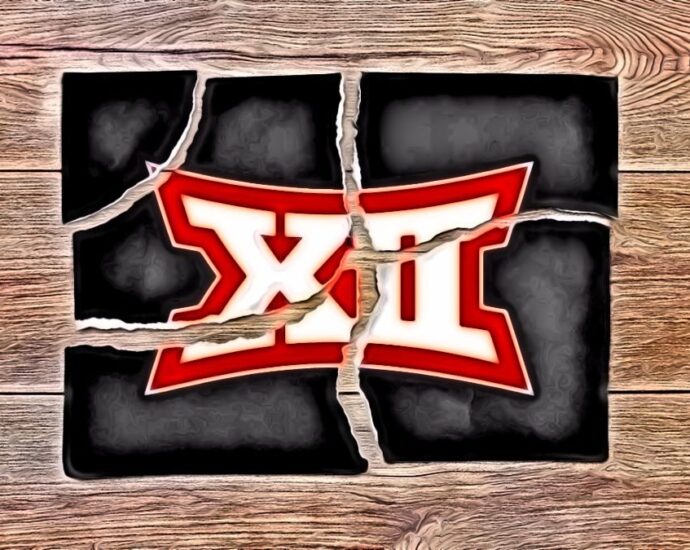 All Aboard The Merry-Go-Round! Texas, Oklahoma Deserting The Big 12 To Set Off The Next Major Conference Realignment?