In the second part of our National Championship player matchup preview we are going to take a look at how the Ohio State Buckeye offense will likely fare against Alabama’s lauded defense. With plenty of talent on both sides of the ball you can expect an entertaining battle when the two face off on Monday night:

This is arguably the marquee matchup of the National Championship game. Two elite college players will battle one another when Patrick Surtain II and Chris Olave go toe-to-toe. The Ohio State offense will be keen to throw away from Surtain, however, in big games you can’t afford to let the opposition shut down one side of the field. At some point Fields will have to test Surtain if the Buckeyes are to triumph.

Surtain knows exactly what it takes to perform at the highest level. He watched his father do it during his multiple Pro-Bowl career. Surtain is no stranger to being a key piece in the Bama defense having carved a role out as early as his freshman year. Likely to declare for the draft this year, Surtain can cement his place as CB1 with a strong performance against Olave and Garrett Wilson.

The Buckeye offense is a different beast with Olave in the fold. They proved that against Clemson, Olave contributing 132 yards and 2 TDs. Olave is a strong route runner and Justin Fields’ main deep threat. It may only be a few plays that Olave gets the chance to expose the Crimson Tide defense, but he will need to take advantage for the Buckeyes to cause the upset.

It may seem strange to pitch Justin Fields directly against Daniel Wright, a safety. However, in the context of the game it makes a lot of sense. The knock on Fields is his ability to work off his primary read. He often stays in the pocket and can stare down his receiver. If he doesn’t get the opening then he often bails, relying on his athleticism as a runner.

Wright has arguably been one of the most improved players in the Bama defense. Early season tape was littered with bad angles and failure to wrap up in the tackle. The back end of the year has been noticeably better. Alabama has a recent history of elite safety play, with the likes of Ronnie Harrison and Xavier McKinney, so Wright has a lot to live up to. It will be his responsibility to cover deep and cut off the big shots Fields thrives on. While also coming downhill to help contain Buckeye running back Trey Sermon.

For Fields, identifying Wright in coverage will be key to finding Olave and Wilson for chunk plays. Ohio State won’t survive off dink and dunk style offense and Bama will be ready to close down the running game. Fields will be hoping to manipulate Wright into some of his early season errors in order to unlock the deep passing game. Wright could be identified as the weak link on this defense, making his performance crucial. 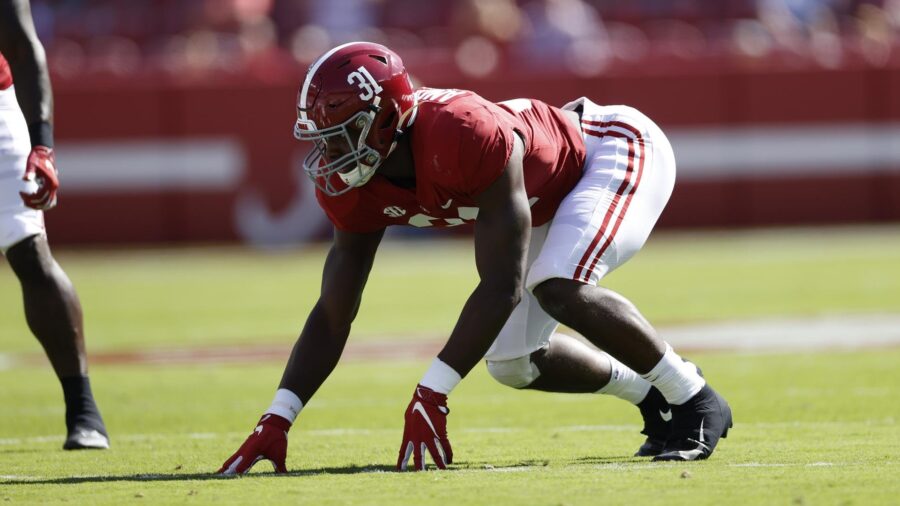 The trenches are always key when you get to the business end of the season. Monday night will be no different. Ohio State can call on some experienced heads and protecting prize asset Fields will be key to their offensive success. While Josh Myers and Wyatt Davis will be tasked with stopping Christian Barmore, left tackle Thayer Munford will need to slow down the edge rush.

Munford isn’t often near the top of the list when discussing the upcoming class of tackles. His tape suggests that is somewhat unfair. Munford has displayed the ability to move his feet well with a solid platform. That’s reflected in his 91.2 PFF grade, which is 7th best in the nation. Turn on the tape and you see him slow down the likes of Jayson Oweh and Kwity Paye. On Monday, he will face Christian Harris and Will Anderson.

It’s difficult for players to make an impact in their freshman year at a program like Alabama. Stacked with talent, there is a pecking order that young players are forced into. With Will Anderson that hasn’t been the case. Contributing 7 sacks and 10.5 tackles for loss in his first year, Anderson has made one of the outside ‘backer spots his own. Containing his speed and power off the edge will be difficult even for a tackle like Munford. Whatever the result, Anderson is just getting started and will be one to watch for at least another two seasons after Monday’s finale.

*For Rory’s breakdown of the Alabama offense against the Ohio State defense, click here:

END_OF_DOCUMENT_TOKEN_TO_BE_REPLACED
Get 20% off PFF ELITE and prepare to win in 2019!