With the College Football season coming to a thriling conclusion, George Somerville brings you all the news from the Ohio State camp in the run up to Monday’s National Championship Game:

The Buckeyes started their media week facing rumours that the team had experienced an outbreak of Covid-19 in their practice facility which could delay or maybe jeopardise the Championship game.

On Tuesday these Covid “rumours” were quickly dismissed by the Buckeyes Athletic Director Gene Smith, who said:

“…[the team] continues to follow the same protocols as we have during the regular season, and we plan to play January 11th”.

So, a non issue, and a welcome one at that! Or so we thought…

However, by Wednesday’s CFB Play Off Media day, the COVID issue still had not been put to bed. So Buckeyes Head Coach,Ryan Day faced two key issues – would Justin Fields be fit to meet the Crimson Tide, and would there be a game to play? The former question a result of Fields’ heroic yet painful Sugar Bowl performance against Clemson, and the latter due to those rumours which just weren’t going away.

So let’s start with the most pressing issue. Would Ohio State be able to field a team on January 11th in Miami? Naturally, it was the first question of Day’s time with the media, and when asked if they were still on track to play he replied categorically:

At a later juncture in the same press conference, Day was asked about the number of players available for the national championship game. Head Coach Day was reluctant to talk numbers, if at all, saying only:

“we’ll have plenty of players.”

However, these rumours are in danger of overshadowing the Buckeyes preparation because when pressed on his lack of detailed response, Coach Day went on to say:

“You can feel sorry for yourself or you can continue to work on and push through. The hard thing is, at the end of the day, most people watch the game and the result is the result. For us, that’s why the story of the season is so amazing to me. We continue to push through despite difficult challenges along the way. We have a new set of challenges this week, and we have to figure it out and go down to Miami and play.”

It should be pointed out that Big Ten Covid-19 protocols were changed so that “players who test positive are not allowed to return to competition for 17 days”. After 10 days of isolation, they must pass a cardiac screening. Then they go through a seven-day acclimatisation period, during which they gradually build back up to full participation. This means that players affected this week, will not be eligible to play.

We all marvelled at Buckeyes’ QB Justin Fields superman-like performance against Clemson. However this winning performance came at a cost with the Buckeyes Quarterback having to be given treatment during the Sugar Bowl and also immediately after it following a brutal hit from Tigers LB James Skalski.

Coach Day was asked about the fitness of his QB1, to which he responded:

“First off, when you saw the way that Justin finished the game, it was remarkable. I thought that was one of the toughest performances I’ve ever seen in person. I leave all of the medical stuff to our medical staff, which is the best in the country. Justin is such a competitive guy, he wasn’t going to come off the field. And that’s just the way he’s wired. You’re going to have to pull him off the field. It was a pretty amazing performance.

And it was good that the next day, his comment to me was he felt better waking up in the morning than he expected. So, we’ll keep working through the week and have a great week of preparation and get ready to play Monday night.”

It was no surprise that Fields’ fitness remained the key topic when the QB1 met the media. Fields responded in very few words when asked about his fitness ahead of Monday’s Championship clash. This is what Fields had to say:

“I’ll be good by Monday night,”

He did however go onto elaborate a little when asked to explain his comments (on medical treatment) immediately after the Sugar Bowl. Fields said:

“Yeah, I think what I said after the game was kind of taken out of context. I just want to make one thing clear, it’s that I have my full trust in the trainers here at Ohio State and Dr. Borchers.

I wasn’t, you know, I guess hesitant on taking anything that they would give me, but I was just trying to do whatever I could do to get back on the field.

I think those guys handled it the way I would have wanted it to be handled.

I just put my full trust in those guys and I see how they deal with guys here, and I have personal relationships with all of them. I just don’t want anything I’ve said in the postgame interview to kind of get taken out of context and to be like, Oh, they just shot him up and sent him back out there.

No. It wasn’t like that. I think they did a full, I guess, analysis of my injury and how it was, and they thought — they did what they thought was best. Yeah, I was fully comfortable with that. I’ll be good come Monday night.”

Fields was then asked, “You don’t think you’ll be affected at all?” The star doubled down:

“I’ll be good by Monday night”.

As you will note if you read my Crimson Tide diary, one of the more intriguing storylines coming out of the Alabama camp was the prospect of wide receiver Jaylen Waddle returning from what was expected to be a season ending injury. As we now know, ‘Bama head Coach Nick Saban has confirmed that Waddle has returned to full practice and will be a “game time decision”. So did this come as a surprise to the Ohio State Buckeyes? Well, no; they were planning on a potential Waddle comeback.

Buckeyes Defensive Coordinator Kerry Coombs addressed the media on Wednesday and, given his defensive responsibilities, the topic of the Alabama offense with or without Jaylen Waddle was top of the agenda. Coombes had this to say of Waddle back at practice,

“I think you absolutely have to prepare like he’s going to play,” Coombs said of Waddle. And I would promise you that he’s an extraordinary athlete, extraordinary receiver. He played five games, and you watch the tape and he’s a special player.

You have to also acknowledge when you’re playing teams that are really, really good at what they do,” Coombs said. “And they are and we acknowledge that. So we understand the challenge that’s ahead of us and we’re preparing to play.”

Without doubt one of the great stories to come out of the Sugar Bowl win over the Clemson Tigers was the truly impressive performance of running back Trey Sermon. So it was no surprise that Sermon was in great demand on Media day.

In one of the more humorous moments of the Media day, the first questions asked of Sermon was to give his thoughts on that “smirk” moment, which was caught on tv and became a Twitter phenomenon: 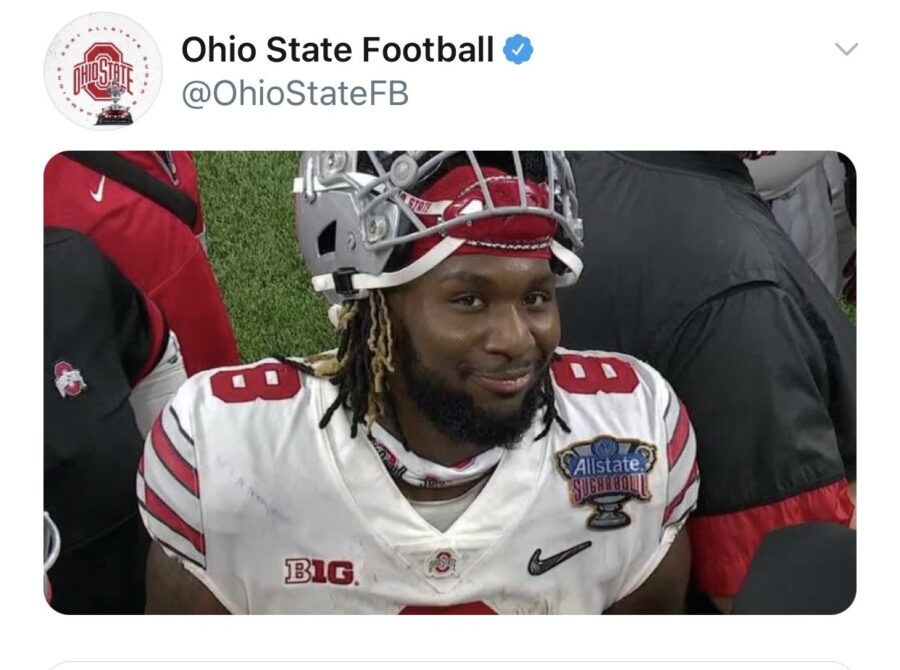 A laughing Sermon had this to say about the moment:

“Just looking at the replay and the call got reversed, I kinda smirked because – I mean – I didn’t really think I was down and when I saw my knee hit the ground I was kinda like, man it barely touched it. But hey, it was funny”.

After the year that the Buckeyes had, Sermon was asked what it meant to be playing for a National Championship. Sermon responded by saying this,

“It’s very special. This team, this program has been through so much and to have the opportunity to play on such a big stage. It means a lot to us. We’ve been through a lot. We fought just to play this season and to be able to get the job done and to make it to this level – it means a lot to us. We know the job isn’t finished yet, but we’re excited to get the opportunity”.

And finally, asked about Dabo Sweeney ranking the Buckeyes at #11 and Nick Saban ranking them at #5, Sermon said this about what the Buckeyes have to prove in this game:

“We have a pretty big chip on our shoulder. We just feel like we’re one of the best teams in the country and we just gotta go prove that every time we step on the field. We all believe in each other”.

END_OF_DOCUMENT_TOKEN_TO_BE_REPLACED
Get 20% off PFF ELITE and prepare to win in 2019!