Stop me if you’ve heard this one before folks. Coming off an unexpectedly impressive 2018 season, hopes were high for the six or seven Chargers season ticket holders last year. Not only had they gone 12-4 in the regular season & narrowly missed out on taking the AFC West, but they’d travelled to Baltimore in the playoffs and stymied a Ravens offense that was on fire with Lamar Jackson at the helm. Sure, they got waxed by The Patriots a week later, but there was no shame in that. Nope – with a killer defense and a strong running game, the scene was set for a fairytale ending in Philip Rivers’ (likely) final season wearing powder blue.

There was only one problem – this was The Chargers. And we all know the Chargers can’t have nice things. One by one, the problems mounted. Melvin Gordon held out for the majority of the year in pursuit of a new deal – he never got one. The all too familiar injury bug hit, with Derwin James, Brandon Mebane, Nasir Adderley, Justin Jackson, Hunter Henry, Russell Okung, Mike Pouncey, Adrian Phillips and Michael Badgley all out for extended periods. Austin Ekeler shone in Gordon’s absence but couldn’t carry the load, and things seemed disjointed when Gordon returned. And Phil Rivers was even more Phil Rivers than normal, throwing 20 picks to just 23 TD’s. The Chargers went 4-7 before their bye week, with all seven defeats being by a touchdown or less. They would win one more game before the season ended.

Regardless of 2019 record, this was always going to be a season of change for The Chargers. Philip Rivers was widely rumoured to be on his way out, and he duly departed after becoming the greatest quarterback in franchise history. In fairness the changes to the offense began before then, with offensive co-ordinator Ken Whisenhunt fired in late October. QB coach Shane Steichen took the reins and mildly increased output from 350 yards per game to 384. He continues in the role in 2020.

An unusual offseason for The Chargers saw them be more aggressive than ever before under GM Tom Telesco. The offensive line finally became a priority, with the addition of pro bowl tackle Bryan Bulaga coming in from Green Bay. He’ll be joined by guard Trai Turner, who was acquired via a trade with Carolina for Russell Okung. This was seen as quite the coup for Telesco, who also spent money on experienced DB Chris Harris and run stuffer Linval Joseph. He didn’t stop there either, opening his chequebook to re-sign Austin Ekeler to a team-friendly deal and franchise tagging Hunter Henry who was expected to leave.

In the draft, The Chargers made a splash picking quarterback Justin Herbert fifth overall. A solid class, Telesco also added linebacker Kenneth Murray in the first round and role players later on, including running back Joshua Kelley and wide receiver KJ HIll.

There were some obvious losses too. Rivers left as discussed for one last swing at a ring in Indy. Melvin Gordon didn’t get his payday & went to Denver to exact his revenge twice a year. And Adrian Phillips moved on to New England in free agency too. But on the face of it, this roster looks much stronger. 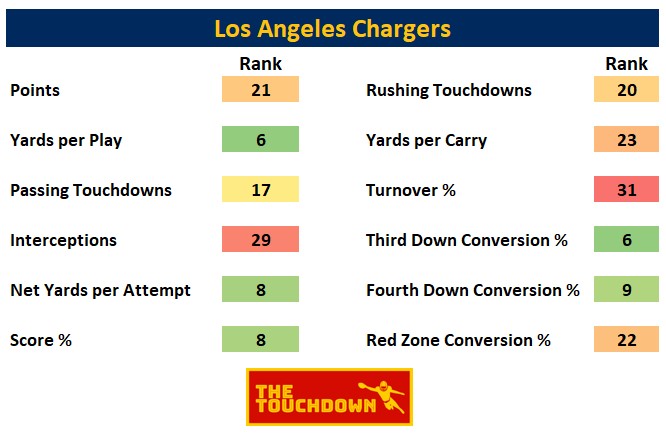 Anthony Lynn can certainly be described as a fan of Tyrod Taylor. The former Bills & Browns starter played backup to Rivers last season, and has had success with Lynn before, getting Buffalo to the playoffs for the first time in eighteen years. But his grip on the starting quarterback job will likely be a short one – you don’t draft QB’s fifth overall for them to ride the pine. The Chargers will be hoping that Justin Herbert proves too good to be kept on the sideline. But an even more likely scenario, harsh as it is, is that Taylor plays his way out of a job and Herbert is forced to take his lumps early. Transitions to a rookie quarterback are rarely smooth, and unless Herbert hits the ground running it could be another tough year for the passing game.

Having said that, he should have a better chance at survival behind this revamped offensive line. The Chargers can legitimately boast of three pro bowl calibre linemen in Bulaga, Turner & Pouncey – something Rivers never got to experience in sixteen seasons. Furthermore, Lynn’s desire to run the football more should be back to 2018 standards with the removal of Gordon. Austin Ekeler is much more productive when he’s used outside the tackles and as a pass catcher out of the backfield. With rookie Josh Kelley likely to be the workhorse up the gut and Justin Jackson getting carries too, expect this committee to be much more potent than last year.

As far as weapons in the passing game go, Herbert cannot complain. If they can avoid persistent injury troubles, the trio of Keenan Allen, Mike Williams and Hunter Henry are as good as most in the league. Don’t sleep on rookie KJ Hill either folks – the leading receiver in Ohio State history brings excellent hands as a slot receiver, and should impress enough to get on the field and have Allen line up outside. 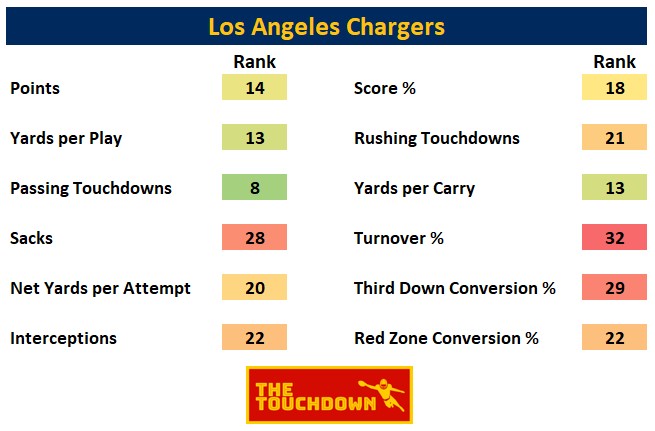 On paper, the Chargers defense is impressive. Over the past few offseasons Telesco has provided more talent for defensive co-ordinator Gus Bradley than he could ever have expected.

It starts up front, where this unit boasts one of the best pass-rushing tandems in the NFL. Joey Bosa just became the higest paid defensive player in the NFL with a five year, $135m deal. He’s joined by Melvin Ingram, who is in the final year of his contract and will be looking for a pay day of his own, with the Chargers or elsewhere. With 72.5 sacks between them in the last four years, The Bolts will be expecting big things once more.

One guy who is expected to step up this season is defensive tackle Jerry Tillery. After overcoming fitness problems of his own through his rookie year, the former Notre Dame standout will look to establish himself as a starter. Playing alongside Bosa, Ingram & run stuffer Linval Joseph should allow him get into the backfield and cause havoc.

Rookie Kenneth Murray is likely to come in and be the lynchpin of this unit. As physical as Denzel Perryman is, it’s been a while since the linebacker position has looked this robust. Murray has already been training as if to call plays. With Perryman, Drue Tranquil & Kyzir White helping him, the vulnerability of this defense looks to have gone.

The last word of course has to be about the secondary. Derwin James’ return will feel like an extra player, and The Chargers will hope they can squeeze two years out of the longtime Bronco Chris Harris. If Casey Hayward can return to peak form, Desmond King takes the next step and Nasir Adderley finally makes his mark, then surely this defense – THIS TEAM – is playoff bound?!

Well, no. The Chargers likely won’t be playing football in January despite the optimism I showed above. For one, the biggest question mark of this team revolves around the most important position in the sport. I can foresee a scenario where Lynn has too much faith in Tyrod, and ends up keeping him in situ too long. Not only that, but for all his natural talent and impressive pre-draft workouts, there are questions regarding Justin Herbert’s leadership, maturity and composure. Many Chargers fans don’t know how lucky they are to have had Philip Rivers for the last fifteen years. For all his warts, he was a bona fide QB in a league that doesn’t have enough of them. Herbert has big shoes to fill, and it might take some time.

Secondly, they have The Chiefs in their division. And I would argue that the rise of The Broncos & Raiders is also not to be ignored – this division looks to be very tough, and despite the extra playoff berth I’m not convinced the Chargers will win enough games in the AFC West to progress. Give Herbert a year under his belt and things should be different. Call me a pessimist, but I’ve seen this show too many times before…

And if all of that is wrong? If Herbert is a superstar from day one, the competition falls to pieces, and the West is there for the taking? Well, you can bet your last dollar The Chargers will find a way to grab defeat from the jaws of victory.

It’s The Chargers folks – that’s just what they do.

END_OF_DOCUMENT_TOKEN_TO_BE_REPLACED
Get 20% off PFF ELITE and prepare to win in 2019!