Finding the right time to acquire or move on from assets in dynasty leagues can be one of the hardest elements to judge. In the ever-changing world of the NFL even hesitating for a day or two can be costly. Trusting your evaluation of a player can be scary, but it can be the difference between success or years of fighting to repair a gaping whole in your roster.

In this series our dynasty expert @FFAdvice19, will take a look at some players that you should be looking to buy as we head towards the 2020 NFL season. First up in the spotlight is the Philadelphia Eagles tight end Dallas Goedert.

Zach Ertz has been at the elite level of pass catching tight ends for seven seasons now in Philadelphia and has been a favourite target of the QBs over that period. Third-year tight end Goedert saw his role in the offense expand in his second season and enters 2020 hoping to continue his early success and elevate into the level of usage we have seen Ertz getting. The signs are extremely favourable for the man from Britton, South Dakota, following 87 targets in 2019 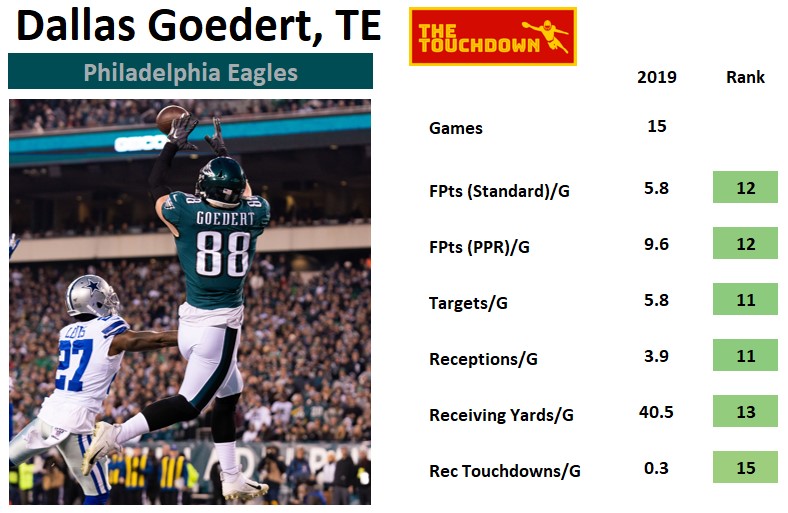 The Philadelphia Eagles have been one of the unluckiest teams to catch the injury curse over the past few seasons, with key injuries to star players such as QB Carson Wentz and WRs DeSean Jackson & Alshon Jeffery. Jeffery has now missed three or more games in four of the last five seasons and enters the 2020 season on the injured list with his early season status in serious doubt. The Eagles WR group looks set to enter the season with speedsters Jackson and Marquise Goodwin, Greg Ward, JJ Arcega-Whiteside and rookie Jalen Reagor.

Jackson hasn’t played a full NFL season since 2013 and only managed three games in 2019 before core muscle surgery ended his season. Free agent signing Goodwin hasn’t fared much better, having only played in nine games in 2019 before being placed on IR with foot and knee issues. The addition of Reagor adds some much-needed talent, but rookie wide receivers are far from a sure thing.

Looking a bit deeper into the WR group you find a shallow pool of talent that couldn’t help Wentz much down the stretch in 2019. That lack of depth was a big part of the reason their season ended in the Wild Card round against Seattle 17-9.

This brings us to the underappreciated stars of the Eagles offense, the tight ends. Ertz and Goedert both look set to feature heavily in this Eagles attack once again in 2020. Both finished as top-10 fantasy TEs in 2019 (Ertz #4 and Goedert #10) and are favoured receivers of Carson Wentz.

The Eagles as a team targeted the Tight End position far more than any other in 2019; a staggering 235 targets which was 55 more than the next closest the Baltimore Ravens. This was not a one off either as they led the league in tight end targets in 2018 too, this time 210 targets, a full 35 ahead of Kansas City in second. If there are more injuries in the WR camp to these already injury prone receivers then these two star tight ends will soak up the workload and further cement themselves as top Tight End targets for your teams.

Ertz is entering his 8th season as an NFL player and turning 30 in the process. This isn’t old for a tight end and Ertz likely still has a few good years ahead of him. He signed a five-year deal with the team back in 2016, which runs until 2021. In all likelihood he will become a free agent at this point given the amount of money he will likely be asking for. The team can get out of Ertz contract with just a cap hit of $7.5million in 2021 which may be an option they weigh up with the questions surrounding the NFL salary cap.

Goedert looks to be going nowhere other than upwards and there has been plenty of praise for him within the hierarchy in Philadelphia as well. Back in December in the crucial playoff-or-bust clash with the Dallas Cowboys, Goedert was featured heavily while Ertz was banged up and was the key to a 17-9 victory, hauling in 9 receptions for 91 yards and a touchdown, demonstrating his big play ability. The sky really is the limit if he is cast into the TE1 job.

What is the cost right now?

Well he is being drafted as the the 10th Tight end off the board in Dynasty start ups. If I am building a team eyeing up 2021 onwards for my championship run, then I am heavily targeting Goedert owners with trade offers. If you do not act now his value is going to skyrocket and the cost will be too high. Consider me all-in on Goedert.

ALASTAIR, A DIE-HARD BUCCANEERS FAN FROM NORWICH AND UP AND COMING FANTASY CONTRIBUTOR CAN BE FOUND ON HIS TWITTER PAGE WE ARE DYNASTY FOOTBALL (@FFADVICE19)

END_OF_DOCUMENT_TOKEN_TO_BE_REPLACED
Get 20% off PFF ELITE and prepare to win in 2019!