No team in the entire NFL suffered such a transformation in their future direction from September to February than the Carolina Panthers.

After finishing 7-9 in 2018 with all-world running back Christian McCaffrey and a strong rookie season from DJ Moore, there was hope that Cam Newton would come back from shoulder surgery to put the offense back over the top and return the team to the play-offs.

By Week 3, Newton was injured again with the Panthers season almost dead at 0-2. By November, an undrafted free-agent QB (Kyle Allen) had led the Panthers to four wins out of five and the Newton era was over, on IR with a play-off push on…

…THAT was the last win of the season.

By a month later, the almost decade long tenure of Ron Rivera was over and quite possibly the biggest rebuild in franchise history could begin.

There was a school of thought that ever since he bought the Panthers in 2018, David Tepper was always biding his time, waiting for the opportunity to put his stamp on the franchise.

Well, there is no question that this is his team now. New coach (Matt Rhule), New quarterback (Teddy Bridgwater) and a new direction. If I was GM Marty Hurney, I would be worried that I would be next on the chopping block.

No change was more galling to the people of Charlotte though than the enforced one they will see at the heart of their defense. Luke Kuechly’s retirement at the age of 29 leaves a gaping hole as one of only two true elite level players on the entire roster, hence why it became so important to lock up Christian McCaffrey long-term on the other side of the ball.

There is no question that there is a belief that with the offensive-orientated new head coach in Matt Rhule, allied with LSU passing game guru Joe Brady as his Offensive Co-ordinator, that they can fix the offense. Showing how much faith they had in their scheme and the ability to fit their current talent to it that they drafted entirely on defense. 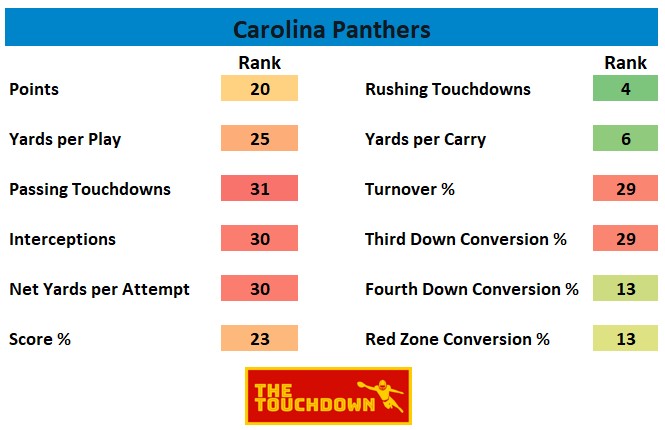 Nothing shows up how this offensive scheme has changed during the off-season than with the change behind centre. Given his history, bringing Cam Newton back would have been the biggest boom-or-bust move in the entire league this season.

In contrast, Teddy Bridgewater might have the lowest ceiling of any of the free agent quarterbacks that floated around in free agency. The Panthers know exactly what they are getting, he is basically the next generation version of Alex Smith and that is fine for what this offense wants to do.

On that note, we come to the leader of this offense in McCaffrey. Despite being overrated by most as a between the tackles runner, especially against good run defences (68yds on 38 carries against the Buccaneers in 2019), he is still worth every penny that the Panthers have given him. Why? Because, he does things in the receiving game that no other back in the league can do and that is perfectly suited to this offense. There is a distinct possibility that McCaffrey could end up in the top 10 for receiving yards in the entire NFL this year.

Meanwhile, DJ Moore is one of the best run after catch wideouts in the league. Having hit a thousand yards receiving in his second season, with a quarterback and scheme that is going to fit that skillset perfectly, he may even increase his production further.

The number one key to if this offense will truly work though is if Russell Okung can stay fit. Now, given his history, that is a pretty major IF. While on the face of it, trading a 31-year old, permanently injured left-tackle for a considerably younger Pro-Bowl calibre guard is a huge drop-off, there is one major reason why it makes sense for the Panthers and that reason is Greg Little. While he was drafted to play at left-tackle in 2019 there was no question that he was raw and woefully exposed prior to getting injured.

If they persisted with Little there this year, Bridgewater would be a sitting duck. However, he can easily do a job if kicked inside to guard, and at the age of 22 has time to learn off a guy like Okung. There is no reason he cannot end up back at tackle down the road. Which, at the end of the day, is what is the plan in Charlotte, trying to build something over the next few years. 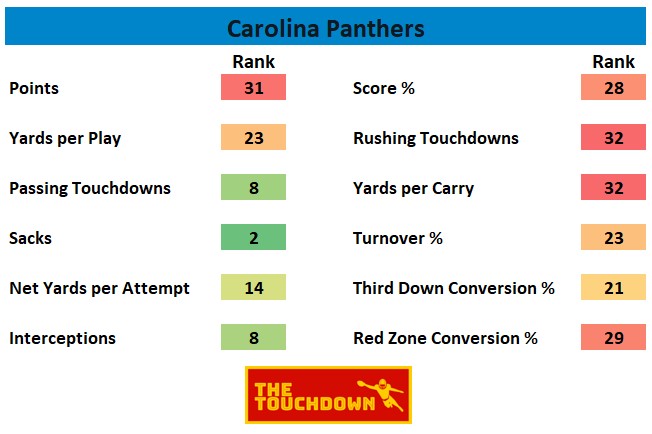 There is a reason that the Carolina Panthers used all seven of their picks in the 2020 NFL Draft on the defensive side of the ball. They were abjectly bad last season, as shown by their 31st ranking on Pro Football Reference. Their main saving grace was in at least having one all-world type player to build around in Luke Kuechly.

Take Kuechly out of that and suddenly their defense looks even worse. It is no wonder that they used all seven picks to fix that side of the ball. In fact, the biggest surprise is that they felt they didn’t actually need to use a draft pick on an off-ball linebacker to replace Kuechly directly.

However, there are plenty of pieces that have been added that Panthers fans can start getting excited about on this unit. Up-front, Derrick Brown is one of the best interior pass-rushers to come out of the draft in recent years. Another name to get excited about is a late-round flyer that his college coach wanted to bring in from his old program, Brayvvion Roy. Meanwhile, in the secondary, the one thing you can’t teach is athleticism and both Jeremy Chinn and Troy Pride have that in buckets.

However, placing so much attention on rookies is never a sure bet, and this season more than most; with reduced practices and less time to transition to the NFL game may mean there is a very bumpy start ahead in the short-term though. Therefore, the rookie that might be able to have the biggest impact for this team is the one that has been playing competitive football most recently and that is the guy who almost certainly would have won defensive player of the year in the XFL, safety Kenny Robinson.

What will help those rookies hugely is if someone really steps up to replace Kuechly as the defensive leader on this team. The one guy that could potentially do that is Brian Burns; the second-year player who got seven and a half sacks as a rookie. If players like Brown and Yetur Gross-Matos can adjust quicker than expected, then Brian Burns could end up with double-digit sacks and emerge as a top 10 pass rusher.

There is enough talent on this team that Panthers fans certainly shouldn’t be worried about a period in the doldrums. However, there are just too many variables to predict immediate success. It’s hard enough to get an such an instant turnaround in the NFL at the best of times, let alone in a shortened off-season schedule. This is hardly the season to do it.

As with the rookies on defense, Matt Rhule and his completely new coaching staff, with very little NFL experience, will have more struggle dealing with implementing their system than most. That is not to say they will not turn out to be successes at the NFL-level, but it is very unlikely to show itself in 2020.

Add to that the stability within the division where the Saints have seen very little change and the only major change on a talent-rich Buccaneers squad is replacing Jameis Winston with a quarterback that isn’t going to give the Panthers defense over a third of their entire season’s interceptions in one game, the route to a winning season is not one that will be completed in just one year.

END_OF_DOCUMENT_TOKEN_TO_BE_REPLACED
Get 20% off PFF ELITE and prepare to win in 2019!