As the first quarter of the 2019 season winds to a closer, Willo tells us who's up and who's down on the NFL stock market.

It’s the end of Q1, and, oh boy, business is booming. We’re selling high, we’re buying low. The past four weeks have been a roller coaster, but, thanks to me, you’re all the wiser for what you’ve seen.

Fret not, we’re not getting out of the game just yet. Let’s do some end of quarter analysis, and attack Q2 with the same tenacity as before.

Not even I know what I’m saying anymore.

I don’t think a side that wins basically all the time is ever really an oversight when discussing the contenders, but the hype surrounding the New England Patriots was surprisingly low this season. Maybe we’re all just used to it at this point, or maybe the conversation was so dominated by the Saints trying to legally overturn their Championship game loss. But the talk surrounding the Patriots basically started and ended with “they’ll probably be up there”.

What we’ve seen over the last four weeks, however, is that their defense has shown up this season. Four games into the season, and they’ve only given up one offensive touchdown. The slate of games has been favourable, but, until Sunday, you had to look back to January, in the AFC Championship game, for the last time the Patriots defense had given up a touchdown.

In an afternoon where their offense struggled against a plucky Bills outfit, the defense stepped up in a big way. Four interceptions, and one huge stop right at the end, delivered the win back to Foxborough. The Patriots sit 4-0, and unlikely to be seriously challenged again until at least week 9. Their defence may well find themselves at the bye having given up single digit touchdown numbers. That’s crazy impressive. 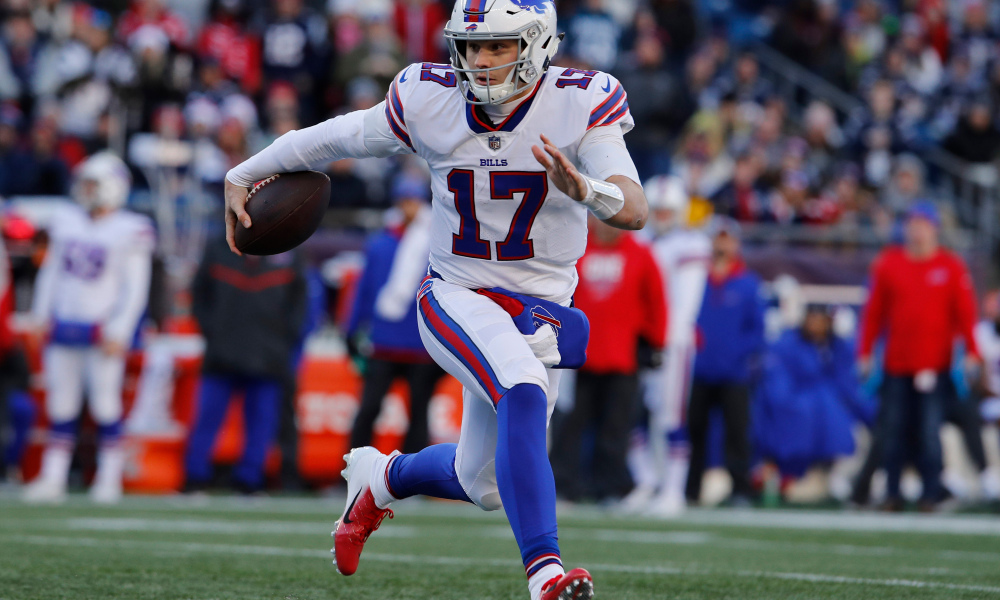 Speaking of the Buffalo Bills, I can’t stress enough how impressive that loss was on Sunday. What a strange sentence. Let’s try again. The Patriots were a 7 point favourite going into the clash at New Era Field, despite the Bills sitting at 3-0, alongside the world champs.The 6 point loss doesn’t truly reflect the story of the game, with (as I said, like, a minute ago) the Patriots leaning heavily on their burgeoning defense to get the job done.

When it comes to games like that; divisional match ups, where one play can change everything, all you need to do is hang in there. Despite turning the ball over 4 times, and even giving up a special teams touchdown, the Bills did just that. They had the chance to win the game right and the end, and, despite coming up just short, ought to take a lot of positives from what they saw.

Listen, I still don’t have total faith in them. Josh Allen strikes me as a guy with a case of the Bortles, and their offense is simply not dynamic enough to make me seriously believe they can be a contender in this Conference. However, with winnable ties against the Titans, the Dolphins, and Washington three of their next four games, they might just be primed for a postseason run.

I was pretty critical of Jameis Winston in the first edition of this report, but I have to give the guy credit where it’s due; he, and the Tampa Bay Buccaneers, might well be legitimate in 2019. 55 points whoever you face is impressive, but it’s even more so when it’s on the road, against last seasons Conference champions. For four quarters, the Buccaneers matched the Rams, near enough, drive for drive, throwing up one of the most unexpected results of the weekend.

I said, in that first week, that Bruce Arians is a superb coach, and I wasn’t kidding. The guy knows his stuff. The NFC South is still, somewhat, up in the air right now, with two of its four starting Quarterbacks missing time for a good few weeks yet, and the Falcons being…we’ll get to that. The Buc’s have a real opportunity to take control of the division with back to back South clashes on the road to New Orleans, and at home (not home(London)) to the Panthers. The perennial underachievers may well be about to reach their potential

3-0 is a really good start, especially in a division as tight as the NFC North. But you all bought into the Green Bay Packers way too easily, way too quickly. A tough, tough win against the Bears lead to a comfortable victory over the Vikings, and a trouncing of the Broncos. The common thread? All three of these sides are pretty bad. The Eagles are not pretty bad. They came to Lambeau Field and put up 35 points, the first team to do that in 5 years.

Again, 3-1 is a really good start. They’d sooner be there than 1-3, for example. But the difficulty in which the offense operates ought to worry cheeseheads worldwide. The side does well enough in the first half of games, but having failed to put up more than 10 points in any second half over the past 4 weeks, it’s clear oppositions are figuring out Matt LaFleur’s offense faster than he has to react to it. I wasn’t keen on the hire when it went through, and I’m less so now.

It isn’t going to get easier for the Packers. Over the next four weeks, they face the Cowboys, Lions, Raiders, and Chiefs. It’s tough to make a case for them winning at least two of those games, and the other two could be a toss up (I’ll let you decide who I’m referencing). Things might start to head south fairly quickly over in Wisconsin. 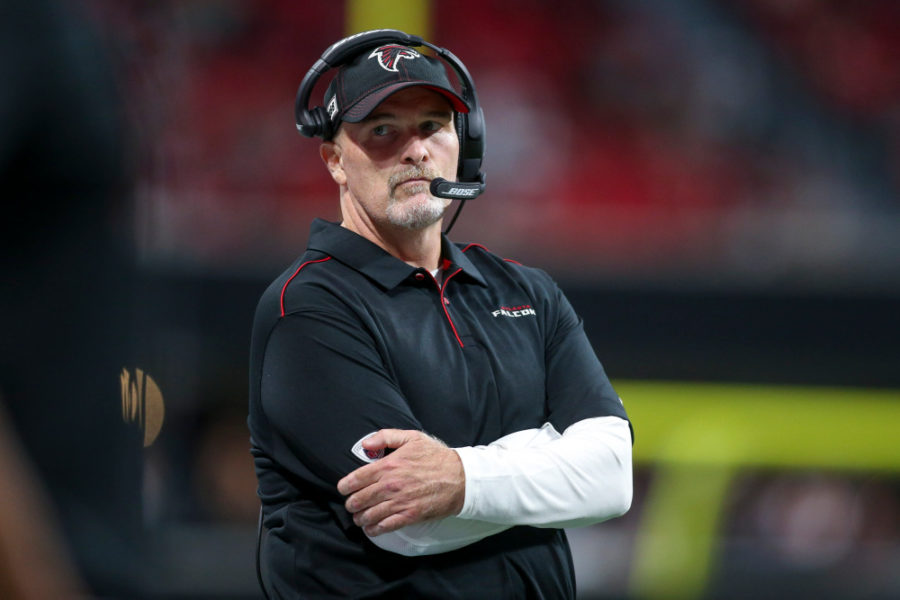 I’m an Atlanta Falcons fan, and have been for 10 years now. I’ve seen some unbelievable highs, and some soul crushing lows. Of everything that comes with following this team, this might be the most difficult thing I’ve written: Dan Quinn, you’re breaking my heart.

The guy is a genuinely likable personality. From day one, he told us his teams would be “fast and physical”. Over the past four years, “the brotherhood” has developed into a side that looks like it genuinely cares for and supports each other. The Falcons, on paper, should be one of the better sides in the Conference, bordering on a playoff run. Which is why it is all the more tragic that they find themselves 1-3, and starting in the face of another lost season.

The problem is that there is nowhere left to turn when looking for excuses. Last season the Falcons lost half their players to the injury bug, scrapped their way back into contention, and subsequently threw it away thanks to a combination of overconfidence and incompetence. This season, having fired everyone, Quinn’s side looks lost on both sides of the ball. The side is hemorrhaging yards on defense, and simply failing to convert yards into points on offense. It’s a mess, and one that came to a head against a really average Titans side at home. 24-10 loss. Jesus.

The seat was already warm going into 2019, but the heat has been put up to high after that. Quinn will likely see out the season, regardless of how things go. But we won’t see him under the headset in 2020 unless he turns things around, and quickly. Luckily, a trip to Houston is up nex…oh God they’re going 1-4, aren’t they?

To round us out this week is the side currently winning (or losing, depending on which way you look at it) the race to the first overall pick. It’s the Cincinnati Bengals! Believe it or not, I actually thought the Bengals were going to be alright this season. A new coach for the first time in a thousand years, and a pretty alright offense, made me believe they would play teams close, even if they wouldn’t turn up many trees this season.

In week one I was somewhat proven right. Seattle is a really tough place to go, and they ran them close. A one point loss, one they probably should have won, made me believe they could push for 6 or 7 wins. Then the avalanche of conceded points came. 41 at home to the 49ers, 21 to the Bills, and, on Monday night, 27 to Mason Rudolph’s Steelers.

Thing is, they didn’t even look like they could win. 3 first quarter points to give them the lead, and the entire team checked out. Zac Taylor was a pretty questionable selection for the Head Coach role at the time, and it’s one that just isn’t paying dividends right now.

Things might be better this week, as they host the equally hapless Cardinals, but I wouldn’t expect the good times to return. The Bengals are bad. Move them on while you can still get something for them.

END_OF_DOCUMENT_TOKEN_TO_BE_REPLACED
Get 20% off PFF ELITE and prepare to win in 2019!