The sixth week of the 2019 NFL Season has passed, and the playoff picture is becoming clearer by the day. Teams that are bad are proving to be really bad, so forget about them. Seriously. It’s better for your well being if you just stop watching the Falcons, me. Just stop. Please.

Sorry about that. Anyway. Yeah, the playoff picture is getting clearer. Fans of teams that don’t disappoint you on a yearly basis are already plotting the season ahead, totting up how they can navigate their way through to January football.

That isn’t what I do. I just kinda look at things that are good and bad, and tell you why. This is who I think is good and bad this week.

How’s this for reversing the script? This is something that is, unfortunately for me, going to be ever present for the rest of the year. Week on week, I absolutely implore you to put everything you have on whoever is playing the Atlanta Falcons.

Seriously; no matter how bad the opposition’s form is, they will right the ship, maybe temporarily, maybe permanently, against the Atlanta Falcons. Just look at the evidence: in week 4, the Titans’ air game was essentially a non-factor. Marcus Mariota put up over 200 yards and 3 passing touchdowns. In Week 5, the Texans couldn’t keep Deshaun Watson upright. They gave up 0 sacks as Watson shredded them for over 400 yards and 5 touchdowns. In Week 6, the Arizona Cardinals were 1-3-1, and one of the worst sides in the league. They jumped to a 20-10 half time lead, and scored points on all but two of their drives. One of which ended with them kneeling for the win.

The 2019 Rams are 3-3, and failing to assert themselves offensively in the same way they did last season. You watch them get back to their very, very best this weekend. 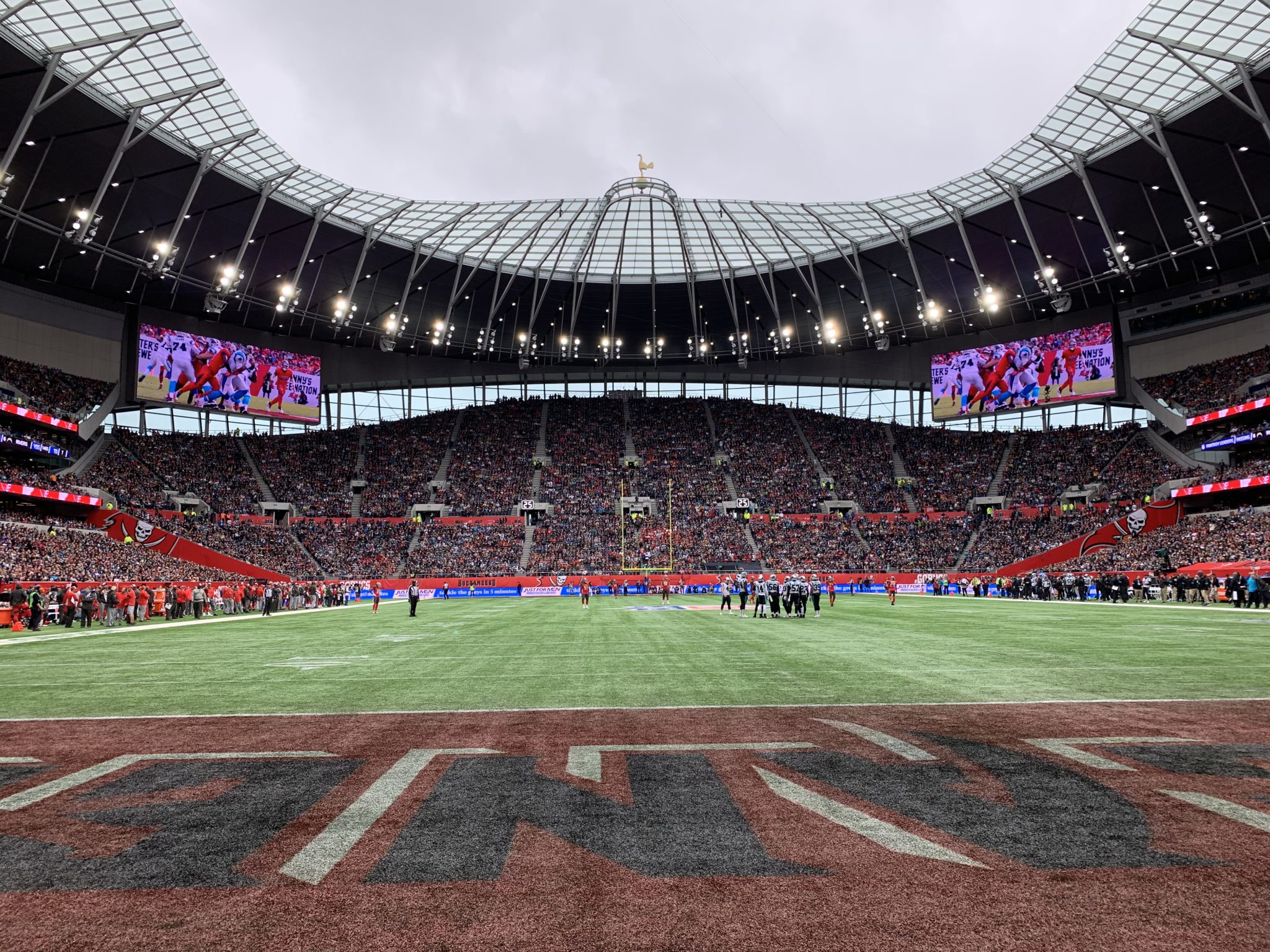 It wouldn’t be an International Series if we didn’t shine a spotlight on it, but the NFL London Games are just great, you guys. I attended this second game at the new White Hart Lane as a fan rather than among the professionals, and the experience, minus the increase in beer prices, was just superb. In all, it was a pretty thrilling game. Fans were treated to things we’ve seen each week (McCaffrey breaking the game), and things we haven’t (an elusive, fair catch, free kick attempt). The only real downside was the transport situation immediately after, and even that wasn’t dreadful.

We have a week off, luckily for me, who will be on best man duties this Sunday, before heading to the home of English American Football, Wembley Stadium, for Cincinnati Bengals @ Los Angeles Rams and Houston Texans @ Jacksonville Jaguars. The week off is good for us all. Absence makes the heart grow fonder, as they say, and that later kick off under the lights at Wembley will be all the better for it. Enjoy it while you can, folks. It’ll be a long, long wait for the next series.

Speaking of the Carolina Panthers, we might need to start talking about this side as a dark horse for a deep run. Despite missing the mercurial Cam Newton, Kyle Allen has kept the Panthers on the right track, with them 4-0 since he took over Quarterbacking duties. These Panthers are balanced on offense, thanks to the talents of D.J. Moore and Curtis Samuel outside, and the previously mentioned Christian McCaffrey on the ground. McCaffrey will have over 2000 all purpose yards this season, and, you have to say, looks every bit as good as his reputation suggests.

But it’s defensively the Panthers shine. Thanks to some pretty woeful play from Allen’s Buccaneer counterpart (we’ll get to that), the Panthers registered 5 interceptions (the first on the very first play of the game) and 7 sacks, essentially putting the game to bed before midway through the third.

Question marks will remain until Newton gets healthy, if he ever does. Right now, however, they sit at 4-2, right on the edge of playoff contention, and look a good bet to sneak in. 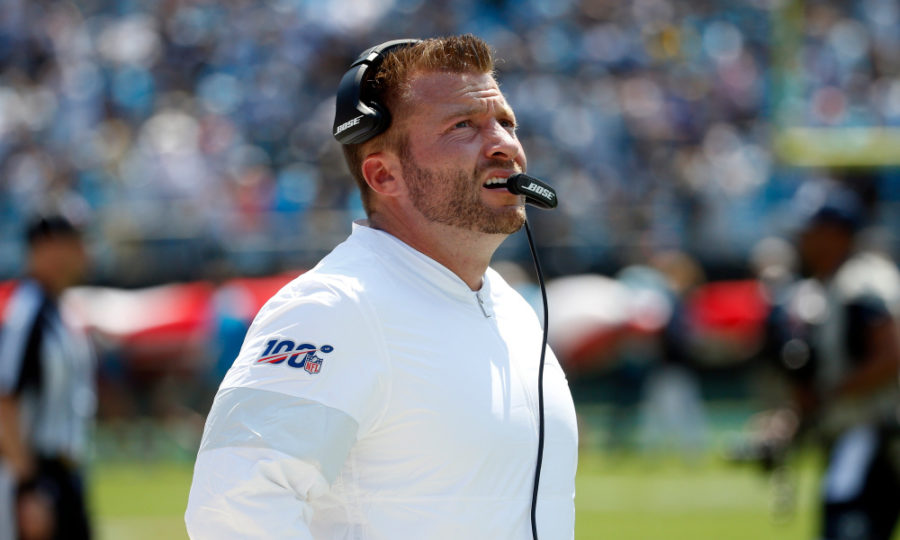 I want to state immediately that this was written before the trade of Jalen Ramsey, but I’m not sure it really changes their immediate landscape. Los Angeles Rams have fallen away. Currently at 3-3, third in a division that’s shaping up to be one of the league’s best, they need a shot in the arm, and quick.

Sunday’s performance was everything that Goff-agnostics have been arguing since he was drafted. Goff was held to less than 100 yards total, with none of his dynamic group of receivers managing over 30 receiving yards on the day. Without Gurley, the Rams couldn’t move much more than an inch on the ground. It truly was a day to forget for Sean McVay’s side.

As I said at the top of the piece, the Rams have the perfect “get back” game coming up. The Falcons will sit down and let Goff put up 400 yards and 8 touchdowns or something stupid, but it’s undeniable that cracks are beginning to show. You don’t lose three in a row if you’re a serious contender, and the Rams, as talented as they are, need to make a statement. Perhaps that statement will be back to back blow-outs, one of which is on international soil.

Last week’s “A Slight Dip” has been downgraded once again. The Dallas Cowboys are making me look like an absolute chump. Early on in the season, I tipped them as the real deal, and three losses later, they sit second in a pretty average NFC East. The first two losses were understandable, given how the Saints actually look good without Brees, and the Packers are, well, the Packers. But the Jets? After their Quarterback was out with glandular fever? Come on, Dallas. You’re better than that.

Maybe, just maybe, they aren’t better than that, though. It’s worth mentioning that Prescott was playing, for large portions of the game, with Tayvon Austin as his WR1, but that should be enough to get one over the tragically mediocre New York Jets. The worst part? The Jets score 3 second half points total. The game was basically over at half time.

Where do they Cowboys go from here? As I just said, you don’t lose 3 in a row if you’re a serious contender, but now they’re hosting their noisy neighbours, the Philadelphia Eagles, on Monday night. Again, as I just said, the Cowboys need to make a statement. This time, I’m not so sure they’ll be able to make it.

An easy one to round us out: the Quarterback Class of 2015 is over.

Cast your mind back to that fateful night. Two sides in dire need of help under centre had the option of two players who had won the Heisman Trophy in the two years previous. Jameis Winston and Marcus Mariota were the consensus top two picks in the draft. Whichever Quarterback your franchise got, you would be set. These were two “can’t fail” guys, and the respective faces of their franchises for the next 10-15 years. Fast forward 4 and a half years later, and it doesn’t look like either will make it beyond their rookie deals.

It has to be said that both players are still immensely talented. I would not be surprised if either, or both, of these players managed to piece together long careers as starters in the NFL. I would point the finger, more than anything, on poor choices organisationally as to why both have unfulfilled promise. Seriously, outside of Matt Ryan, what Quarterback could succeed under the botch-ful eyes of Dirk Koetter and Mike Mularkey?

The 2020 and 2021 draft classes are looking to have some of the most sought after Quarterback talents in decades. It’s no wonder Marcus Mariota has been benched for a broken Ryan Tanehill; they’re simply ready to move on. As for the Buccaneers, if the Quarterback Whisperer himself can’t coax consistency from Jameis Winston, it’s possible he’ll want to find someone who he can. Free agency looms for the poster boys of 2015. We wish them well.

END_OF_DOCUMENT_TOKEN_TO_BE_REPLACED
Get 20% off PFF ELITE and prepare to win in 2019!