After a blockbuster week in the NFL the playoff picture in the AFC saw a major shakeup. We saw changes in the race for the #1 seed, two divisions virtually get clinched, while the other two remained wide open. Which teams are virtually assured to make the playoffs, and how are the races shaping up for the wildcards, divisions, first-round byes, and home field advantage? Let’s take a look as we review the Week 14 AFC playoff picture and clinching scenarios.

All of the playoff numbers in this article are courtesy of @LeeSharpeNFL.

Week 13 was a rough one for the Patriots. After starting the game strongly they essentially imploded for the best part of three quarters, before rallying late. Amazingly, if Brandon Bolden comes down with the onside kick the Patriots may even have won that game. That is a testament to the effort of the team. However, they did not and it hurt them big time in the playoff picture.

By losing they actually missed a chance to clinch a playoff spot, but that is semi-irrelevant as their chances of making the playoff remains >99%. Even their chance at the division did not drop much with the Bills still having to play the Ravens in Week 14. However, if the Bills win that game then the Patriots might suddenly be in a dogfight for the division, especially if they lose this week. Equally, their chances of getting a bye week remain at a whopping 88%, and are largely tied to their divisional chances. However, a loss to the Chiefs this week would make things very interesting down the stretch.

Where this loss really stung was the home field advantage stakes. The Patriots dropped from a 75% chance of securing the #1 seed down to 38% chance. However, win their remaining games and they still only need Baltimore to drop one. Saying all of that, getting home field advantage is secondary to just fixing that offense. With that defense they will like their chances of beating any team anywhere if they can get their offense rolling.

Well well well, count out the Buffalo Bills at your peril. Their win on Thankgiving last week was a massive statement as they finally beat a team with a winning record. That win virtually assured them of a playoff spot, moving them to a 96% likelihood of making the final showdown.

Now they need to close out the season strong and they have every incentive to. Yes, the odds of being anything more than a wildcard team are against them, but there is a scenario. Right now, they have a 4% chance of winning their division, and just a 3% chance of securing a bye. However, win this week against the Ravens and both of those chances could increase exponentially, especially if the Patriots lose. In fact, beating the Ravens would also increase their 2% chance of securing home field advantage in a big way. They would still need to win out, including beating the Patriots in Foxborough, but right now that looks very possible.

Anyone looking for another statement win from the Ravens got it on Sunday. Despite being shut out in the second half they remained composed to get Justin Tucker into position to win the game for them. That win turned out to be crucial as it puts them over 90% likelihood of getting a bye, and close to a 60% likelihood of having home field advantage. A win this week can clinch them a playoff spot, and if that is coupled with a Pittsburgh loss then they can also secure the AFC North title. However, they will need to be at their best going into Buffalo. Lose in this one and they throw the AFC wide-open, for both the Bills and the Patriots.

Wins do not come much sweeter than that for a team. Beat the team that dominated you two weeks before in prime time, and somewhat put to bed an ugly moment with your play on the field. However, the bigger picture is that they now have a 43% chance of securing a playoff spot.

They will have stiff competition from a few other teams, but right now their future is largely in their hands. However, they will need to give themselves a cushion, because they may have to face a Ravens team still competing for home field advantage come Week 17.

That loss hurt. Not only did they lose the feud with the Steelers, but they also saw their playoff chances dip below 10%. A win this week is vital, but even then it likely only takes their chances of getting the #6 seed up to around 10%. A loss this week would be embarrassing and season killing.

A season that looked a disaster is suddenly rounding into shape. The AFC West is all but secure and a win combined with an Oakland loss would secure them a playoff spot. However, the vision for the Chiefs should be even bigger than that. Defeat the Patriots this week and they have a shot at getting a bye. Right now their chances lay at just 11%, but a win could see that shoot up to around the 25% mark. They would still need some help down the stretch, but piling on the Patriots problems would be a good psychological blow for the playoffs.

The last two weeks have not been kind to the Raiders. They have gone from 6-4 and a close to 50% shot of making the playoffs to 6-6 and a less than 20% chance of making it into the playoffs.

The two losses have also been embarrassing blowout, which is another concern. However, the cold weather was likely a major factor and now they get to go home to face the Tennessee Titans. A win this week could put them right back at around the 30% mark when it comes to their playoff chances. However, with their division chances sitting at around 1%, the wildcard round is as good as it is likely to get.

Sunday Night Football saw the Texans get a huge win in the playoff race. They all-but assured their place in the playoffs (92% chance), and kept their slim chances of getting a first-round bye alive (4% chance). Their season is essentially going to come down to what happens in their two games against the Titans in Weeks 15 & 17. However, they must not overlook the Denver Broncos this week or they could find that playoff chance starting to slip.

Another week, another huge statement from the Titans. This time it was their special teams which carried them, but all that matters is they got the win. After looking dead and buried after being shut out by the Broncos, they are right back in the race. The Texans still have an 80% chance of winning the division according to the numbers, but the Titans are more than capable of beating the Texans twice if they are on their game. However, with five losses already, anything more than the division is realistically out of the question (<1%).

There is no way of sugar coating this. That was a devastating loss for the Colts, who now have next to no chance of winning their division (3%). Realistically they would need the Titans and Texans to split their series and lose at least another game, while the Colts win all of their last four. They do still have an outside shot at a wildcard spot (10%), but would need a lot of help with two teams ahead of them at 7-5 right now.

Here are the AFC clinching scenarios for Week 14 of the NFL courtesy of NFL communications. 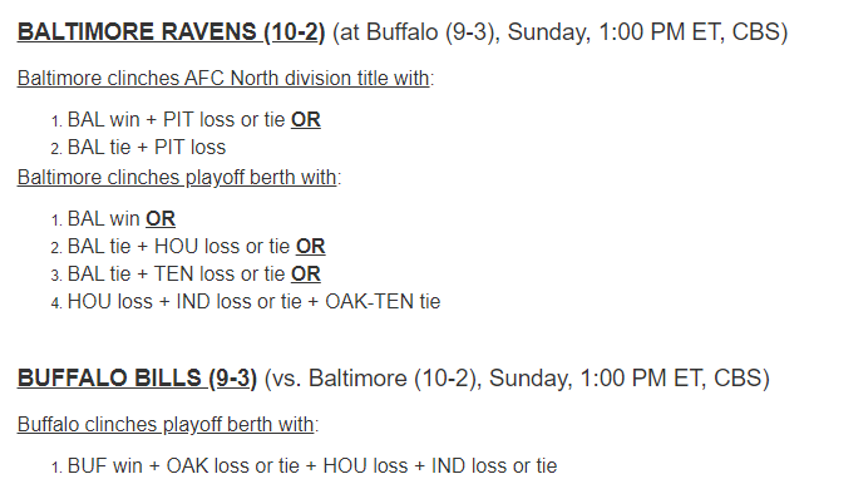 BEN IS THE HEAD OF NFL CONTENT FOR THE TOUCHDOWN. YOU CAN ALSO FIND HIS WORK AT; Oddschecker, PRO FOOTBALL NETWORK & ROTOBALLER. FOLLOW BEN @BENROLFE15 ON TWITTER.

END_OF_DOCUMENT_TOKEN_TO_BE_REPLACED
Get 20% off PFF ELITE and prepare to win in 2019!