What a fantastic weekend of football. I was lucky enough to spend a football filled weekend in London, taking in the matchup between the Bengals and the Rams at Wembley. I was also lucky enough to share some beers with Matt Miller and Connor Rodgers of the Stick to Football Podcast. They are absolutely brilliant people you should check out their podcast if you aren’t already subscribed.

The San Francisco 49ers pulled off a statement win on Sunday at home against the Carolina Panthers. Their first round rookie Nick Bosa was the star of the show as the Niners defense continued its breakout season. Bosa had three sacks and an athletic interception at the line of scrimmage in a kind of performance that will haunt the dreams of Panthers quarterback Kyle Allen. The rookie is a bona fide star in the league after only seven games. Right now, Bosa is the runaway favourite to win the defensive rookie of the year award, however if this form continues he could also win the coveted defensive player of the year trophy as well.

Did you know? Nick (3.0 Sacks) and his brother Joey (2.0) sacks posted the highest total of sacks by any pair of brothers in NFL history this weekend...

The Green Bay Packers are rolling, they are 7-1 and the offense under new head coach Matt La Fleur has started to look very potent in the last few weeks. Reason number one for this is hall of fame quarterback Aaron Rodgers. However it is another Aaron, running back Aaron Jones, who deserves the plaudits on Sunday.

The former UTEP man had 225 yards from scrimmage including a monster 159 yards receiving. Jones also added two receiving touchdowns in a game within which he was the Packers primary offensive weapon. ‘Showtyme’ has picked up the slack left in Davante Adams absence. His performances this last month have put him squarely in the All-Pro conversation. When Adams come back, Aaron Rodgers will have two premier weapons on his offense, the rest of the NFL should watch out.

As mentioned above, I was at Wembley as Cooper Kupp ran wild against the Cincinnati Bengals. The Bengals barely put up a fight as the Rams squashed them despite some sloppy play. Kupp was open all afternoon over the middle of the field, giving Jared Goff easy completions. Kupp was often so open that he had a ten yards after the catch before a Bengal defender laid a hand on him. The London crowd were witness to a special display of route running and some fabulous play calling from head coach Sean McVay.

With two bounce back wins over bad teams, the Rams will hope to kickstart their playoff push in an incredibly tight NFC. The Rams, Niners, Packers, Seahawks and Vikings look likely to share four of the six playoff spots in that conference. So any wins are of a premium. 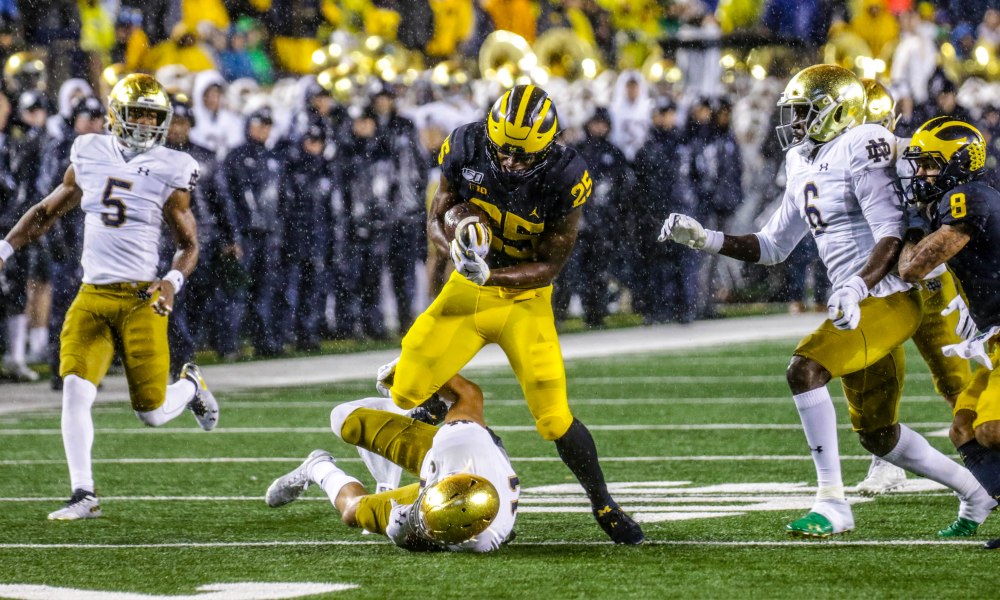 There has been much negativity surrounding Jim Harbaugh and the Michigan Wolverines this season. Poor performances in victory and resounding defeats at rival programs in the Big 10 has led to some people calling for the former Stanford coach to be sacked. However on Saturday night his players showed they had his back as they destroyed playoff pretender Notre Dame. It was Michigan’s rushing attack that did the damage going for over 300 yards at an average of 5.3 yards per play.

Freshman Hassan Haskins went for a buck fifty as the Wolverines offensive line dominated a Notre Dame front that was garnering some attention after the Fighting Irish had strung together some wins. Michigan kept the ball out of the hands of its quarterback Shea Patterson and thus limited the turnovers that have killed their offense this season. Harbaugh may have stumbled upon a formula that will give his team a chance in the big games to come. They will need any help they can get because long time rivals Ohio State are currently stomping anyone in their way.

Both pre-season favourites for the Big 12 title game Oklahoma and Texas lost in conference play on Saturday as the Big 12 probably played its way out of the playoff. In a weekend more befitting the Pac-12 than its Power 5 counterpart fans were left open mouthed as Kansas State shot out to a lead against Oklahoma and never looked back. However the Texas fans joy (this Texas fan included) at their rivals defeat was short lived as an injury ravaged Texas were toppled by TCU.

The quality of the Big 12 is getting better very quickly. Matt Rhule’s Baylor program now sit pretty atop the conference with an unblemished record. It is a real possibility that the Bears spoil the party and give themselves a shot at a conference championship this season. The biggest loser this weekend was Oklahoma quarterback Jalen Hurts. His inability to engineer a fourth quarter comeback when his team needed it will hit his Heisman trophy chances hard.

LSU continued their strong season with a big win over Auburn to climb to the number one ranking in the latest AP Poll. LSU’s big three on offense all showed out with big days to drive the Tigers to victory. On the Auburn side, future first round pick Derrick Brown had a sack but was kept relatively quiet by the LSU offensive line. There was a slight concern that LSU would be looking ahead to next weekends crunch showdown with Alabama, but the Tigers roll on.

Also in the SEC on Saturday, Tennessee continued their turnaround story with an impressive win over South Carolina. The Gamecocks continue to be inconsistent this season, capable of brilliant performances in big games but also just as likely to post a dud like on Saturday. The win for the Volunteers is massive for a fanbase that has suffered in recent seasons.

Going into this Saturdays game, Wisconsin had allowed under 700 yards on the ground. That was until they faced JK Dobbins. Dobbins had 163 yards and two scores as Ohio State stomped their conference rivals. A complete back, who can get tough yards up the gut and make plays in the passing game. Dobbins has bounced back from a sophomore slump in last seasons offense, but that shouldn’t hurt his draft stock. This class is crowded with good backs, however, Dobbins is right in the conversation of the best running backs. Worthy of a high Day 2 pick, Dobbins will be seeing an NFL field next September.

ONE OF THE ‘COLLEGE CHAPS’. A TEXAS LONGHORNS AND GREEN BAY PACKERS FAN. A HUGE NFL DRAFT ENTHUSIAST, ALEX HAS BEEN FOLLOWING FOOTBALL FOR OVER 10 YEARS, SCOUTING FOR THREE AND WRITING FOR TWO. You can follow him on twitter @byalexchinery

END_OF_DOCUMENT_TOKEN_TO_BE_REPLACED
Get 20% off PFF ELITE and prepare to win in 2019!