What a weekend, as many of the top college teams in the nation returned from bye weeks two stellar contests dominated the narrative. In the NFL upsets were the order of the day, as the three 1-7 teams all won. In addition to the upsets one team in the AFC continued to punch their card as a Super Bowl contender, thanks to the play of their quarterback Lamar Jackson. 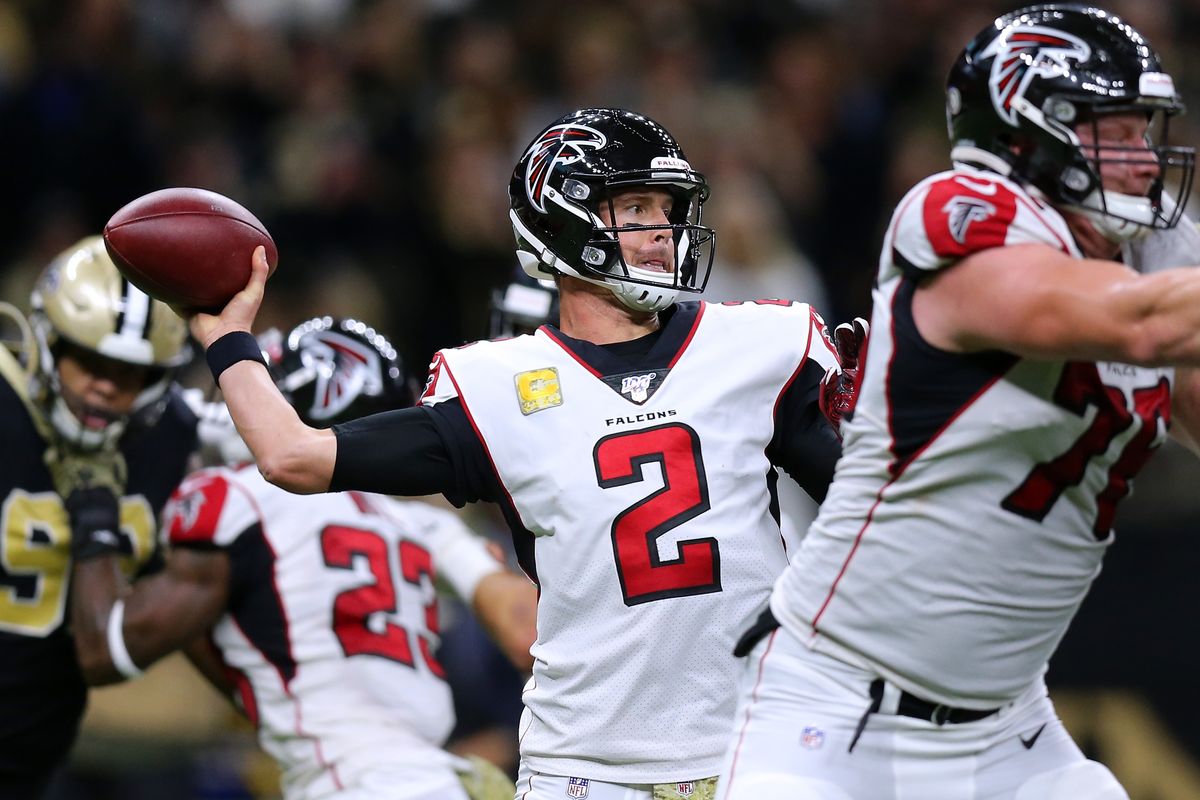 The Atlanta Falcons defense has been one of the most disappointing position groups in the league this year. Behind a monster two and a half sack day from Grady Jarrett, the Falcons kept the powerful Saints offense out of the end zone and led their team to a much needed victory.

For the Saints, it was the kind of performance that every good team has once or twice in a season. An off day in which they were outplayed across all position groups. If the Saints are to have a fairytale end to their season, they need to forget this performance. To make sure this game is but a one off bad performance. With three more division games in a row coming up, the Saints must bounce back quickly to avoid disaster.

Minkah Fitzpatrick has played seven games as a Pittsburgh Steeler. In those seven games he has totalled five interceptions and a forced fumble. Playing as a hybrid safety in the middle of the field Fitz has been set free, allowed to make plays amongst the fiery havoc caused by an elite front seven. Antonio Cromatie in 2007 was the last player to have oven ten interceptions in a season. No-one has had eleven since 1981. If Fitzpatrick continues on this pace he could be the first player since Everson Walls to have more than ten interceptions in a season.

The Steelers traded a high value draft pick to add the playmaking talent that was needed to take this team to the next level. If this monster front seven can still cause havoc, Minkah will continue to profit and the Steelers front office will continue to look like they’ve pulled off a masterstroke.

Ravens quarterback Lamar Jackson continues to be the most entertaining player in the National Football League. He has an unrivalled ability to create big plays with his dual threat ability. This of course wouldn’t be afforded to him in just any offense, but the killer combination of a front office that has brought in players perfect for a system hand crafted fro Jackson’s abilities has produced this result. Lamar Jackson is a cheat code. Something that has previously only been present as a created player in Madden. Lamar Jackson is a cheat code for the modern NFL. Just feel lucky we get to watch it every week.

.@Lj_era8 pressed all the buttons on this run 🎮
([email protected] NFL)pic.twitter.com/CsPVww96UA 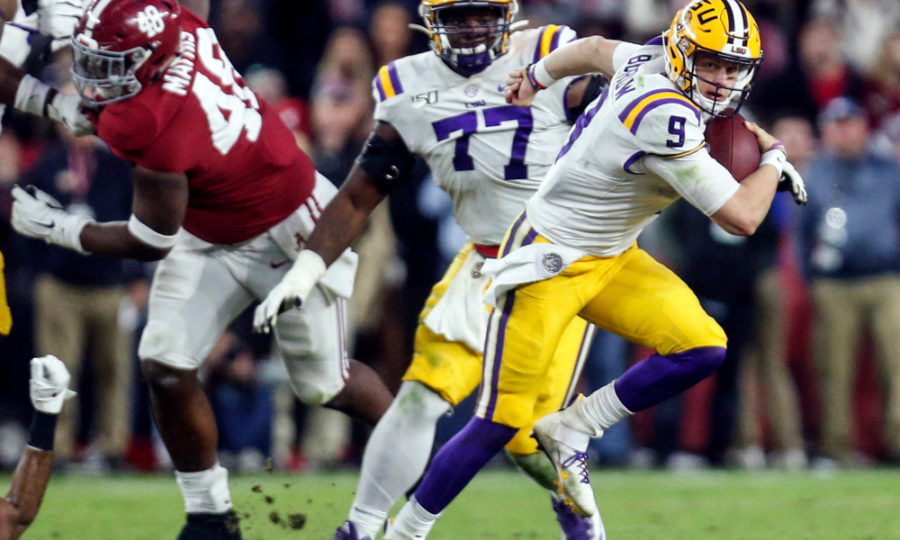 Alabama had won the last 31 games at the Bryant-Denny stadium in Tuscaloosa. That was until last Saturday. Until the Joe Burrow led LSU Tigers came to town. The #2 team in the nation defeated their SEC West counterparts and #3 ranked team to strike a hammer blow to the Tide’s National Championship hopes and boost their own claim to be ranked #1 in the committees next rankings on Tuesday.

In spite of passing for fewer yards and touchdowns, LSU quarterback Joe Burrow outplayed his teammate and favourite to be the number one overall pick Tua Tagovailoa. The performance was efficient and composed, as LSU went down the field on the Alabama defense. Alongside Burrow, it was a big day for Clyde Edwards-Helaire who had four total touchdowns the most of any opposing player in the Nick Saban era at Alabama. Clyde grew up in Baton Rouge Louisiana, a Tiger from birth. Dreams do come true.

5. These Gophers are Golden

PJ Fleck has the Minnesota Golden Gophers rolling. 9-0 for the first time in over 100 years after beating #4 Penn State 31-26 on an end zone interception. The Gophers sophomore Quarterback Tanner Morgan threw for 300+ yards and three interceptions. His number one target Rashod Bateman had over 200 yards receiving and a 66 yard touchdown as the underdog Minnesota team scored all over the Penn State defense in the first half.

The defense for Minnesota was just as impressive. They picked off Penn State quarterback Sean Clifford three times and sacked him twice in key moments.

The Gophers proved they can hang with the best teams in the Big 10, they have their destiny in their own hands. Wins in their next two conference games against Iowa and Northwestern would secure a championship game berth prior to the match against Wisconsin in the final week of the season. If Minnesota can win out and retain Paul Bunyan’s Axe, they have the ability to give the winner of the East an almighty scare in the Big 10 championship game.

6. Battle for the Bowl

Five group of five schools; Cincinnati, Memphis, Boise State, SMU and Navy are ranked 17-21 in the latest AP Poll. These are the five best teams from the ‘Group of Five’ conferences. Between them, they are fighting for the singular New Years Six bowl spot reserved for the best ‘Group of Five’ school. Cincinnati, Memphis, SMU and Navy all play in the AAC, one of these teams will most likely win the conference title and with it the spot in the New Years Six.

The one team who can throw a spanner in the works are Boise State. The Broncos are in poll position to make the Mountain West Championship game. Should they win that conference, they will be in with a strong chance of taking a NY6 berth.

There is a lot still to play for outside of the major conferences, with teams that play a fun brand of football competing for major honours. My tip is still the Cincinnati Bearcats. Outside of an early season loss to Ohio State, the Bearcats have been the best team in the group of five. Their matchup with Memphis could be special. 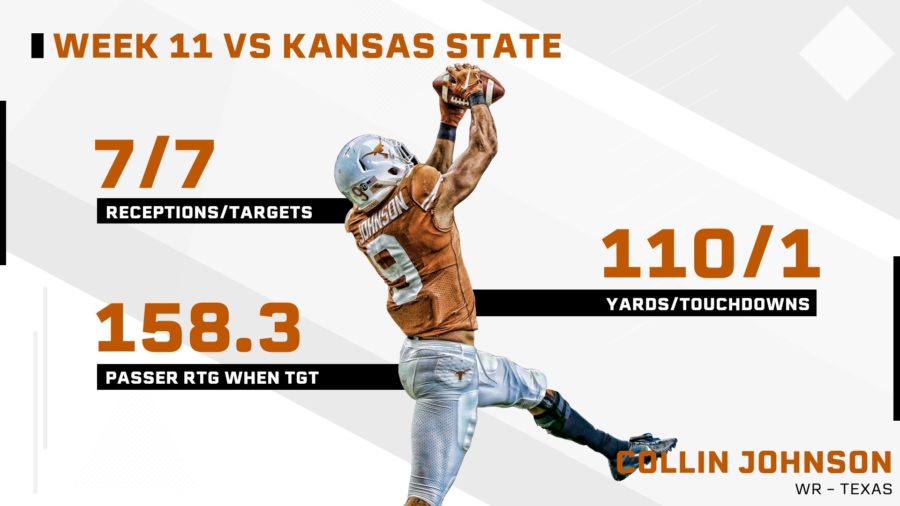 Texas wideout Collin Johnson is a huge target with a big catch radius. Unlikely to time with the best of this class at the combine and as such unlikely to be a first round pick. Johnson could be a major contributor in the right system. Solid route running and a special ability to use strength and positioning to win the catch battle. Johnson will need to get lucky with his landing spot, but if used correctly he could be a huge asset to an NFL squad, as he showed with a perfect performance for the Longhorns on Saturday…

ONE OF THE ‘COLLEGE CHAPS’. A TEXAS LONGHORNS AND GREEN BAY PACKERS FAN. A HUGE NFL DRAFT ENTHUSIAST, ALEX HAS BEEN FOLLOWING FOOTBALL FOR OVER 10 YEARS, SCOUTING FOR THREE AND WRITING FOR TWO. You can follow him on twitter @byalexchinery

END_OF_DOCUMENT_TOKEN_TO_BE_REPLACED
Get 20% off PFF ELITE and prepare to win in 2019!