The Seattle Seahawks continued their impressive record since Pete Carroll’s arrival in 2010, with their eighth playoff appearance in 10 seasons. Their 11-5 season and playoff performance was a testament to the coaching ability of Carroll and the rest of his staff, in addition to some savvy recruitment, with the Seahawks undoubtedly perceived as facing a transition season, particularly on the defensive side of the ball.

An illustration of their defensive questions may have been their commitment to base defense, imposed by their lack of a reliable nickel cornerback. In a league were nickel defense is the new base, the Seahawks had 3 linebackers on the field on 68.7% of its snaps, 30 percentage points higher than any other team. That they managed to utilise this package functionally at such a high frequency is an immense credit to the coaching staff & the players’ execution.

Additionally, the holes left by the departures of Frank Clark and Earl Thomas were in some way plugged by the arrivals by trade of Jadeveon Clowney and Quandre Diggs. Diggs immediately offered a versatile, veteran presence on the back end and was particularly impressive in coverage. He & Bradley McDougald were a different kind of safety pairing than the Kam Chancellor-Earl Thomas combination but they were nonetheless an effective duo.

Clowney meanwhile was the prime threat on the Seahawks’ defensive line. Although his sack numbers did not reflect his dominance, his disruptiveness enabled the Seahawks to offer a degree of danger from their defensive line. Clowney played a major role in their road victory over the 49ers. However, neither Clowney or Diggs could prevent the Seahawks from becoming the 18th best defense in the NFL per both DVOA and PFF grades.

The Seahawks deserve immense credit for their offensive performance. Their commitment to the run game continues to be bemoaned widely yet may have helped mask some of the defense’s issues. The team was 10th in the NFL in time of possession overall. The Seahawks also managed to build an offense around the unique skillset of Russell Wilson, particularly utilising his phenomenal abilities to throw deep and operate out of structure. Tyler Lockett passed 1000 yards for the first time in his career and D.K. Metcalf was also used superbly. The Seahawks offense ultimately was the fifth best offense in the NFL in DVOA, as its offense become its engine.

The Seahawks had an impressive offseason as they bolstered their roster with a number of talented players who appear to be comfortable scheme fits. The headline addition is 2019 First-team All-Pro safety Jamal Adams. The former LSU Tiger and New York Jet brings a fiercely charismatic on and off-field presence to the Pacific Northwest and instantly upgrades the Seahawks in every defensive facet. Adams is a phenomenal run defender and pass rusher and offers serious coverage versatility and quality. Though not an elite centre-fielder, he is highly capable overall as a deep cover man and phenomenal in underneath zones and in man coverage.

Quinton Dunbar, pending a possible suspension, is another intriguing acquisition. The former Washington cornerback has transitioned impressively from wide receiver since arriving in the NFL and pairs eye-catching length and athleticism with the rapid processing required in the Seahawks’ scheme and the ball skills expected of a former wide receiver.

Greg Olsen and Bruce Irvin will also offer veteran experience at tight-end and EDGE respectively whilst the team added the highly impressive Jordyn Brooks from Texas Tech through the draft. Darrell Taylor is also well regarded after recording the 26th best pass rush win-rate and the 22nd best pass rush grade out of 268 qualifying EDGE players in CFB last season (whilst playing in the SEC) per PFF. 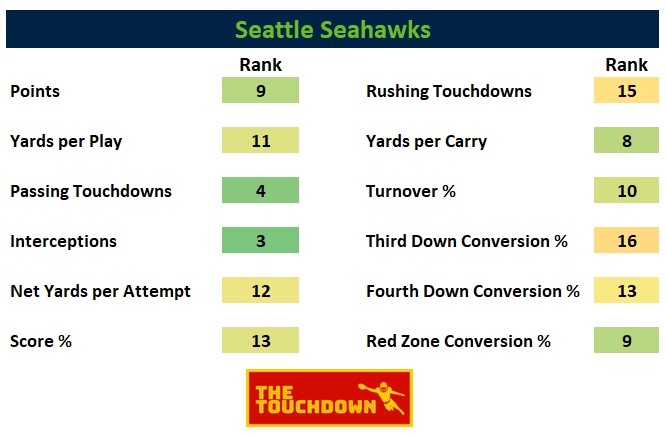 The Seahawks offense will go where the brilliant Russell Wilson takes them. Wilson has continuously improved since arriving in the NFL and now finds himself widely considered as a top-two quarterback in the league along with the Chiefs’ Patrick Mahomes. Wilson possesses superb accuracy to all levels of the field but throwing deep is where he particularly separates himself, along with his escapability & overall abilities out of structure.

He is well complemented by the one-two punch at receiver, Tyler Lockett and D.K. Metcalf. Lockett stepped up after Doug Baldwin’s departure to lead the Seahawks receiving corps and remains a superlative deep threat. Metcalf seems to only be scratching the surface of his potential but was used incredibly wisely as a rookie as the Seahawks ensured he could stay within his comfort zone. In Schottenheimer’s bombs away passing offense, both Lockett and Metcalf are primed for further growth and success with Wilson passing them the ball. After being the fourth best passing offense in the NFL last season in DVOA, could the Seahawks improve further in 2020 if they can trust their defense and be willing to throw more.

In the run game, the Seahawks have some talent at running back, with Chris Carson and Carlos Hyde two capable, hard-to-tackle veterans. 2018 first round pick Rashaad Penny may recover from his ACL injury at the back end of the season. However, given so much of his impact came on breakaway runs he may not be especially impactful in 2020.

In front of the backs, the Seahawks’ perennially poor offensive line never seems to hinder them too much. Part of that may be the Wilson-factor, making things harder in both the passing and rushing games for defenses. Duane Brown is a capable left tackle but other spots look problematic for now. More magic may be required. 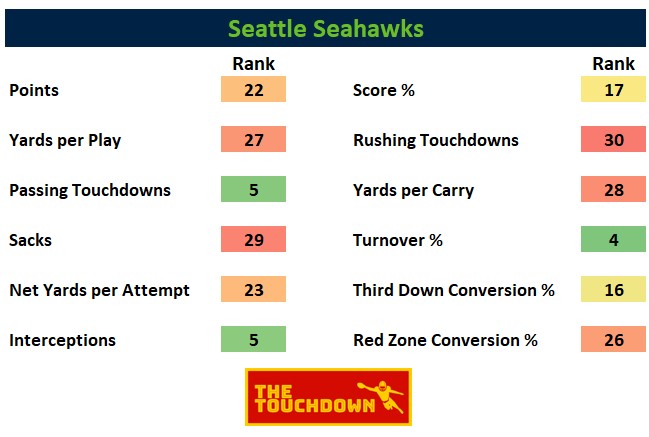 The Seahawks may yet recover their defensive mojo. Jamal Adams and Quinton Dunbar are outstanding additions and join Shaquill Griffin and Quandre Diggs to form a highly capable starting unit in the secondary. Second year safety Marquise Blair is reportedly transitioning to nickel cornerback and indications are that he is performing well. The Seahawks could have an extremely amoebic secondary and a lot of quality.

The team is also stacked at linebacker. Bobby Wagner struggled for the first time in his career but perhaps this was a product of the staggering demands placed upon his shoulders. Both he and K.J. Wright are still impressive players, capable of closing windows rapidly over the middle of the field or eliminating them entirely, as well as being forces against the run.

The Seahawks could go different ways with the third linebacker spot. Bruce Irvin could return their SAM position to the defensive line style player that existed early in the last decade. Alternatively, Wright could kick over to SAM in base, allowing rookie Jordyn Brooks to play as the WILL linebacker. Other options include 2019 draft picks Cody Barton and Ben Burr-Kiven.

The defensive line is the main question. The Seahawks have been linked all offseason with the signing of a big name EDGE, with Yannick Ngakoue, Everson Griffen and Jadeveon Clowney all linked. None have been acquired at the time of writing. Nevertheless, its arguable that whilst the Seahawks don’t have the same high level of talent they had in Clowney last season, they may have a greater breadth of styles along the defensive line this season. Jarran Reed could still prove to be a force on the inside, and Poona Ford is phenomenal against the run. Irvin will offer some EDGE quality as well. The team will hope that L.J. Collier proves a viable inside-outside option, Rasheem Green improves and Darrell Taylor carries his EDGE rushing quality into the NFL.

The 2020 Seahawks look a better team than the 2019 version, though their record may not reflect it by the end of the season. In 2019, the team had a points differential of just 7 points, 14th in the NFL, which suggests they perhaps enjoyed some lucky victories.

Even so, with Russell Wilson and the deep threats at wide receiver, the Seahawks’ offense could build on their impressive 2019 efforts. If the defense improves on the back of the Adams and Dunbar acquisitions, the offense could even be trusted to throw the ball more. The 49ers may still be a better side, but the Seahawks have the better quarterback. Expect them to challenge for the 49ers’ NFC West crown and be a threat in the playoffs.

END_OF_DOCUMENT_TOKEN_TO_BE_REPLACED
Get 20% off PFF ELITE and prepare to win in 2019!