Let’s get the elephant in the room out the way: I’m sad the London Games are over for another year. Yes, it’s an expensive day out. Yes, the queues at half time are ridiculous and the quality of the food and drink on offer leaves plenty to be desired. YES, the on field product has been lacking the past two weeks. Does that mean I won’t be there every week next year? Absolutely not. Bring it on, I say. And show me Falcons/Saints at Spurs, please.

Let’s start with the MVP race. You’re off your rocker if you haven’t got Russell Wilson top of the tree right now. The guy has been playing at an unbelievably high level for the vast majority of his career, but the 7 year pro is at the peak of his powers right now.

In an offense that is stifled by the guy calling the plays, Wilson finds himself with 22 touchdowns and 1 interception, and is on pace for the most, and least, of his career. On Sunday, he dropped 378 yards and 5 touchdowns on an, admittedly, pretty poor Buccaneers team. But they got the win, and sit 7-2. In most divisions, that’d be enough to cement them as the number one side, but this is the NFC West.

The Seahawks will be in the playoffs in 2019, and I expect them to go far. And they’ll ride the arm (and legs) of Dangeruss as they do.

I picked up on the Oakland Raiders in Week 5, but it’s really amazing just how “under the radar” they seem to be flying. The Raiders hosted their first proper home game in 6 weeks, against a Detroit Lions that aren’t bad, per se, and pulled out an impressive 31-24 win. The Raiders are at 4-4, and are a very sneaky bet for a playoff charge.

It’s the manner in which they won that’s most surprising. Derek Carr isn’t a bad player, but he hasn’t looked as comfortable as he did on Sunday in a WHILE. 289 yards and 2 touchdowns is a nice day at the office. It’s the rookie on the ground that deserves the plaudits, really. Josh Jacobs has grown into a really important part of this offense, and his 120 yards (and 2 touchdowns) set the tone for how the Raiders were to go about things.

They might not make the playoffs this year. But that’s ok. They’re a young team, building towards a stretch of real promise in their early Las Vegas years. They’re passing one test right now, though: they’re actually quite fun to watch.

This week was really difficult to put together, mainly because I could have interchanged the subjects of the 3 positive sections and it would make sense. I’ve written myself into a corner. But, the Baltimore Ravens are legitimate. And that’s really underselling it, considering they just beat the previously undefeatable New England Patriots.

In reality, it wasn’t even close. Lamar Jackson, an MVP candidate in his own right, just seemed to do whatever he wanted. 17/23 for 163 yards through the air isn’t something to get carried away by. Add an extra 61 on the ground, with 2 touchdowns to boot, and you’ve got the prototypical dual threat performance.

The Ravens are on their way. And they’ll have taken the experience of last seasons playoff defeat, and win one in the post-season. That’s my November playoff prediction. Many expected the AFC to be a toss up between the Chiefs and the Patriots. Harbaugh’s men will do their absolute most to make it less of a forgone conclusion come January.

I’m turning this thing on its head. If you’re a fan of the Miami Dolphins, it’s time to repeatedly smash your palm against the panic button. In an act of defiance by the worst team in the league, Brian Flores and his boys played host the the equally inept New York Jets, and won a game. THEY WON A GAME.

I’m, frankly, as shocked as you are. But this isn’t a positive section of this piece. Oh no. The Dolphins set up their stall to be the absolute worst team in the NFL. They wanted to win the first overall pick, and, likely, to select the darling of the 2020 draft class: Tua Tagovailoa. By beating the New York Jets, they’ve seen themselves tumble into 3rd in the current draft order, behind winless Bengals and Washington.

Where do they go from here? Well, they do play the Bengals late in the year. That game could well be the difference between Tagovailoa and Joe Burrow. Regardless, unless the Bengals manage to find a win from somewhere, their claim on the man known as Tua has significantly weakened. Only time will tell if they can recover that first overall pick. 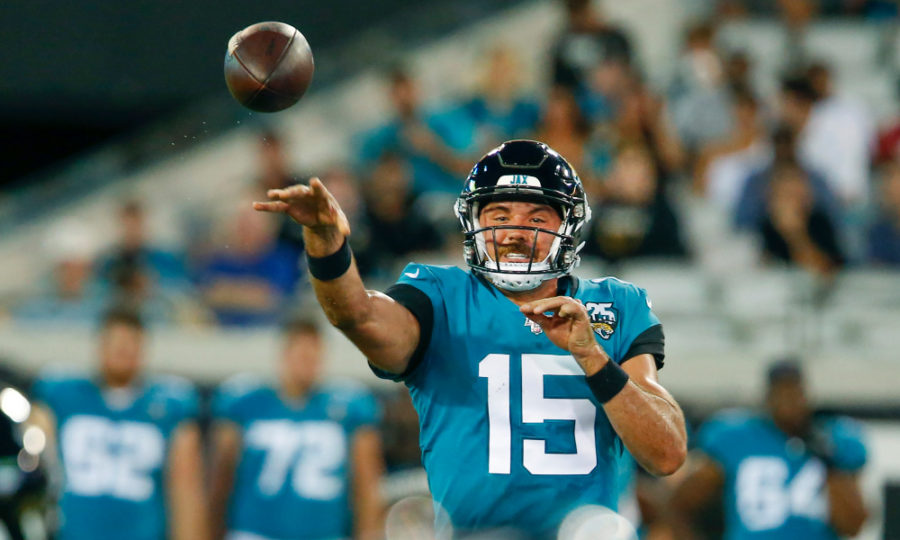 It started as a meme. Little more than a joke. Nick Foles’ early season injury threatened to derail the Jacksonville Jaguars season, so the fans looked to the little things for hope. Up stepped a 6th round rookie sporting a slick ‘stache and a headband. Gardner Minshew II. A relatively good performance against the Chiefs in relief of Foles week one build the platform for Minshew to launch from. The Texans proved tricky, but he kept them in the game enough for the coaches to lose it on a 2 point conversion attempt. A massive win on Thursday night saw Minshew Mania explode. From there, he’s been everywhere. You could barely walk the streets of London this past month without bumping into a fake moustache and headband. He was our king. Our saviour. And now he’s gone.

Perhaps we expected too much? Minshew’s performance at Wembley was pretty horrible, but we forget he is a rookie, and a late round pick at that. Being a starter in his first season should have never been on the cards. His days as a starter for the Jags, however are over. For now at least. Foles is back under centre after the bye, and Minshew Mania will die down thusly. One hopes he will rise from the ashes. Thanks for the memories, Sir Gardner. Here’s to a thousand more.

I don’t want to spend too much time on this one because I’ve spoken about them at length over the past few weeks, but the Chicago Bears suck, and it bums me out. I had pretty high hopes for Chicago. I looked at the steps McVay and the Rams took from his first season to his second, and foolishly thought Nagy and the Bears were on a similar trajectory. I was wrong.

Sunday evenings loss to the Eagles was the first nail in the coffin of their 2019 season. At one point late in the first half, they had a total of MINUS TEN total offensive yards. The Eagles huffed and puffed but couldn’t put away a spirited Bears defence. I’m not blaming their defence, by the way; the Bears defence is still obscene. It’s not their fault the other side of the ball is so putrid.

A 22-14 loss, their first round Quarterback limited to 125 yards (he completed less than half his attempted passes), and sitting at 3-5. This is turning into a lost season in Chicago. And where do they go from here? They don’t have a first round pick in 2020, so tanking is fruitless. I guess they rally as best they can, and hope that Winston or Mariota can be at least serviceable for 3 years from 2020?

END_OF_DOCUMENT_TOKEN_TO_BE_REPLACED
Get 20% off PFF ELITE and prepare to win in 2019!