In the first year since 2010 the Pittsburgh Steelers would start the season without all-star wide receiver Antonio Brown and their offense certainly missed him. A team that always seems to be littered with issues and discontent in the locker room in recent years actually had a pretty quiet off season entering 2019. Brown was still causing issues around the NFL but at least he wasn’t the Steelers issue anymore (minus the salary cap hit).

Unfortunately for Pittsburgh he did leave a big hole to fill. There was no doubt that JuJu Smith-Schuster was a great find in the draft and was capable of stepping into the role but, with a Week 2 injury to quarterback Ben Roethlisberger, the offense would stumble and not even the dynamic and always entertaining Smith-Schuster could get them going.

The Steelers resorted to their second and third-string quarterbacks during the 2019 season. Mason Rudolph and Devlin “Duck” Hodges combined for one of the worst seasons offensively in recent Steelers history. Fortunately for Pittsburgh, the early season acquisition of Minkah Fitzpatrick and the standout performances from every position on defense, especially T.J. Watt and Bud Dupree, they were able to keep the Steelers in the hunt and still fighting for a playoff spot into the final week.

Finishing with a record of 8-8, the Steelers missed the playoffs for the second year in a row. The record books will show a .500 season but given how terribly the offense played  this should be considered somewhat of a successful season and while not be as highly regarded as the Ravens 14-2 record, the 2019 season is one to be impressed rather than disappointed by. The play of the defense demonstrated that the Steelers could still compete and if they sort the offense out, they will be fighting for the playoffs and possibly a shot at the Super Bowl once again. 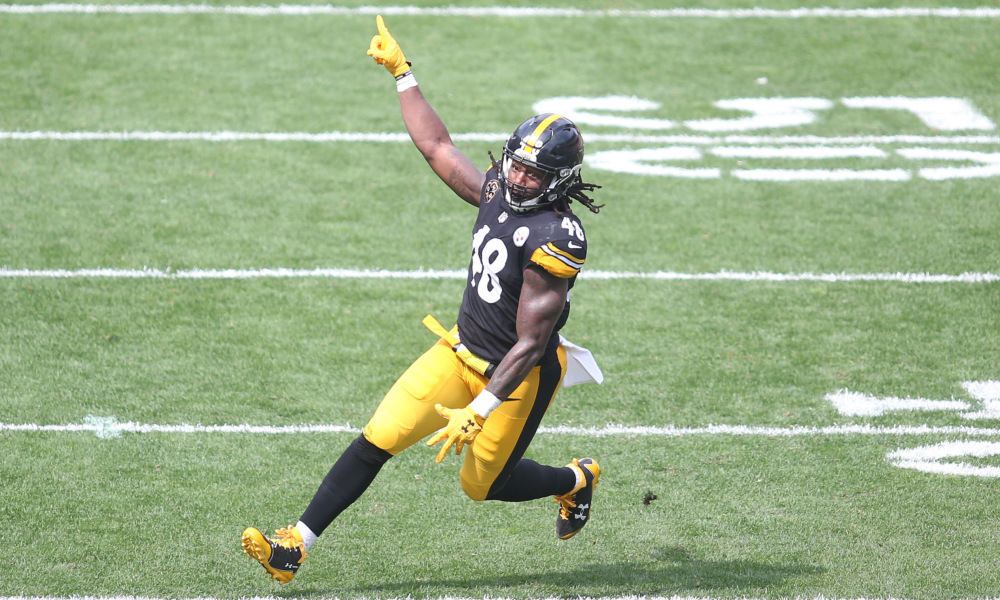 Despite going into the offseason with barely any room in their salary cap, the Steelers managed to bolster the offense whilst also keeping that star studded defense in shape. Re-signing Bud Dupree had to be the priority of the offseason and when he signed the franchise tag tender on April 23rd Keith Butler would have been licking his lips. The Steelers later exercised the fifth year option on T.J. Watt’s rookie deal, keeping the dynamic pass rush duo together for another year.

With Fitzpatrick and Haden as well as linebacker Devin Bush likely to get help from third-round draft pick Alex Highsmith, the Steelers defense look set for another big year; Blitzburgh is alive and kicking.

Offensively, the Steelers front office didn’t disappoint, bringing in former Pro Bowl tight end Eric Ebron on a two-year deal. As long as he can stay healthy, Ebron will provide a quality red-zone target for Roethlisberger and should work well in tandem with Vance McDonald. The Steelers did what they do best and picked up another young wide receiver in the second round of the draft in Chase Claypool. The 6’4, 238 pound speedster is a huge addition to the Steelers offense and should be a useful red-zone target.

Despite the additions of new players, the biggest offseason move for Pittsburgh is Ben Roethlisberger returning from injury. Despite being in the twilight of his career, the Steelers are a vastly better team on offense with Roethlisberger slinging the ball from under center. If Roethlisberger can stay healthy, and the defense continues to play great football, the Steelers have a high ceiling in 2020. 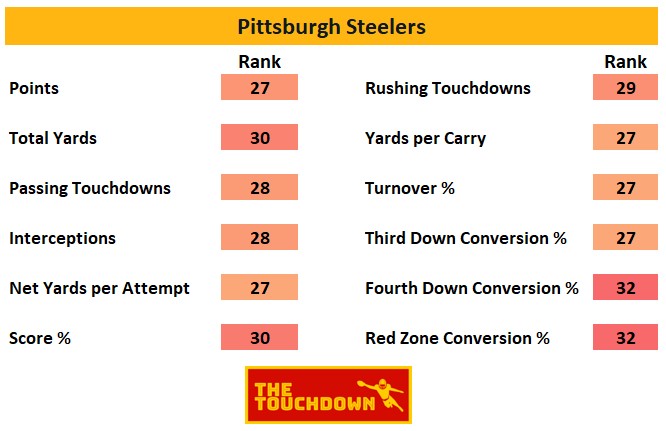 After a poor performance from pretty much everyone on the offensive side of the ball, 2020 is a chance for the Steelers to get back to normality. Injuries plagued the Steelers season with Roethlisberger, Smith-Schuster and James Conner all missing multiple games, so keeping players healthy is a priority. The Seelers lost long-time offensive lineman Ramon Foster to retirement and acquired Stefen Wisniewski. While not a perfect replacement for Foster, if he gets time to adjust he could provide much needed protection for the quarterback.

The lack of air attack last season meant that teams playing against the Steelers stacked the box and went all out trying to prevent the run. After having a big season during Le-Veon Bell’s holdout James Conner was unable to repeat and the Steelers run game noticed the difference. After 973 rushing yards and 12 touchdowns the previous year, Conner was only able to follow that with 464 yard and 4 touchdowns. As stated earlier, a lot of that can be put down to opposing teams not having to worry about the passing attack, but if the Steelers want to make it back to the show they need to get the running game going again.

The addition of Ebron is huge for the Steelers as they finally have an athletic tight end that they can build a red-zone offense around. Ebron proved what he was capable of when he was with the Indianapolis Colts in 2018. He was selected to the Pro Bowl after racking up 750 yards and 13 touchdowns. Injury plagued his 2019 season but the Steelers, and Randy Fichtner in particular, will be hoping he can get back to his touchdown scoring ways.

The Steelers scouts always seem to bring in quality wide receivers during the draft and the second round addition of Chase Claypool looks to be no different. With a wide receiver depth chart, including Smith-Schuster, James Washington, Johnson and now Claypool, the Steelers have a young group who are all more than capable of putting up big numbers. Johnson had a strong rookie year with 680 yards and 5 touchdown. With Smith-Schuster set to get the most attention again in 2020, Johnson could be set for a breakout year. 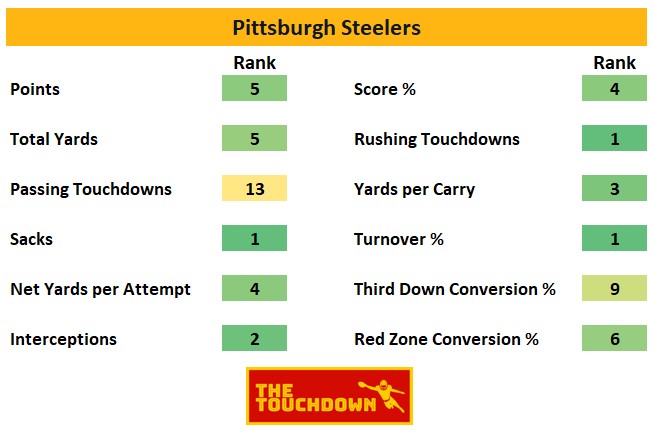 The Steelers had one of the best defenses in the league last season and they are without doubt the reason that the Steelers still had a shot at the playoffs in Week 17. Dupree staying for at least another year alongside Watt means that the Steelers should be able to exert plenty of pressure on the quarterback.

With the pressure coming off the edges as well as Cameron Heyward and Stephon Tuitt piling the pressure on up the middle, the Steelers should be able to carry on from last year and force plenty of turnovers. With Fitzpatrick, Haden, Steven Nelson and Mike Hilton making for a solid backfield, they should be able to take advantage of the pressure exerted by the guys up front.

Devin Bush is having the same sort of impact that Ryan Shazier was capable of producing and, with Vince Williams coming back from injury to go along with rookie Alex Highsmith, this defense is stacked across the board. If the Steelers can get the offencs going and not rely on the defense as much as last year, then look for this defensive unit to potentially put up even better numbers than last year.

Mike Tomlin has never had a losing season whilst at the helm of the Pittsburgh Steelers and he is in a position to continue that feat. With one of the easiest schedules on paper in 2020, the Steelers have the chance to bounce back in a big way and make a strong run at the playoffs. Strong additions on the offensive side of the ball will help a poor offensive showing from the season before. Eric Ebron, Derek Watt and Chase Claypool could all have big impacts in both the running and passing game and with Roethlisberger back in the black and gold the sky’s the limit.

2020-07-23
Previous Post: The Art Of The Salesman: College Football Recruiting With Jeff Reinebold
Next Post: 2020 Mid & Late Round Targets: Quarterback

END_OF_DOCUMENT_TOKEN_TO_BE_REPLACED
Get 20% off PFF ELITE and prepare to win in 2019!