As one season ends and another one begins, 32 NFL franchises put 2020 firmly in the rear view mirror and gear up for another tilt at the Vince Lombardi Trophy. The hard work starts here, and for many has already begun; general managers and head coaches are finalising their staff and looking ahead to turning their rosters into potential challengers.

In this series we identify the key components that go into building a winning team, and what each franchise needs to do to be in the mix come the playoffs next January. We continue our team by team offseason review with a look at the New York Giants:

If you looked at the teams win total in Vegas at the start of the season and how they finished up I guess the word that best sums up the Giants season was expected. However if you take a look deeper it is a little bit more complicated than that. The Giants had a new untested coach in Joe Judge, who at first looked a little out of his depth but seemed like someone Giants fans could have some faith in at the end. The team struggled badly to start but still had a chance to win the division in Week 17. Okay – the division was weak – but if you are a glass half full guy like me then there were some positives to the Giants season that were barely achievable at around the mid-point.

Given the struggles on offense it was slightly surprising that there were no major changes to the offensive staff. The only major change was the Giants hiring a new offensive line coach in Rob Sale who came from Louisiana Lafayette. The line was not great, and after former line coach Marc Colombo was fired mid-season following a reported coming to blows with Judge it was no surprise to see this. But I think most expected to move on from Jason Garrett, who hasn’t convinced anyone as an offensive play-caller (except Jerry Jones) since about 2008. I believe the lack of change was to try and help Daniel Jones but I am not sure how working with Garrett can be seen to do that.

State Of The Roster

As with a lot of franchises, the question on state of the roster falls on how good the QB and signal-caller is. Given the performance of Daniel Jones in his 2 years in the league and Jason Garrett’s record throughout his time calling plays, the roster has major concerns. In 2020 only the New York Jets scored less points on average, but they also ranked high in penalties stalling drives (31st) and dropped passes (29th). The offense has to improve and this is the year that if it is going to work for Jones he has to show it. Giants fans will be hoping the stability of the coaching staff and another year of experience will do the trick; you may have guessed by now that I am not so sure.

As with many teams this offseason the Giants are right up against the cap, with only around $6 million in free space if the latest rumoured numbers are confirmed. However, to gain some significant space there are 3 relatively simple moves.

The first is to cut Kevin Zeitler. Although Zeitler is still a good player the Giants drafted a guard last year (Shane Lemieux) and would save $12m with this transaction.

Continuing on the Offensive Line, cutting Nate Solder may be even more obvious than Zeitler. The Giants drafted their left tackle of the Future in Andrew Thomas last year and therefore Solder – who has the second highest cap hit on the team – is surplus to requirement. One thing that should be noted on Solder is that he opted out of the 2020 season due to the pandemic, so this decision is predicated on him suiting up in 2021.

The final move is to cut ties with Golden Tate. The Giants are desperate for playmakers as we will discuss later, but the signing of Tate has not worked out and dependent on when they cut him, the Giants could save between $6 and $8 million. 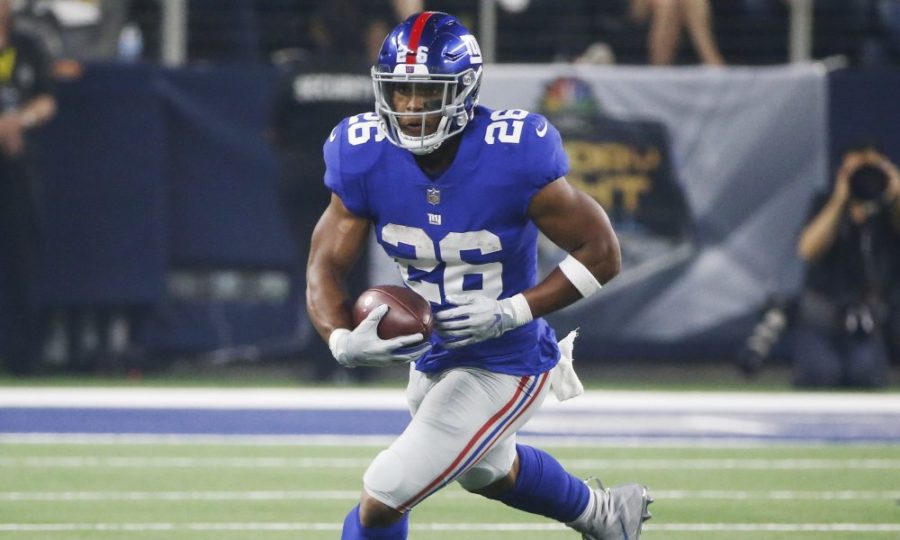 One of the major headaches that the Giants have to address with their free agents is what to do at defensive line. At present they have two linemen available for free agency; Leonard Williams and Dalvin Tomlinson, and the question for Gettleman is which one to pay. Williams played excellently on the tag last year so without a long term deal his cap hit may be prohibitive. As for Tomlinson, although his number are not as spectacular he is a team captain and leader who is an excellent run stuffer and anchor on the line.

The Giants are also losing a number of running backs from the roster, in fact only Saquon Barkley is not a free agent from the 2020 squad. I would expect Dion Lewis to be moved on as he has been disappointing since joining. But given the performance of Wayne Gallman when Barkley went down injured it makes sense to attempt to bring him back, and help lighten the load on Barkley who the Giants will not want to rush back given his injury.

I think the most obvious area of need for the Giants is at wide receiver. The team struggled to move the ball and score points and given, at present, they are all in on Daniel Jones they need to get him some explosive pass catchers to stretch the field and help score points.

Although as mentioned above I expect the Giants to look to bring back one of their defensive linemen, I do see a pure edge rusher as an area of need. The team have drafted here recently but it has never quite panned out and getting to the QB is vital for success in the league.

I would also expect the Giants to focus at corner as although James Bradberry played well, the depth alongside and behind him is underwhelming. If the team can address this it will also allow the DL more time to get to the QB and create havoc.

END_OF_DOCUMENT_TOKEN_TO_BE_REPLACED
Get 20% off PFF ELITE and prepare to win in 2019!