One of the fundamentals of being successful in dynasty leagues is to recognise when to buy low and sell high on players. Much like the wave of recent cryptocurrencies hitting the market you want to buy into the currency when it’s low and then try to sell at its absolute peak. Below I list some of my favourite buy low candidates this offseason who I feel are currently at a lower value than they should be.

Jumping straight in with a generational talent and one of the best running backs in the NFL Saquon Barkley. You won’t find many fantasy players that don’t know just how good he is but you may find a few frustrated Barkley owners who have suffered with their star running back on IR for too long. These are the ones you need to take advantage of.

In another season where the Giants stunk up the already stinky NFC East, Barkley watched from the side lines. An ACL tear in week 2 ended his season early and ended the hopes of many fantasy managers who drafted him so high. Add to that an injury affected 2019 season, fantasy frustrated owners may be now looking to cash in. This is where I dangle a tempting treat under their nose (A juicy trade offer).

What period are we in right now? Rookie Hype Season! The part of the offseason where the only thing you see on NFL media outlets outside of free agency is rookie mock drafts and college tape of the best prospects. Rookies are entering peak value and people are going overboard about them. I managed to trade for Barkley a couple of weeks ago by offering my 2021 mid first round pick and including 2020 rookie receiver Chase Claypool coming off an impressive start to his career. Ok so this was a bit of a heist and you may not be able to get him for this value but his price now is considerably lower than it was this time last season. I’ve seen another trade where Barkley went in exchange for just two first round picks; one early, one mid-round.

It’s worth noting that it’s not set in stone that Barkley is fully healthy by the time the season rolls round but the Giants will surely address their horrific offensive line this offseason. With a couple of things going his way Barkley can be a fantasy monster again in 2021 and beyond, and now is the time to take a calculated gamble on it. 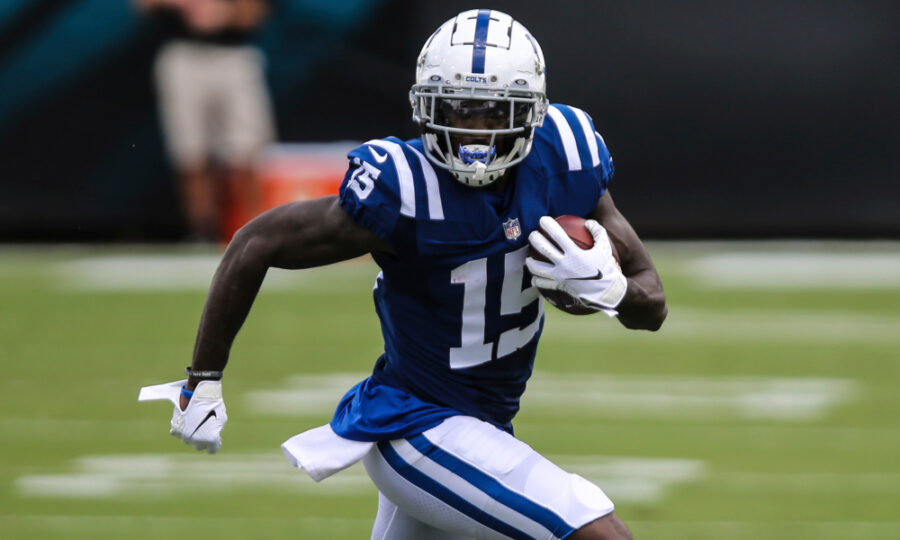 On the opposite end of the scale far away from massive trade deals we find a rather forgotten about wide receiver going into year 3 of his NFL career having only featured in 9 games. The receiver in question is Parris Campbell, who like Saquon Barkley also went down to a season-ending injury in week 2 of the 2020 season.

The Colts managed to reach the playoffs last season but are going through a number of key changes to their offense, mostly notably the quarterback position and the arrival of Carson Wentz following Philip Rivers retirement. That’s not he biggest key change that affects Campbell though, this would be the fact that long time Colt TY Hilton is now an unrestricted free agent and looks set to leave.

This elevates Campbell who was publicly backed by the GM last month as being a big part of the Colts offense going forward and I have to believe that can be true from what we’ve seen. In the only full game we saw last season in week 1 Campbell was featured heavily catching 6 of 9 passes for 71 yards. Now we are all aware the Colts could land a big free agent wide receiver such as Allen Robinson or JuJu Smith-Schuster but Parris Campbell has his own unique skill set featured around his rapid speed. The price to acquire Parris Campbell is as low as a late 2nd/early 3rd and I would certainly be paying up for this. 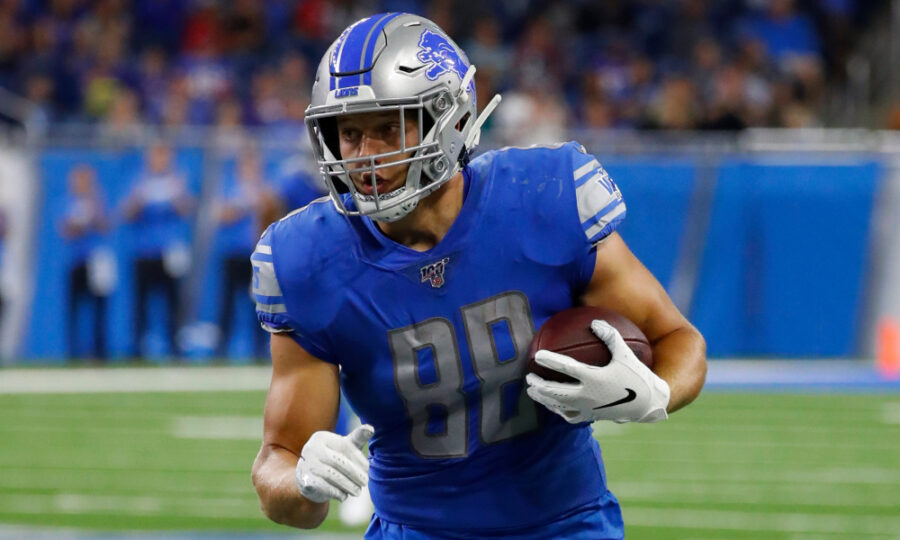 TJ Hockenson may already be a top 5/6 tight end in a lot of people’s dynasty rankings but that doesn’t stop him being a great offseason buy in my opinion. From the fantasy managers I’ve spoken to recently they are all out on Detroit Lions players with the exception of second year running back D’Andre Swift. The Lions are seemingly back to rebuilding under new head coach Dan Campbell following the blockbuster trade of letting Matthew Stafford go and receiving multiple picks plus Jared Goff. With their current cap space being in the negative there is little room for any key offensive reinforcements.

Welcome to the Swift and Hockenson show in 2021. Hockenson showed us what he can do in 2020 in a general down year for tight ends, finishing as the TE5 registering 67 catches for 723 yards and 6 touchdowns. Hockenson could be an even bigger factor in the Lions passing offense going forward and with star receivers Marvin Jones and Kenny Golladay hitting free agency. The latter being tipped for the franchise tag still doesn’t affect the fact that Hockenson is looking at a bigger workload in 2021 and I can easily envisage him finishing higher than the TE5 next season.

Hockenson is likely not going to come cheap but you can take advantage of any owners concerned that the Lions will suck once again and step in to take him away. I like to offer something in the region of a 6-10 ranked tight end such as Noah Fant or Dallas Goedert plus a second round pick to try to acquire Hockenson who can still improve and is still so young (23). 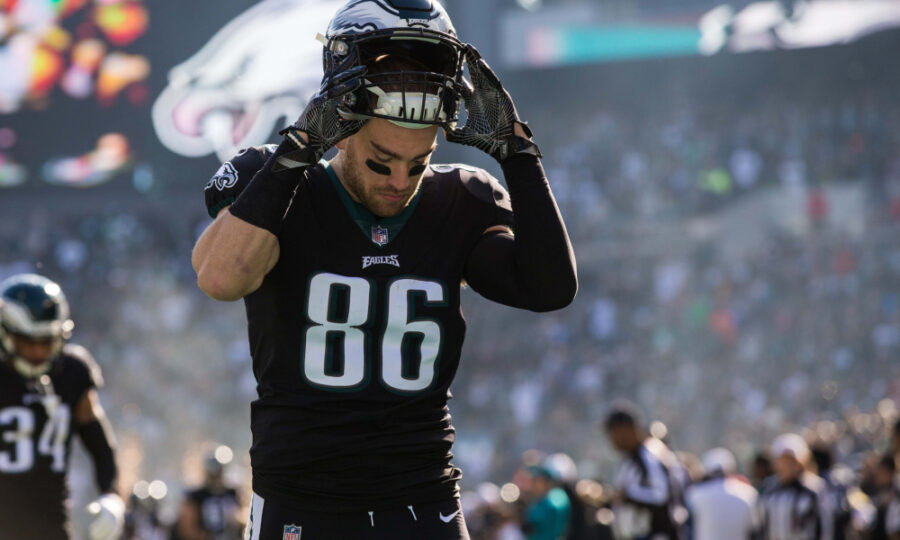 I wasn’t planning on featuring two tight ends but there’s a big window of opportunity with Zach Ertz this offseason. Rumours swirling around Philadelphia suggest Zach Ertz could be on the move and there’s some hungry teams that could use a tight end with Ertz’ talents. One team with lots of cap room plus the need for a top tight end is the Colts where he could link up with his former quarterback Carson Wentz. This would be a match made in heaven and makes a lot of sense for a team ready to take the next step and compete for another Super Bowl.

Ertz is seemingly buried as the No.2 tight end on the Eagles behind Dallas Goedert and the emotional scenes we saw from Ertz following their season ending game against Washington tell the story. Did he know his time was up and his hugely successful career in Philadelphia is over? Well only time will tell but the window left to make this move could close any day.

The second we get news on Ertz’ next career move then his value is on the rise, meaning act now. I’d like to offer something in the region of a late 2nd rounder for Ertz who I think still has a lot to offer at the age of 30. 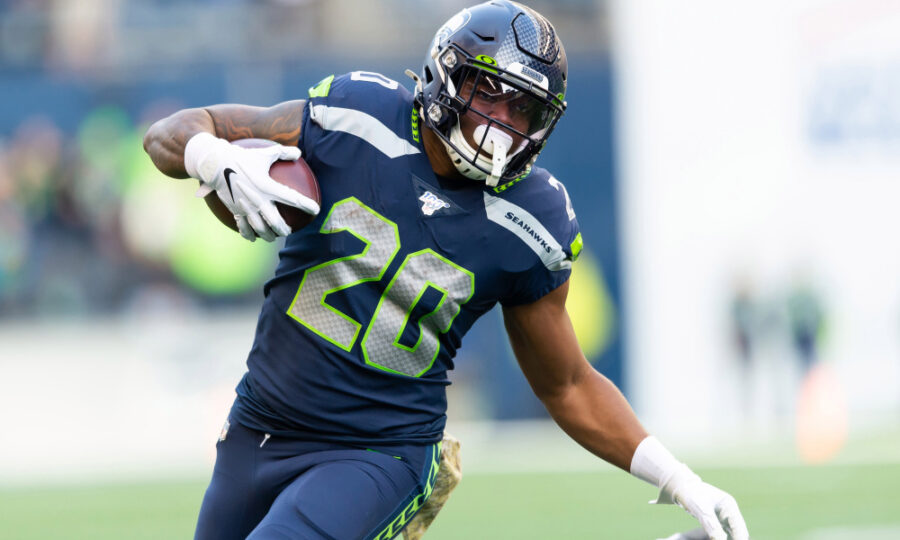 My honourable mention is Rashaad Penny, who can be acquired for next to nothing but has a shot at being a featured back in Seattle in 2021. Chris Carson and Carlos Hyde are both hitting free agency this offseason with Deejay Dallas the only other notable running back left on the roster. A lot depends on whether Seattle chooses to pursue a running back in free agency or through the draft. The other big factor is whether Penny can even get back to full health but for the cost there’s little to no risk involved and it’s a fairly high upside selection.

Pete Carroll has shown us that he’s not bothered by draft capital, if you are performing as the best running back on the team then you will be the guy and we’ve seen flashes of what Penny can do.

ALASTAIR, A DIE HARD BUCCANEERS FAN FROM NORWICH AND UP AND COMING FANTASY CONTRIBUTOR CAN BE FOUND ON HIS TWITTER PAGE – THE DYNASTY GRILL (@FFDYNASTYGRILL)

END_OF_DOCUMENT_TOKEN_TO_BE_REPLACED
Get 20% off PFF ELITE and prepare to win in 2019!