In an NFC South battle, neither the Carolina Panthers nor the Atlanta Falcons looks to be a playoff contender, but bragging rights remain on the table. In Atlanta, Head Coach Dan Quinn could be fighting for his job, with the players needing to demonstrate their worth if a new regime is brought in. Carolina, however, had few expectations of them in a rebuilding year, and over the first four weeks of the season have begun to find their identity. In Week 5, when these teams meet, there may be little at stake in terms of postseason success, but a win will symbolise much more. 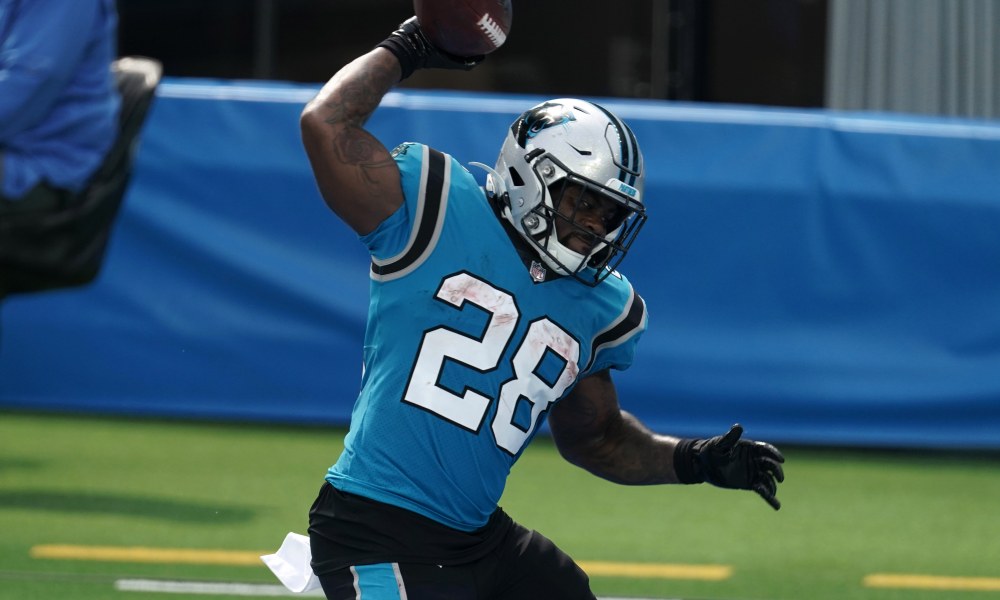 With RB Christian McCaffrey still on IR, backup RB Mike Davis has been able to allow the Panthers to mostly use the same scheme and plays without a significant drop-off. Although he’s no McCaffrey, Davis operates effectively out of a singleback formation, and can line up as a receiver, the same as McCaffrey. QB Teddy Bridgewater has minimal use in the run game, mostly scrambling when there is open field in front of him, while FB Alex Armah and RB Reggie Bonnafon handle backup roles to relieve Davis. Armah and Bonnafon mostly run through the middle, while Davis runs towards the Tackles, and is able to cut inside or bounce to the outside, depending on where the holes are. Carolina will use a few times a game their WRs, especially Curtis Samuel, on end arounds, jet sweeps and reverses, where they can use fake handoffs and double handoffs to spread the defense out and get a runner to the outside with downfield blockers.

Davis will be given handoffs on first and second down early in the game, allowing the Panthers to use some play action in the second quarter and beyond. TEs Chris Manhertz and Ian Thomas will be used at times as an extra blocker, but with 11 personnel frequently used, are sometimes a diversion for Davis to run a counter to the weak side. Carolina will use some toss plays to get Davis to the outside late in the second quarter and in the second half, but most of their run plays will be directed between the Tackles, so that later in the game the outside runs have greater chance of success. On their first or second drive, one of the WRs will be used on an end around, and every few drives after that similar runs will be used, and eventually one will be a fake handoff for Bridgewater to either scramble or pass.

The Falcons have been in the top half of the league this season in rushing yards allowed and yards per carry, but bottom half in terms of rushing TDs allowed. Atlanta will be happy to have Carolina run through the middle, as it allows them to keep LBs Deion Jones and Foyesade Oluokin lined up over the Guards, providing extra tacklers after the DL makes first contact. Jones will track Davis while he remains in the backfield, but once he moves to the outside he likely becomes the responsibility of Safety Ricardo Allen. Atlanta may opt to go for a zone defense in this game, so that they can keep extra defenders in the middle, while there is also one left in the flats to defend against the end arounds and toss plays.

Carolina largely use 3 WR combinations with dagger concepts to give Bridgewater a downfield, outside and middle-of-the-field option. Both Robby Anderson and DJ Moore are used on deep routes, on the outside, and crossing over the middle, while Samuel mostly works out of the slot, providing a shorter option outside of the numbers, or as an underneath receiver on slants and in routes. TE Thomas doesn’t run a large variety of routes, running hitch and out routes, rarely going deep or creating separation over the middle. RB Davis provides a release option underneath at times, with some swing routes to the outside, unless he moves out of the backfield, when he is used with drag routes and vertical routes along the sideline.

Bridgewater will attack the short and intermediate options early in the game, with Carolina increasing their crossing routes over the space of the first quarter. Anderson will be sent deep a few times to create space underneath, and Samuel, Moore and Thomas will be hit as they are heading towards the sideline. The Panthers will also use some WR screens to further draw the Falcons’ defense in, allowing them to give Anderson space on a deeper crossing route. Later in the game, Moore and Samuels will be given a few vertical routes on the outside, with Carolina taking a few shots, with Davis providing a check down if neither can get open. As the game progresses, the Panthers will start to stack receivers more often, especially if the Falcons are in zone defense, using quick throws and timing routes for short gains.

As stated above, Atlanta could use a zone-based defense in this game, trying to take away the short and intermediate throws. Cover 5 and Cover 6 will allow the Falcons to keep a defender in the flat against the run, as well as to defend against screens and short out routes. If the Panthers start to use more 4 WR sets, Atlanta could choose to go to Cover 2 Man, so that they can pressure Bridgewater more, but the Falcons will try and force him to throw deep more often, which is not Bridgwater’s strength.

What should we expect to see on Sunday?

The Panthers will run the ball up the middle early on in the game, before increasing outside runs and trying to get their WRs involved as runners. Bridgewater will look to attack short passing options early, hoping it creates space downfield later in the game. Their WRs will move around the field and vary their routes so that Atlanta can’t double cover one specific player too often. The Falcons will mostly use zone defense to close up shorter passing lanes, as well as defend the flat, hoping to create turnovers and incompletions with deeper passes. Some man coverage will be used to blitz Bridgewater, but the Falcons will want to take away the outside throwing lanes first and foremost.

After bringing in RB Todd Gurley in the offseason, Atlanta have remained a pass-first offense. They are using backups Brian Hill and Ito Smith regularly, but Gurley remains the lead back of the team. Gurley is used on both inside and outside runs, while Hill is mostly inside and more of a receiver to the outside, while Smith is more used for pass protection and also through the middle. With no extra blockers or deception in the run game, Atlanta rely on the RBs making reads and cutting to wherever holes are created, which explains why they have the 11th fewest rushing yards, and the equal 7th-worst yards per carry.

The Falcons will want to improve their run game in this one, especially with Carolina allowing the 4th-most yards per carry (5.1). Gurley and Hill will be given handoffs up the middle early on, so that in the second half Gurley can run counters more and cutback across the line, theoretically into space that was left as the defense followed him to one side at the start of the run. The Falcons should also use more toss plays in the second quarter and beyond, so that they can continue running up the middle in the second half without Carolina consolidating their defenders into the middle of the field. The second half should also see Atlanta use some draw plays, especially if they have had success passing the ball, allowing Gurley and Hill to run against fewer men in the box.

Carolina need to play contain against the run, and keep Gurley, Hill and Smith in the middle of the field, so that they can keep their LBs in the middle of the field as extra defenders. DEs Brian Burns and Yetur Gross-Matos will need to avoid being run out wide and creating holes inside the Tackle for Gurley to cut outside at the second level, with one of the Safeties also being used to defend against outside runs. Even if they succeed at this, the Panthers still need their LBs to make tackles when the chance comes. With DT Derrick Brown increasingly handling double teams, the Panthers could choose to shoot one of their LBs up the middle, or stunt Burns to the inside and leave the outside containment to LB Shaq Thompson.

Atlanta, much like Carolina, also operate out of 11 personnel more than any other formation, although have receivers running downfield more frequently. WR Julio Jones plays the outside and deeper 7 routes, while Calvin Ridley also goes deep and runs crossing routes, while Russell Gage provides an underneath option over the middle and sometimes to the outside, adding yards after the catch. TE Hayden Hurst mostly runs hitch and out routes, rarely more than 15 yards downfield. The RBs see little work in the passing game, providing a check down over the middle or on a slant to the outside.

Atlanta will want to get Jones going early, as he has been limited since Week 1, and he should see targets over the middle early in the game, before an increase in vertical routes later in the game. Ridley will be moved around the field, playing both inside and outside, and when not used on crossing routes with Gage underneath, will fake inside moves before turning to the outside during the first half, freeing him up to run both in and out routes in the second half. Gage and Hurst will provide QB Matt Ryan with targets inside of the numbers on comeback, curl and slant routes, setting themselves up to be downfield blockers for WR and RB screens in the second half. The Falcons will have multiple downfield receivers simultaneously, allowing Ridley, Hurst and Gage to provide intermediate targets underneath, with two working towards the sideline, and one in the middle of the field.

Carolina’s secondary will struggle to win matchups against Jones and Ridley, and so they will be forced to pressure Ryan consistently to prevent plays developing, or for Ryan to have time to throw. Burns and Gross-Matos could generate enough pressure on a four-man rush, with an occasional blitzer coming from one of the LBs or Safeties. Jeremy Chinn will be used against Hurst, the RBs and as a blitzer, with LBs Thompson and Tahir Whitehead used to try and bracket Ridley and Jones if they run over the middle, leaving the Safeties both playing deep more than they do at the line of scrimmage.

What should we expect to see on Sunday?

The Falcons will attack downfield and to the outside in the air constantly throughout the game, with receivers over the middle and underneath as well, relying on individual skill for receivers to get open, instead of through scheme and play design. They will use RBs through the middle early on, before attacking the outside with Gurley especially later in the game. The Panthers will rely on their DL getting the job done, simultaneously pressuring Ryan while containing RBs, allowing extra defenders to be committed to the passing game.

END_OF_DOCUMENT_TOKEN_TO_BE_REPLACED
Get 20% off PFF ELITE and prepare to win in 2019!