The NFL Draft is over, and we cannot head into the three-month abyss that is the offseason without looking at what all 259 selections mean for each franchise. Whilst too early to judge just how successful a draft class each team’s was, we can look at how rookies fit within schemes, where they stand on depth charts, and who we can expect to make an impact in 2021. We continue our team by team series with the Carolina Panthers:

Thanks to a healthy free agency group, and an early April trade for Sam Darnold, the Panthers squad felt largely set. With question marks still over their secondary, however, the Panthers opted to select Jaycee Horn, from South Carolina, to help bolster their most obvious problem area.

Horn is an interesting case, as he was anywhere between 1st and 5th on many draft-heads boards (our own Simon Carroll had him as CB3). Being the first cornerback off the board, ahead of the widely appreciated Patrick Surtain II, puts a little more pressure on Horn’s shoulders than is probably fair. His size and speed are what likely pushed him up the board for the Panthers, however, as they look to nullify in-division receivers such as Julio Jones and Mike Evans. Jaycee Horn isn’t the finished product, not by a long chalk. But his room for growth on top of an already promising skillset made him too tantalizing to ignore.

The Panthers had three picks on day two, and opted to give some help to their newly acquired quarterback. In the second round, wide receiver Terrance Marshall Jr, from LSU, joined the fray. Marshall was an integral part of LSU’s 2019 National Championship winning side, notching 13 touchdowns in an offense that already boasted Ja’Marr Chase and Justin Jefferson. He would return to LSU for half of 2020, taking over WR1 duties in the process, and ending with over 700 receiving yards. With Curtis Samuel moving on, Marshall will likely be the Panthers WR3 for 2021, with the scope to take on more in 2022 and beyond.

With their two third-round picks, Carolina opted for BYU tackle, Brady Christensen, and Notre Dame tight end, Tommy Tremble. Teddy Bridgewater took 31 sacks in 2020. While that’s not an atrocious number to give up, Carolina will be looking to give their new signal-caller a little more protection than his predecessor got. Christensen is unlikely to blow anyone away in 2021, but does have the ability to become a solid starter in this league, at a position where there are too few solid starters.

There’s an element of “middle child syndrome” around Tommy Tremble. Finding himself perpetually playing TE2, behind Cole Kmet and Michael Mayer, Tremble has been overlooked somewhat. Given the lack of established talent at the position, and his proficiency in pass blocking, however, Tremble has a real opportunity of making it his own in Carolina.

With seven picks on day three, Carolina attempted to balance offense and defense, taking three players on each side of the ball, and a long snapper to boot. In the fourth, they looked to replace the production of Mike Davis with Chuba Hubbard, of Oklahoma State. Hubbard, like Terrance Marshall Jr, opted out of the 2020 season part-way through, which skew his numbers somewhat. His 2019 season, however, was stellar. Over 2000 yards, 21 touchdowns, and a longest attempt of 91 yards, Hubbard is the definition of explosive. He’s unlikely to steal snaps from Christian McCaffrey, but he will make an intriguing relief option, as they look to maximize their franchise running back’s production:

“Chuba Hubbard’s decision to return to Oklahoma State in 2020 appears to be ill-judged. An explosive sophomore season saw him rack up more than 2,000 rushing yards and 221 touchdowns, but a combination of the disrupted season, injury and dare I say lethargy brought a disappointing final campaign with The Pokes. The big question for NFL scouts is whether 2020 was a blip or whether we have already seen the best of Hubbard, who on his day is a serious playmaking threat and a consistent producer for an offense. There’s no doubt the ankle injury inhibited him down the stretch, but is that all that held him back? If he can get back to 2019 form Hubbard would be an ideal lead back in a zone scheme where he can use that devastating one-cut agility to break off big chunks of yardage.”

The story of the day, however, belonged to Thomas Fletcher, of Alabama. As the sixth round wound to a close, the Panthers put a call into the Crimson Tide long snapper, to inform him he would be a Panther. The reaction to that call, from Fletcher, blew up online, as disbelief turned into sheer elation. Regardless of his role, he’ll be a fan favourite in Carolina early on.

One To Watch: Deonte Brown

Hailing from the National Champion Alabama Crimson Tide, Deonte Brown could prove to be a bit of a steal in the sixth round. The 6 foot 3, 364lb offensive guard started 24 games in Alabama, protecting both Mac Jones and Tua Tagovailoa in that time. Brown’s build immediately makes him a terrifying prospect for opposition defenders. That said, his relative lack of speed will make it difficult for the Panthers to truly get the best out of him on running downs. 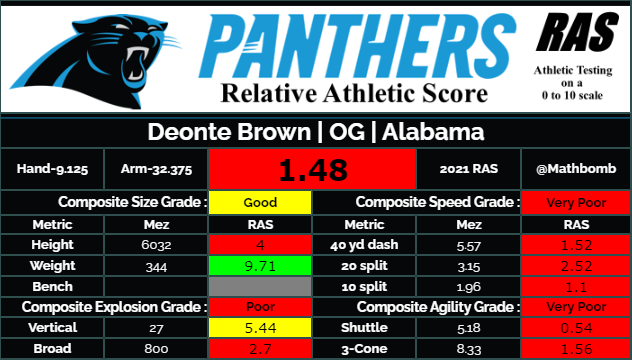 With that said, however, Brown didn’t give up a single sack in his college career. That, in itself, is incredibly impressive. He’ll have some work to do to really hit his stride in the professional game. If he reaches his lofty ceiling, however, the Panthers could well have a solution to their soft interior.

The Panthers were a little more restrained in their UDFA haul, signing a total of six names. What’s interesting is that two of those names (David Moore of Grambling State and Paddy Fisher of Northwestern) were coached by the Panthers staff at the Senior Bowl in January. UDFAs are, at best, a shot in the dark. Any information Carolina may have gleaned from that experience would certainly be handy.

Coming away from the 2021 draft, the Carolina Panthers have everything in place to be a really exciting side this season. Jaycee Horn is likely to suffer the same growing pains you get from most rookie cornerbacks, though they’ll hope his outlook beyond this season is worth it. Their passing offense has been bolstered with the addition of Terrance Marshall Jr, who joins the already excellent pairing of DJ Moore and Robby Anderson. It even looks as if their offensive line, while not completely horrible in 2019, has been reinforced enough for them to make the most of Sam Darnold.

This group of players, in conjunction with their own group of free agents, should see them at least better their 5-11 record in 2020. The pieces are there for a sustained period of success, so long as Matt Rhule and company can put them together.

END_OF_DOCUMENT_TOKEN_TO_BE_REPLACED
Get 20% off PFF ELITE and prepare to win in 2019!